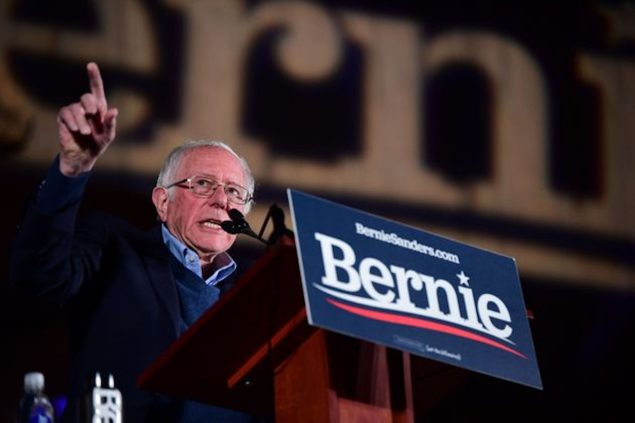 Bernie Sanders is the clear front-runner in the Democratic primary and has demonstrated his strong support among working-class Latinos.

Sen. Bernie Sanders (I-Vt.) is the projected winner of Nevada’s Democratic caucuses, holding a dominant lead over his closest rivals and cementing his front-runner status in the Democratic primary. Sanders’ latest win, and the fractured field of candidates, puts him in position to open up a potentially decisive lead in 10 days, when 14 states vote on Super Tuesday.

Sanders addressed his win to a crowd in San Antonio, Texas. “I think all of you know we won the popular vote in Iowa, we won the New Hampshire primary, and according to three networks and the AP, we have now won the Nevada caucus,” a jubilant-looking Sanders told his supporters. “In Nevada, we have just put together a multi-generational, multi-racial coalition that is not only going to win in Nevada, it’s going to sweep this country.”

Nevada, the third state to vote in the Democratic primary and the most diverse state yet to weigh in, has delivered the clearest victory of the primary cycle to date. Iowa is still grappling with recounts, and despite narrowly winning the New Hampshire primary, Sanders went into the Nevada contest behind former South Bend, Indiana, Mayor Pete Buttigieg in the delegate count.

But on Saturday, Sanders confirmed what polling has suggested for months. Not only did the senator have a double-digit lead in state polls going into the caucuses, he has long had a strong base of support among Latino voters, especially those in the working class. Latinos make up roughly 30% of the population in Nevada and made up around 19% of Democratic voters in the 2016 election cycle.

Since Sanders jumped into the race, he has polled more favorably with Latino voters than the rest of the Democratic presidential field — and it’s a base his campaign has specifically organized around with the slogan “Unidos con Bernie.”

Two prominent Latino immigrant rights groups, Mijente and Make the Road Action, endorsed Sanders and helped organize on the ground in Nevada. His campaign held a Spanish language town hall, with the help of surrogate and progressive icon Rep. Alexandria Ocasio-Cortez (D-N.Y.) in the state, and organized a soccer tournament at a Las Vegas high school to mobilize Latino voters.

Last week, Sanders faced a potential setback in Nevada when the Culinary Workers Union, one of the more powerful unions in the state, criticized his “Medicare for All” proposal.

The union posted flyers in hotel and casino employee areas, warning that Sanders’ plans for health care could strip the union of its own health care program, according to The Nevada Independent. The union ultimately did not endorse any candidate for president, though it mentioned its strong ties to former Vice President Joe Biden. (Biden benefited from the formal support of the International Brotherhood of Electrical Workers, which also operates its own multi-employer health insurance plan and trotted out its members to speak out against Medicare for All in a digital video.)

But on caucus day, Sanders showed that the political positions of the union’s leaders didn’t necessarily match those of its members.

And Sanders benefited from an organized labor movement in Nevada that, as in much of the rest of the country, is fiercely divided when it comes to Sanders’ signature policy of Medicare for All. The state’s largest local teachers union, the Clark County Education Association, endorsed Sanders in part because the union has struggled to protect its health care benefits and is less wary of a transition to a single government plan. Nevada’s SEIU Local 1107, which unlike CCEA did not endorse in the race, also condemned the Culinary Union’s critical treatment of Medicare for All, arguing that pitting union health care plans against Medicare for All created a “false choice.”

At the Rancho High School caucus site in northeast Las Vegas, Sanders swept to victory in both precincts, while no other candidate won any delegates.

Rather than focus on the high-minded policy debates over health care and legislative pragmatism that have dominated the national media narratives, caucus-goers who expressed their preference for Sanders there tended to refer broadly to his commitment to expanding access to health care and education, and immigration reform. Several also cited what they see as his authenticity, honed over decades of progressive activism.

“He has been fighting for our rights since he was younger,” said Allison Rangel, a restaurant hostess.

Rodrigo Loera, a warehouse manager, initially expressed a preference for Buttigieg. But after Buttigieg failed to reach viability in his precinct, Loera switched to Sanders.

“I like his ideas … the way that he wants to change the way that the country is going right now,” Loera said, singling out Sanders’ plan to reform the health care system.

The Nevada caucuses went notably more smoothly than the first caucus-style contest of the cycle. Iowa’s Democratic Party is recounting votes from 10 precincts in the state after the apparent leaders in that race, Sanders and Buttigieg, both requested limited recounts.

Nevada is also shaping up to be somewhat of a comeback for Biden. After disappointing showings in Iowa and New Hampshire, where he came in fourth and fifth respectively, Biden said his strength would show through when communities of color began casting their votes.

Biden, who drew criticism for leaving New Hampshire well before results came in, held a caucus day celebration in Nevada after voting, unlike Sanders, who spent the day campaigning in Texas — a Super Tuesday state.

Biden took the opportunity to celebrate a rebound performance, even though it was still unclear how he would place. “Y’all did it for me!” he told a crowd of supporters at an IBEW union hall in Las Vegas. Someone shouted back: “The comeback kid!”

“We’re in a position now to move on in a way that we haven’t been until this moment,” Biden said.

Biden now heads to South Carolina, where he has been polling ahead of the field ― although Sanders has been closing the gap in South Carolina as well.

Sen. Elizabeth Warren (D-Mass.) stepped into the spotlight during the Democratic debate in Las Vegas earlier this week, grilling her opponents and demonstrating she’s still got her fighting spirit. She trained an especially fiery line of questioning on former New York City Mayor Michael Bloomberg, who has decided not to compete in the first four states of the Democratic primary. She heads to South Carolina without any clear victories to her name.

The stakes of the caucus results are especially high for Buttigieg, who had hoped a strong performance in the state would prove his appeal beyond the predominantly white states of Iowa and New Hampshire.

As of Saturday night, a full picture of how Buttigieg fared with the more diverse electorate had yet to emerge. Still, the former mayor sounded a triumphant note in a speech to supporters in Las Vegas, before pivoting to a lengthy attack on Sanders. He reiterated his criticism that Sanders’ Medicare for All plan would deprive Americans of the option to keep their private insurance coverage. Buttigieg began airing television ads on Friday in South Carolina that blast Sanders by name for “forcing over 122 million Americans off their private plans,” including 22 million seniors covered by Medicare’s private variant, Medicare Advantage.

Buttigieg expanded his critique on Saturday, framing the health care question as one of several elements of Sanders’ agenda and approach that make him that much less capable of defeating Trump in November.

“I believe that the best way defeat Donald Trump and deliver for the American people is to broaden and galvanize the majority that supports us on the critical issues,” he said. “Sen. Sanders believes in an inflexible, ideological revolution that leaves out most Democrats, not to mention most Americans.”

Buttigieg’s remarks likely herald a new stage of the Democratic primary where Sanders’ undisputed status as a front-runner is liable to draw more aggressive attacks from his rivals.

Warren hinted in a speech on Friday that she plans to step up her efforts to draw contrasts with Sanders. She called out “people like Bernie” for opposing the elimination of the filibuster, which she said gives the gun industry and other corporate lobbies veto power on legislation. (Sanders supports a filibuster reform known as the “talking filibuster” that would require any senator obstructing legislation to hold the Senate floor. He has also vowed to use budget reconciliation, which requires a simple majority, to pass as much ambitious legislation as possible.)

Biden also took the opportunity to rip Sanders in his remarks in Las Vegas on Saturday, albeit with more subtlety than Buttigieg.

“I promise you I wasn’t talking about running in a Democratic primary against [Obama] in 2012,” Biden said, referring to Sanders’ brief openness to backing a primary challenge against then-President Barack Obama over Obama’s pursuit of Social Security cuts. (Sanders has denied a report in The Atlantic that he himself was considering challenging Obama.)

Biden also alluded to a Washington Post report on Friday that U.S. intelligence agencies have briefed Sanders that the Russian government is trying, in unspecified ways, to help Sanders’ bid.

“We’re going to have more help coming from [Russian President] Vladimir Putin, who wants somebody who he doesn’t think can beat Trump,” Biden said.