Bernie Sanders Is The Front-Runner 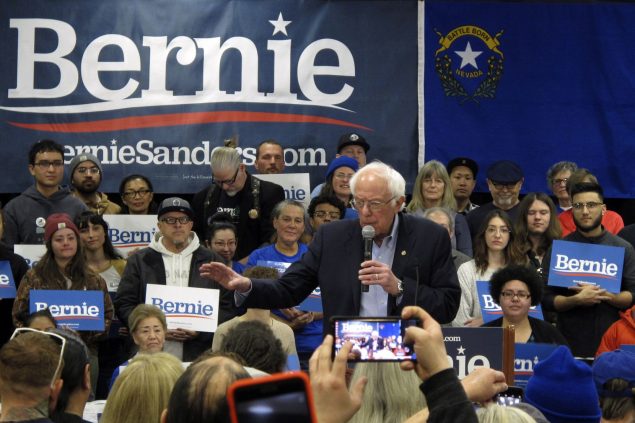 With 60 percent of precincts reporting in Nevada, it’s time for us to turn our 2020 primary forecast back on, as we think the results we have are pretty representative and the topline picture appears set.

With 60 percent of precincts reporting in Nevada, it’s time for us to turn our 2020 primary forecast back on, as we think the results we have are pretty representative and the topline picture appears set. Sen. Bernie Sanders won, and he won big. As of the time of this writing, he leads the initial popular vote in Nevada by 16 percentage points. He also gained the most votes on realignment: He leads the final, realigned popular vote by 21 points and is even further ahead, 26 points, in county convention delegates. In short, he’s projected to receive the bulk of Nevada’s 36 national convention delegates. Here’s The New York Times’s results (they seem to have more of the result in than other outlets): 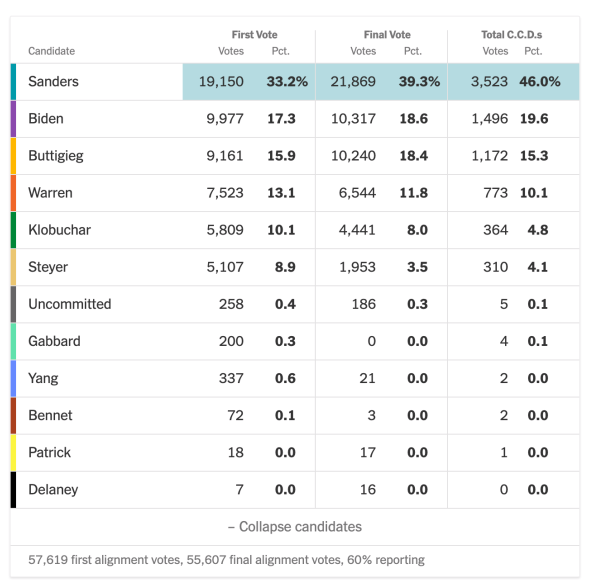 It was, as editor-in-chief Nate Silver wrote yesterday, a decidedly good night for Sanders.

Our model had already anticipated a pretty good showing for Sanders in Nevada; we expected him to win, 39 percent of the final vote, on average — exactly what he won. So there isn’t a huge change in how the model sees the race. But Sanders’s outlook still meaningfully improved: His chances of winning a majority of pledged delegates are up 6 points, to 46 percent. In fact, as you can see in the table below, he is the only candidate whose odds of clinching the nomination significantly improved.

Former Vice President Joe Biden did see a small uptick in our overall forecast thanks to a good CBS/YouGov South Carolina poll released on Sunday that put him at 28 percent, and 5 points ahead of the rest of the field. It also edged him ahead of Sanders in our South Carolina forecast, giving him a 1 in 2 chance of winning the most votes, compared with Sanders’s 2 in 5 shot. Similarly, a national CBS News/YouGov poll put Sen. Elizabeth Warren in second place at 19 percent, which helped her overall odds tick up ever so slightly in our forecast despite a disappointing fourth-place finish in Nevada.

But perhaps the biggest wildcard after Nevada is that former New York Mayor Michael Bloomberg took the biggest hit of any candidate, dropping more than 4 points in our forecast, even though he wasn’t on the ballot in Nevada. That’s because we’re starting to get some post-debate polls, and they do not have good numbers for Bloomberg. In that national YouGov poll, Bloomberg was in fourth with 13 percent, and in a Morning Consult poll released on Friday, he was in third with 17 percent, down 3 points from Morning Consult’s pre-debate poll. It’s not necessarily clear that only Biden will benefit from a Bloomberg stumble, but it certainly holds good news for him at this point, especially if he holds onto his second place finish in Nevada.

That voting will end without anyone winning a pledged-delegate majority is still the second most likely outcome in our forecast after a Sanders win, but Sanders’s decisive victory in Nevada helped him put a little distance between himself and that more chaotic scenario. And remember, there are also plenty of eventualities in which Sanders wins the nomination with only a plurality of pledged delegates — his chances of winning the most delegates (though not necessarily a majority), rose from 61 percent before Nevada to 69 percent after.

The model now also sees Sanders as more likely to win in the two most delegate-rich Super Tuesday states: California and Texas and, even though he may no longer be in the lead in South Carolina, things are incredibly close between him and Biden there, and it’s probably best thought of as a tie at this point.

Put simply, the model now puts Sanders in a modestly stronger position across the board. His chances of winning rose in a bunch of states. As always in the wake of a caucus or primary, treat the forecast as a bit of an educated guess until we get more polls — the model will quickly update if new polling differs from what it expects. But the picture here isn’t all that fuzzy — Sanders is the front-runner in a race that remains extremely fluid.