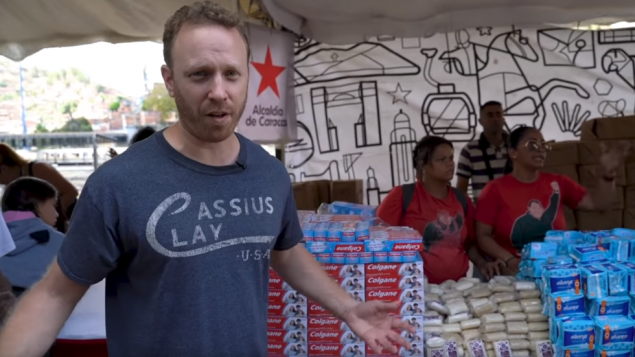 There is plenty of toothpaste in Venezuela says Gray Zone journalist Max Blumenthal. In this video he shows how the corporate media’s lies about the situation in Venezuela are continuing to be scotched, simply by visiting the country’s shops and markets.

Journalist Max Blumenthal visited state-subsidized food markets outside Caracas and, in a new video, showed that what the corporate media says doesn’t exist in Venezuela can actually be easily found right at a local market.

Blumenthal toured several state-subsidized markets outside the Venezuelan capital, witnessing “hundreds of people”purchasing basic goods there. He says that the produce is “sold well-below market value,” adding that the prices appear to be quite affordable for locals as well. The video shows locals leaving with large bags of groceries from the markets.

“Behind me is toothpaste which CNN said does not exist in Venezuela,” Blumenthal says.
The remark is followed by an expert from the broadcaster’s reporting about US ‘humanitarian aid’ which contains the precious commodity that President Nicolas Maduro has supposedly deprived his people of.

“We all are in peace here. Here we don’t want war,” a woman at the market says, adding that she doesn’t want “foreigners”to spark war. “And tell the news that we don’t need anything. What we want is for the US to lift the blockade it has put on us in Venezuela. We are free.”

Blumenthal, who is currently reporting from Venezuela, explained in an earlier interview with RT that many poor Venezuelans believe that their crisis stems from the US sanctions noose and the absence of the billions of dollars that Washington seized or prevented from entering the economy. Meanwhile those who hate Maduro and the whole idea of Chavismo are usually much wealthier people “who need humanitarian aid the least.”

Blumenthal said that he’s not denying that there is an economic crisis here but added that authorities are actively working to help the population.

Washington, however, appears to be adamant to push its ‘humanitarian aid’ into the country, despite the chaos it caused on the border between Venezuela and Colombia.

“What happened yesterday is not going to deter us from getting humanitarian aid into Venezuela,” a senior official with the US administration told reporters on Sunday.

On Saturday, the ‘aid convoy’ was blocked by Venezuelan troops and several trucks were torched, reportedly by US-backed opposition activists who were seen preparing Molotov cocktails before the shipments caught fire. US Vice President Mike Pence is expected to announce “concrete steps” on how the US will try and push in a new batch of ‘aid’ on Monday, while meeting regional leaders in Bogota, Colombia.