BCV: Venezuelan economy contracted by 23.7 percent in first trimester of 2019 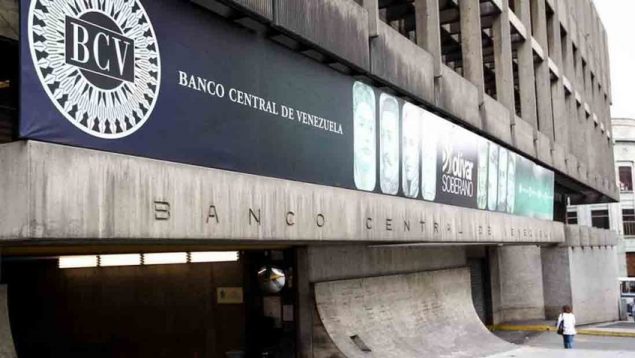 The Venezuelan economy has contracted by over 60 percent since 2014, according to the Central Bank. (Archive)

Venezuela lost almost a quarter of its gross domestic product (GDP) in the first three months of 2019.

According to newly released figures from the Venezuelan Central Bank (BCV), the South American country’s GDP fell from 78.5 billion to 59.8 billion in the first trimester of 2019. The figure represents a 26.7 percent fall with respect to the same period of 2018.

The Venezuelan economy has contracted by 63.6 percent since 2014.

Venezuela’s oil sector, the source of over ninety percent of the country’s export earnings, contracted by 19.1 percent, while the non-oil sector fell by 27.3 percent.

Venezuela’s economy has been hard hit by US economic sanctions, which were significantly ramped up this year. In January, the Trump administration imposed an oil embargo barring crude sales to the United States, Venezuela’s number one cash buyer.

Washington has since issued further measures targeting strategic economic sectors, including a comprehensive embargo in August prohibiting all dealings with the Venezuelan state and authorizing secondary sanctions against third parties. Venezuela’s economy has been projected to contract by 37.3 percent in 2019.

The BCV likewise published monthly inflation figures for the first time since May. The body had previously withheld data for over three years.

According to the BCV, inflation registered at 52.2 percent in September, above the 50 percent hyperinflation threshold, having climbed from 34,6 percent in August. The numbers differ from those published by the opposition-controlled National Assembly (AN), which had inflation at 65.2 and 23.5 percent, in August and September, respectively. 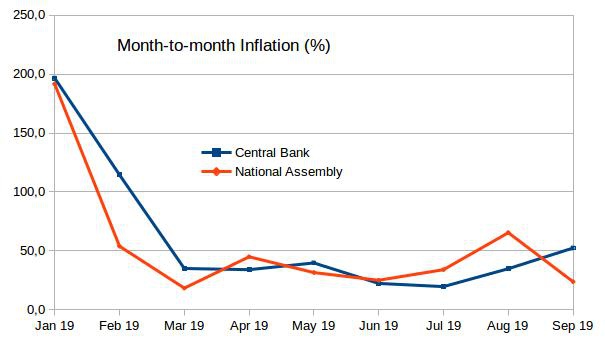 Monthly inflation in 2019 according to the BCV (blue) and National Assembly (orange). (Venezuelanalysis)

The country had previously experienced an extended period of hyperinflation. While the BCV and the AN differ on when this period began, both bodies agree it ended in March 2019.

However, the measures failed to deter hyperinflation, forcing the government to raise salaries by devaluing the Petro-Bolivar exchange rate. The Central Bank also resorted in late 2018 to aggressively devaluing the Bolivar with respect to the dollar, before lifting foreign exchange controls altogether in May.

The liberalization, alongside the restriction on the amount of Bolivars in circulation and a clampdown on salary raises, has been credited with slowing inflation in 2019. However, analysts warn that the contraction of aggregate demand, due to the loss of purchasing power, can result in longer-term economic stagnation.

Lucas Koerner reporting from Philadelphia and Ricardo Vaz from Caracas.