BBC: ‘HARDtalk’ less than hard talking in interview with Saakashvili 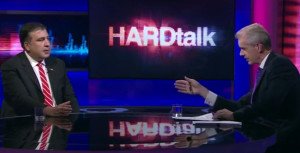 BBC’s HARDtalk program interviewed the former president of Georgia and fugitive from Georgian justice, Mikheil Saakashvili, on July 15. Saakashvili was appointed last month to the post of “governor” of the region of Odessa by Ukrainian president Petro Poroshenko. While some important questions were asked of him–the criminal charges he faces in Georgia, his appointment as a foreigner to govern one of Ukraine’s most important cities and industrial regions–questions on other subjects were avoided. These included questions about the Odessa Massacre of May 2, 2014, the subsequent failure of authorities to properly investigate, the vigilante justice currently prevailing in the streets of Odessa and the plans of the Kyiv government to privatize the remaining state-owned industries and services of Ukraine, many of which are located in Odessa.


BBC also avoided questioning Saakashvili over his role as then-president of Georgia in provoking a war in South Ossetia in 2008, including his decision to intensely shell the capital city of the territory. (The BBC host voiced the Western interpretation that Saakashvili’s unfortunate adventure in 2008 led to “Russian occupation” of former regions of the country, including South Ossetia and Abkhazia.)