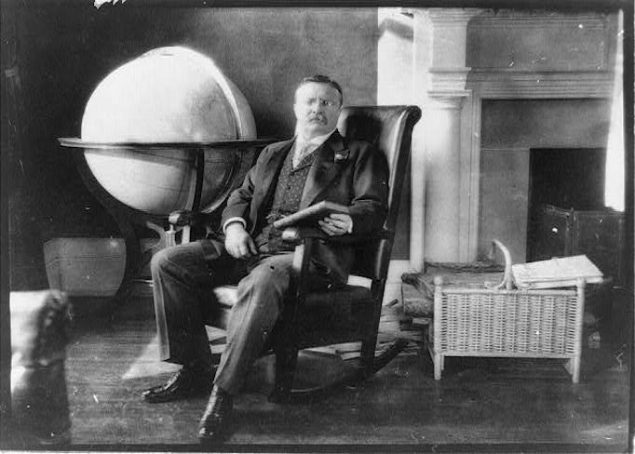 A book, a rocking chair, some well seasoned logs and a giant globe: what else do you need? President Theodore Roosevelt at home

A basic income by itself will not transform society. It is merely a necessity as we brace ourselves to confront the more frightening ecological crisis that we should be using our time to overcome. Let us get it done.

When the Spanish flu killed over 40 million people across the world exactly one hundred years ago, there was little economic crisis in its aftermath. Today, while we must hope that the death toll from the coronavirus pandemic will be much smaller, the economic crisis will be far worse – or, at least, could be, and judging by what governments have done so far, will be.

The main reason is that today’s economic system is extremely fragile, as a result of an era of free market dogma in which reforms have allowed more and more of the income and wealth to flow to the owners of property – physical, financial and ‘intellectual’. What is best called rentier capitalism has led to three key outcomes that reflect the current fragility.

First, private and household debt around the world has never been higher. In the United States, it is over 150% of national income, higher than in the Great Depression. In the UK, unsecured personal debt has risen remorselessly in the past decade to stand at over £400 billion, double what it was at the beginning of the century. Total household debt has also more than doubled. Last year, well before the virus struck, the official Office for Budget Responsibility forecast that total household debt would pass £2.4 trillion by 2023-4, over £86,000 for every household.

Private indebtedness has been growing even faster in developing countries, having risen to 170% of GDP. What all this means is that even a modest economic downturn will push millions of people into being unable to service their debts. Many more lose their homes, creep onto the streets, and suffer social illnesses and rising mortality, perhaps dwarfing the number dying from the virus. Their very existence will help keep the pandemic spreading.

Second, corporations are also weighed down by debt; many will go bankrupt. They will not be saved by tax breaks and more credit; they need people to be able and willing to buy their goods. Third, and symptomatic of government bias, the financial sector has been allowed to become grossly inflated. In Britain today, it amounts to over 300% of national income; in the 1980s, it was only 100%. In other countries, it is also inflated, although on average not by as much. Much of what goes on in financial markets is speculative, with little connection to the production of basic goods and services. It is a huge bubble, and we all know what happens to bubbles as they grow bigger.

Added to those three indicators of economic fragility, the precariat has grown to being easily the biggest class – people living bits-and-pieces lives, with low and uncertain incomes, lacking access to secure benefits and losing social, economic and cultural rights. The precariat will swell in the months to come.

As I have argued in a new book out this week, the path to a Good Society was already blocked by Eight Giants – Inequality, Insecurity, Debt, Stress, Precarity, advancing Robots, the threat of Extinction and a drift to Neo-Fascist Populism. The coronavirus is the Ninth.

And here comes the opportunity. We can confront and weaken the giants. The only sensible economic response to this pandemic and the impending economic meltdown is to give ordinary people greater resilience. The only sensible, equitable and effective way to do that is by providing everybody with a modest regular basic income, as a right, paid to every legal resident in Britain, without silly conditions as with Universal Credit, the most vindictive social policy in the past century.

A modest basic income is definitely affordable. Think of the billions being poured into the financial markets. Think of the fact that every year the Treasury operates over 1,100 forms of tax reliefs that favour higher-income groups to the tune of over £400 billion, according to the government’s own figures. As shown elsewhere, there is no need to raise the standard rate of income tax in order to pay everyone at least £100 a week. That is not enough to cover people’s needs, but it would make a substantial difference to those on low incomes and facing those debts.

A basic income would not be a panacea. But unless it is introduced very soon, what we economists call a multiplier effect will drag the country into the worst economic recession since the Great Depression. If government repeats what was done after the 2008 financial crisis, that will merely stoke up the bubble economy for an even more drastic recession down the line.

Now, dear Idlers, let us look on the bright side of life. Suppose a basic income came into effect, with the prospect of its value rising as funds were mobilised and as the need for it was recognised by politicians with spaghetti spines. I hope the government will have the wisdom to establish an independent cross-party Basic Income Commission, to oversee its implementation and to adjust the weekly amount depending on the severity of the recession and the funding, making it an automatic stabiliser, and depoliticising it. I would nominate someone like Caroline Lucas to chair the Commission.

Leaving that aside, our lifestyles would soon begin to change. With the lockdown, we are already relearning the art of using small spaces, the art of idling constructively and creatively, the art of valuable work. Some of us have planted more vegetables in the past week or so than at any time in our lives.

We have broken the addiction to endless football matches and even heard of friends reaching saturation point in watching tedious Netflix mind-sapping entertainment. Some of us are dusting down books that for many years were perched on shelves and described as ‘to be read in the future’.

Some of us, we should fervently hope, are learning the art of schole – being political in the contemplative deliberative sense that is so essential if we are to confront the disinformation and manipulative lies of populist politicians and their backers.

A basic income by itself will not transform society. It is merely a necessity as we brace ourselves to confront the more frightening ecological crisis that we should be using our time to overcome. Let us get it done.

Guy Standing is a Professorial Research Associate at SOAS University of London and a founding member and honorary co-president of the Basic Income Earth Network (BIEN), a non-governmental organisation that promotes a basic income for all. He is author of several books including Plunder of the Commons (Pelican, 2019), The Corruption of Capitalism (Biteback, 2016) and Basic Income And How We Can Make It Happen(Pelican, 2017). His new book is Battling Eight Giants: Basic Income Now (Bloomsbury).