At the United Nations, Trump threatens a genocide against North Korea

As President Trump taunts North Korea’s leader with schoolyard insults, the terrifying possibility is that his threat to “totally destroy” a country of 25 million people could involve the U.S. in another genocide. 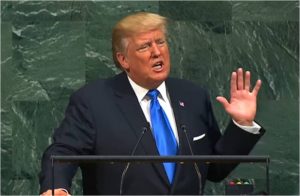 Madman Trump threatens North Korea and the world in a speech to the UN General Assembly on Sept 19, 2017

The level of insult and hostile name-calling between world leaders was taken to a new extreme by Donald Trump in his speech before the UN General Assembly on September 19. In his preferred rhetoric replete with saber rattling, Trump’s comments included,  “The United States has great strength and patience, but if it is forced to defend itself or its allies, we will have no choice but to totally destroy North Korea.”

Are we becoming numb to the tirades of the President? His apologists claim his words don’t necessarily reflect U.S. policy, however the threat to destroy an entire nation of 25 million people reveals a further willingness to embrace nuclear war. There are many Americans who protest his vision, but the United States seems relatively complacent considering his belligerence.

In the same speech, rather than envisioning an improvement in U.S.-Iranian relations, Trump condemned their leadership without any room for diplomacy: “The Iranian government masks a corrupt dictatorship behind the false guise of a democracy. It has turned a wealthy country with a rich history and culture into an economically depleted rogue state whose chief exports are violence, bloodshed, and chaos.”

Iranian President Hassan Rouhani, in addition to responding specifically to Trump’s threats to scrap the 2015 nuclear agreement, added, “Mr. Trump was offensive to Iran, and we are waiting for Mr. Trump to apologize to the people of Iran.”

Behind Trump’s words is a drumbeat that is all too familiar to anyone who has read, studied or lived through war; and seen how threats and hostility can turn into madness and violence. When it comes to war there is an irrepressible and repetitive pattern where self-righteousness and nationalism mix to make a poisonous, explosive cocktail, blinding opponents to the humanity of their adversaries.

Although Trump points his finger at leadership, the implication is that we should fear and hate an enemy with no room for compromise; and eventually embrace war against an entire population. By dehumanizing and demonizing a leader, politicians give emotional foundation to aggression against a nation.

It doesn’t matter which “side” you are on. The rhetoric has been the same around the world and throughout history; all war promoters have an identical chant. They rise to power with claims of devotion to peace; devolving with threats to scapegoats, and eventually embracing conflict.

Consider this extract from Hitler’s speech to the Reichstag on January 30, 1939: “These other nations are continually being stirred up to hatred of Germany and the German people by Jewish and non-Jewish agitators. And so, should the warmongers achieve what they are aiming at, our own people would be landed in a situation for which they would be psychologically quite unprepared and which they would thus fail to grasp. …

“The German nation must know who the men are who want to bring about a war by hook or by crook. It is my conviction that these people are mistaken in their calculations, for when once National Socialist Propaganda is devoted to the answering of attacks, we shall succeed just as we succeeded inside Germany herself in overcoming, through the convincing power of our propaganda, the Jewish world enemy. …”

Hitler rose to power repeatedly claiming he wanted peace (as late as 1939) and economic stability for Germany. Enough of the German people were persuaded that they had suffered at the hands of horrific foreigners to embrace Hitler’s vision. He was able to convince them that “the” Russians, “the” Americans, “the” Gypsies, “the” British, and “the” Jews were conspiring against the greatest nation on the planet.

Hitler went on to attack Germany’s neighbors, justifying the aggression as necessary defense. His mad reversals exemplify how a leader can ignite the insanity of war. Not only does history repeat itself, but for centuries, conflicted leaders across all political persuasions have sown hatred as a precursor to war.

When economic, social, political or environmental crises arise or disaster looms, political leaders begin by verbally attacking the “enemy” — identifying appropriate scapegoats — in preparation for military action. The human tendency to direct anger and distress onto “foreigners” is the favorite tool of dark politicians.

Despite progress in many areas of human endeavor, people in all countries are still fed national stereotypes condemning entire populations or cultures as sub-human and worthy of aggression.

Yet among North Koreans, Iranians, Russians, Israelis, French, Americans — and of course, all nationalities — there is a diversity of perspective, feelings and lifestyle that is often falsely summed up with incendiary linguistics. When an entire population is glossed together as “the” Germans, “the” Cubans, “the” Chinese, etc., it removes individuality from potential enemies; a necessity for war; and certainly if nuclear bombs will be dropped on millions of civilians.

Trump seems to be willing to obliterate “the” Koreans. It is not just the North, as in a war scenario, South Korea, by all forecasts, will be pulverized by the North Korean response or as “collateral damage.”

In contrast to the risky bravado of Trump (only days after his UN speech), the South Korean government approved an $8 million humanitarian aid package for the North. While the U.S. president adds fuel to the fire from thousands of miles away, most South Koreans would rather find a path to peace.

The President stands before the world at the United Nations and says of North Korean leader Kim Jong Un, “Rocket Man is on a suicide mission for himself and for his regime.” Subsequently, he signed an order for the Treasury department to target businesses and banks doing business with North Korea. One can only wonder what reaction he expects from Kim other than continued escalation of hostilities.

In the first North Korean response to Trump’s threats, their foreign minister, Ri Yong-ho, said, “There is a saying that the marching goes on even when dogs bark.” Kim responded both to Trump’s speech and executive order with a hostile statement that included, “Action is the best option in treating the dotard, who, hard of hearing, is uttering only what he wants to say.”

Trump, as he escalates the potential for a major war, is proving himself to be more like Hitler than many people would like to believe. He claims to want peace while setting a course toward war. He always thinks he is right and easily finds others to blame. And most importantly, by threatening to “totally destroy” an entire country, Trump is suggesting that the United States commit genocide and possibly launch a new World War.

David Marks is a veteran documentary filmmaker and investigative reporter. His work includes films for the BBC and PBS, including Nazi Gold, on the role of Switzerland in WWII and biographies of Jimi Hendrix and Frank Sinatra.