As Trump flip-flops on Iran talks, the reality is that the ‘crazed’ rogue leader now sits in Washington not Tehran 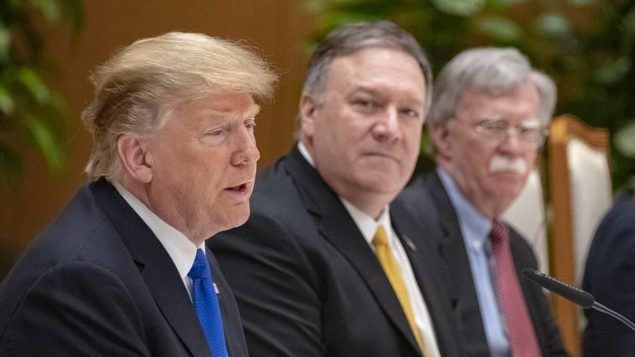 The US is not confronting the lunatic state which Bolton and Pompeo have nightmared up for Trump, but a nation governed by bravely defiant, ruthless and calculating men

History in the Middle East is unkind to us westerners. Just when we thought we were the good guys and the Iranians were the bad guys, here comes the ghostly, hopeless possibility of a Trump-Rouhani summit to remind us that the apparent lunatic is the US president and the rational, sane leader who is supposed to talk to him is the president of the Islamic Republic of Iran. All these shenanigans are fantasy, of course – like the “imminent” war between America and Iran – of which more later.

As for the Israelis, they don’t want the man who thinks he might be “King of Israel” talking to the Hitlerite Persians. They suddenly sprayed Iran’s local Middle East proxies with drone-fired rockets – in Iraq, Syria and Lebanon – just in case the wretched, financially broken and inflation-doomed Iranians were tempted to chat to the crackpot in the White House. But the Israelis wasted their ammunition. Rouhani is not mad. America has to drop its sanctions against Iran if Trump wants to talk, he said.

It still amazes me that we have to take all this stuff at face value. No sooner had Trump waffled on about Rouhani being “the great negotiator” than we saw all the White House correspondents dutifully taking this nonsense down in their notebooks – as if the American president was presidential, as if the old dream-bag was real, as if what he was saying had the slightest bearing on reality.

And when Rouhani made it clear that he was not interested in “photo-ops” – an obvious allusion to the pictures of Trump and Little Rocket Man – what did the po-faced Washington Post tell us in its subsequent report? Why, that Rouhani had “dashed hopes of a potential meeting with his US counterpart”. Ye Gods! What “hopes” do they still have in their homegrown crackpot president after these two and a half years of his threats and lies and racism? Have they learned nothing?

It’s as if – for the American media – Trump is unhinged in Washington but a Kissinger the moment he lands in Biarritz (or London or Riyadh or Panmunjom or a Scottish golf course, or perhaps, one day, Greenland). And Rouhani – who may be a “great negotiator” but is also a very ruthless man – is therefore supposed to play the role of Iran’s previous president, the raving, crazed, Holocaust-denying Mahmoud Ahmadinejad.

Indeed, had Ahmadinejad’s further political ambitions not been firmly crushed by his country’s “supreme leader”, Ayatollah Khamenei, we might just have witnessed a meeting between two of the world’s leading political nutcases. Ahmadinejad, it may be recalled, was the Iranian who claimed that a holy cloud was suspended over his head for 20 minutes when he addressed the United Nations in New York. Now that is a phenomenon which Trump may also have experienced – although at least he had the good sense not to tell us of it.

Ahmadinejad, you may also remember, was the president whose claim to have won the 2009 presidential elections brought millions of protestors onto the streets of Iranian cities until they were brutalised and imprisoned into submission. His cheeky smile, chipmunk eyes and Spanish armada beard could not persuade Iranians that the “alternative facts” of his presidential victory were real.

Everyone knew that Ahmadinejad would never be given a finger on any nuclear button – many doubted if he knew the difference between nuclear physics and electricity – but he provided at the time a hate figure to rival Gaddafi or any other of the ravers of the Middle East.

But now Trump wears Ahmadinejad’s international mantle of insanity and the Iranian presidential seat is today held by a far more pragmatic individual. For let’s not be romantic about Hassan Rouhani. Back in 1999, when he was a humble deputy chief of Iran’s Supreme National Security Council, Rouhani condemned pro-democracy demonstrators as “muhareb” and “mofsad” (corrupt on earth) – opponents of the Islamic Republic, whose punishment would be death.

In the first eight months after Rouhani became president in 2013, the Iranian state hanged at least 537 people. In January of 2014, he had, according to a report in the Arabic daily Al-Sharq Al-Awsat, visited Ahwaz to deal with “a number of sensitive files” left untouched by Ahmadinejad. These included Hashem Shaabani and Hadi Rashedi – both human rights activists in the minority Arab community in southwest Iran – who had been condemned to death for “waging war on God”, “spreading corruption on earth” and “questioning the principle of velayat-e faqih” (guardianship of the jurist).

Shaabani’s poetry, in both Persian and Arabic, was famous; he was a founder of an institute which encouraged Arabic literature and culture among Iranians. Rouhani signed off on the executions; Shaabani and Rashedi were hanged in a still-unidentified prison.

But it is Rouhani’s negotiating skill which has apparently impressed Trump, who also has little time for minorities. And when you recall that one of Trump’s Republican predecessors in the White House, Ronald Reagan, arranged for the Israelis to deliver missiles to Iran in 1985 in return for the release of US hostages in Beirut, you can see why Trump might think it strange that Rouhani would turn down a meeting with him. After all, during the Iran-Contra affair the then Iranian speaker of parliament, Akbar Hashemi Rafsanjani, was deeply involved in the enterprise.

But even if Rouhani was fool enough to flirt with Trump’s offer – which he was not – his fate would have been similar to the poet Shaabani’s if he had dared to talk to the US president without the full restoration of the nuclear treaty.

It doesn’t take much spreading of “corruption on earth” in Iran – let alone disavowing the views of the Supreme Leader Khamanei – to catapult a learned cleric into prison. Having learned from his foreign minister in Biarritz what the American deal was supposed to be, Rouhani wisely did not touch it. The US had broken the nuclear treaty and reimposed sanctions – so Trump would have to rejoin the treaty signatories and lift sanctions for any hope of a meeting with the president of the Islamic Republic.

Of course, the Iranians will no more go to war with America than America will go to war with Iran. We all know that – except for those who blast us all with “brink-of-war” scenarios in the Gulf. We’ve been through Iranian ship-minings in 1987 without declarations of war. Besides, what’s so new about an Iran insisting on its “sovereign” right to peaceful nuclear power?

When the shah of Iran wanted to acquire nuclear technology in 1974, according to documents in the US National Security Archive, he said that Iran had an “inalienable right” to the nuclear cycle and that it would not accept obligations “dictated by the nuclear-have nations”.

Which is pretty much what Iran did accept in the nuclear agreement which Trump tore up on behalf of the United States. And I still have a clipping from The Times of November 1972, in which my then colleague David Housego was reporting from Tehran that the shah had declared that Iran’s defensive frontiers extended beyond the Persian Gulf into the Indian Ocean!

In five years, the shah calculated, his arms build-up would make Iran the largest military power in the Middle East. The shah ruled with torture and executions, was crazed about the dangers of communism, and power-mad to the extent of celebrating his empire’s rule in 1971 with what he called “the biggest party on earth” in the ruins of Persepolis. How Trump would love to have been there.

Well, Macron may be able to turn himself into the “Great G7 Intermediary”, although all others who have tangled with Iran have been brought low by the experience. Think poor old Jimmy Carter, destroyed by the hostage-takers at the US embassy in Tehran. Think Reagan, almost brought low by Irangate. Think Colonel Oliver North. Or envoy Robert McFarlane. Or Terry Waite. Or Barack Obama, for that matter, his Iranian policy torn up by Trump.

In theory, what Macron is trying to do, if Le Monde has got it right, is persuade Trump to allow Iran’s principal petroleum importers to continue buying oil from the Islamic Republic. This includes Turkey, China, Japan, India and South Korea. In return, Iran would itself return to the original nuclear agreement. That’s the message Macron sent back to Tehran with Iran’s foreign minister, who airbussed into Biarritz for his briefest of meetings with the French president.

But what Macron is really doing – which is what almost every EU leader is doing – is trying to preserve the peace of the Middle East long enough for the Americans to elect a serious, intelligent, boring and moderately honest political leader to replace the mentally unbalanced and very dangerous current holder of the highest office in the US.

Well, good luck to the Americans. For at present, they are confronting not the lunatic rogue state which Messers Bolton and Pompeo have nightmared up for Trump, but a nation governed by bravely defiant, ruthless, and – yes – devious men. For Iranians understand America far better than Americans will ever understand Iran.