Three news articles are enclosed. Of note is the early similarity of the September 12, 2016 Syria ceasefire deal to the Minsk-2 ceasefire of Feb 12, 2015 in eastern Ukraine, namely, early ceasefire violations by the U.S.-backed side. The difference in the two circumstances is that while Western media can ignore or lie about ongoing ceasefire violations in Ukraine, this is more difficult to do in Syria due to the heightened international interest and attention there.

Russia calls for details of the Syria ceasefire agreement to be made public, but U.S. resists. 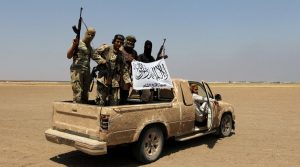 Russia says the U.S. is not keeping its end of the bargain on the Syrian ceasefire and has continued its calls for Washington to make public all documents relating to the deal. The Russian military says Damascus is the only party observing the agreement.

“On the third day of the ceasefire only the Syrian Army is observing it. Meanwhile, the U.S.-led ‘moderate rebels’ are intensifying the shelling of residential areas,” Russian Defense Ministry spokesman Igor Konashenkov said on Thursday.

The ministry said in a press briefing that “new conflict flashpoints are appearing” and that government forces and civilians had been shot at 45 times over the past 24 hours, without firing back.

The military added that the U.S. failed to deliver on its promise to separate truce-observing moderates and truce-violating terrorists and is now “apparently trying to use a smoke-screen to cover up the violations of their part of the deal.”

The ministry called on the Pentagon to hand over up-to-date and detailed information about the location of the various factions in the conflict.

“So far, all we have received from the Pentagon is a list of units under their protection. It does not specify the locations, the number of fighters, or the field commanders of those battalions.”

Earlier, the U.S. said that both Damascus and the rebels were reported as violating the ceasefire, which began on Monday. Washington acknowledges its responsibility to stop violations committed by the anti-government forces.

“We’ve always been clear, just as we have said that Russia’s responsibility is to exert influence or put pressure – however you want to put it – on the regime to abide by the cessation of hostilities, it is incumbent on us to persuade, convince the moderate opposition to also abide by the cessation of hostilities, and ultimately, that’s a decision they’re going to have to make,” U.S. State Department spokesman Mark Toner said Wednesday.

“We’re continuing our outreach to the Syrian moderate opposition – that’s been ongoing – and trying to explain the arrangement to them, answer their questions. And again, we’ve seen, as I said, sporadic reports of violence, but in large part we think [the ceasefire] is holding,” he added.

Amid the mounting differences of opinion between the U.S. and Russia over the truce, Moscow reiterated its call to declassify the entire deal negotiated in Geneva last week. The U.S. insisted that the documents were classified, which Russia initially agreed to, saying it would help protect the agreement from potential derailment. But after several officials in the U.S. voiced doubt about Russia’s sincerity in keeping to the deal, Moscow said it would seek to make the agreement public so that people could see for themselves what the deal was about.

Declassifying all relevant documents and endorsing them in a UN Security Council resolution would prevent speculation about the responsibilities of the parties involved, Russia believes.

“We know well how often documents get leaked to the media, and not by Russia but by our American colleagues,” Russian Foreign Ministry spokesperson Maria Zakharova said on Thursday. “Moscow suggests publishing [the documents] to avoid any erroneous interpretations, prevent an impact of such leaks on any party involved in the conflict or manipulation attempts by parties not familiar with details of the deal.”

Russia is not the only nation to take this stance. France said on Thursday it wants to see the exact wording of the deal.

“If there is confusion… then there is also a risk of the moderate opposition being hit,” French Foreign Minister Jean-Marc Ayrault said, as cited by Reuters. “At one point we’re going to be asked to support in greater detail this plan, so to do that we will need to have all the information.”

The U.S. and Russia signed a deal to curb the violence in Syria last week, with both sides hailing it as a major breakthrough. The ceasefire is meant to last for seven days. The UN said the truce managed to significantly reduce violence in Syria, but skepticism remains, as a similar attempt in February eventually collapsed.

Terrorist groups Al-Nusra Front and Islamic State (IS, formerly ISIS/ISIL) are not part of the deal and are legitimate targets for Russian and Syrian troops. Some reports have claimed that Damascus has attacked ‘moderate rebels’ while supposedly going after Al-Nusra. Moscow says the U.S. has failed to clearly distinguish Al-Nusra Front-allied groups from those which are meant to be protected by the ceasefire, despite Russia’s numerous requests to provide such intelligence.

A lack of progress in making the ceasefire comprehensive is hampering humanitarian relief, which is one of the key parts of the U.S.-Russian deal for Syria. On Thursday, UN Special Envoy to Syria Staffan de Mistura said Damascus would not give permission for aid convoys to travel to areas in need.

Moscow earlier stated that a humanitarian corridor to Aleppo could be opened once the rebels confirm their readiness to pull troops back from roads leading to the city. The Syrian Army is on standby to take a similar step.

The deal reached on Saturday, September 10 aims to put Syria’s peace process back on track. It includes a nationwide truce that started at sundown on Monday, improved humanitarian aid access and joint military targeting of banned Islamist groups.

Russian Foreign Minister Sergei Lavrov and U.S. Secretary of State John Kerry agreed on five documents, which they said would not be publicly released. However, on Thursday, France called on Washington to share details of the deal.

Churkin said Russia was working on a draft Security Council resolution that would endorse the deal. When asked if the deal would need to be annexed to such a resolution, he said: “We don’t know yet.”

“We’re working on it … I think we need to adopt it on the 21st (of September), this would make sense,” Churkin told reporters.

The 15-member Security Council is due to hold a high-level meeting on Syria next Wednesday during the annual gathering of world leaders at the United Nations. Kerry and Lavrov are expected to attend, diplomats said.

Syrian government forces and rebels had yet to withdraw from a road needed to deliver aid to the city of Aleppo on Thursday, threatening the Russia-U.S. peacemaking effort as the sides accused each other of violating a truce. [End article.]

By Patrick Wintour and Julian Borger, The Guardian, Sept 15, 2016

Russia accused the U.S. of covering up opposition violations in Syria on Thursday as the three-day old ceasefire came under increasing strain.

The Russian defence ministry said that Syrian regime forces had pulled back from the Castello road, a key access route into Aleppo, but that opposition groups had not withdrawn.

The Russian foreign ministry also complained of opposition shelling. “Only the Syrian army has been observing the ceasefire regime, while the U.S.-led ‘moderate opposition’ has been increasing the number of shellings of residential quarters,” the ministry statement said. “Moreover, it appears that the ‘verbal curtain’ of Washington is aimed at hiding the non-fulfilment of the U.S. obligations.”

The strained rhetoric came as the first UN aid convoy bound for besieged eastern Aleppo remained stuck in the absence of permits from Damascus.

The UN special envoy, Staffan de Mistura, said the Syrian government had not provided facilitation letters that had been agreed as part of the ceasefire deal, meaning that 40 trucks full of humanitarian supplies were halted at the Turkish border.

De Mistura, who said the hold-up was a clear breach of the ceasefire agreement, said the intended delivery of aid into eastern Aleppo, subject to a different permission regime, was also being blocked by hurdles put in place by the Syrian government and opposition fighters.

The delivery of aid is a precondition of the survival of a cessation of hostilities that came into effect on Monday and is designed to lead to unprecedented joint Russian-American action against terror groups inside Syria.

Hundreds of trucks were ready to be loaded, he said, and an opportunity to deliver aid and help solidify the ceasefire was being wasted. The UN has said it cannot cross front lines or checkpoints without Syrian permission.

The separate blockage over eastern Aleppo has left 20 UN trucks that travelled from Turkey into a buffer zone waiting for the past 48 hours for UN agreement that it is safe to travel along the Castello Road, the main supply route into the divided city, where 250,000 people are desperate for food and fuel.

Jan Egeland, head of the United Nations humanitarian taskforce for Syria, said the trucks were still in the buffer zone and “could go on a minute’s notice”. De Mistura said the aid could not move into Syria’s second city before the Castello Road route had been fully secured.

There have been reports that some opposition fighters are rejecting the delivery of the aid on the basis that it rejects the terms of the broader Russian-American agreement, including the plan to target fighters from the former al-Nusra front. The U.S. says al-Nusra is linked to al-Qaida and is a legitimate target alongside Islamic State. But other groups in eastern Aleppo are reluctant to abandon al-Nusra.

Under the ceasefire plan the Russian and Americans are supposed to create a joint centre to agree legitimate targets to attack by air. The Syrian air force would then in effect be grounded in those specified areas.

Despite the problems, De Mistura insisted the Russian-American agreement “is and remains a potential game-changer”. He said it was too much to describe it as a cessation of hostilities, saying instead it had produced a reduction of violence, adding that “by and large it is holding and is, in fact, substantial”.