As Democratic Elites Reunite With Neocons, the Party’s Voters Are Becoming Far More Militaristic and Pro-War Than Republicans 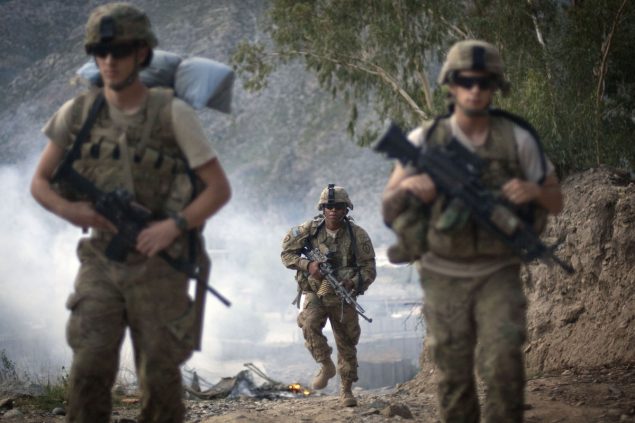 An important and timely article from earlier in the year by Glenn Greenwald that offers some in depth analysis when read in conjunction this one about Obama.

President Donald Trump’s December 18 announcement that he intends to withdraw all U.S. troops from Syria produced some isolated support in the anti-war wings of both parties, but largely provoked bipartisan outrage among Washington’s reflexively pro-war establishment.

That’s not surprising given that Americans by a similarly large plurality agree with the proposition that “the U.S. has been engaged in too many military conflicts in places such as Syria, Iraq, and Afghanistan for too long and should prioritize getting Americans out of harm’s way” far more than they agree with the pro-war view that “the U.S. needs to keep troops in places such as Syria, Iraq, and Afghanistan to help support our allies fight terrorism and maintain our foreign policy interests in the region.”

But what is remarkable about the new polling data on Syria is that the vast bulk of support for keeping troops there comes from Democratic Party voters, while Republicans and independents overwhelming favor their removal. The numbers are stark: Of people who voted for Clinton in 2016, only 26 percent support withdrawing troops from Syria, while 59 percent oppose it. Trump voters overwhelmingly support withdraw by 76 percent to 14 percent.

A similar gap is seen among those who voted Democrat in the 2018 midterm elections (28 percent support withdrawal while 54 percent oppose it), as opposed to the widespread support for withdrawal among 2018 GOP voters: 74 percent to 18 percent. 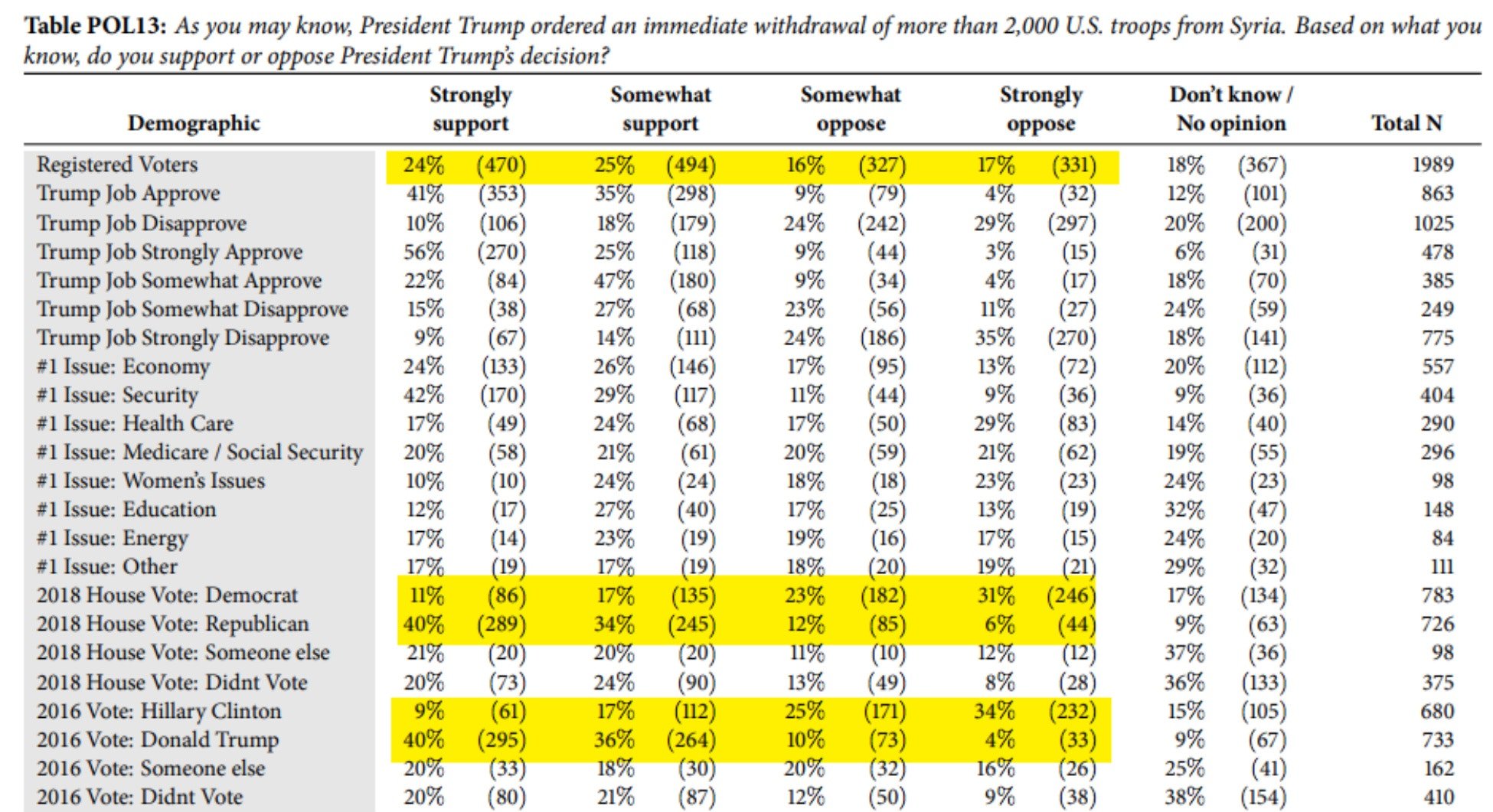 Identical trends can be seen on the question of Trump’s announced intention to withdraw half of the U.S. troops currently in Afghanistan, where Democrats are far more supportive of keeping troops there than Republicans and independents.

This case is even more stark since Obama ran in 2008 on a pledge to end the war in Afghanistan and bring all troops home. Throughout the Obama years, polling data consistently showed that huge majorities of Democrats favored a withdrawal of all troops from Afghanistan: 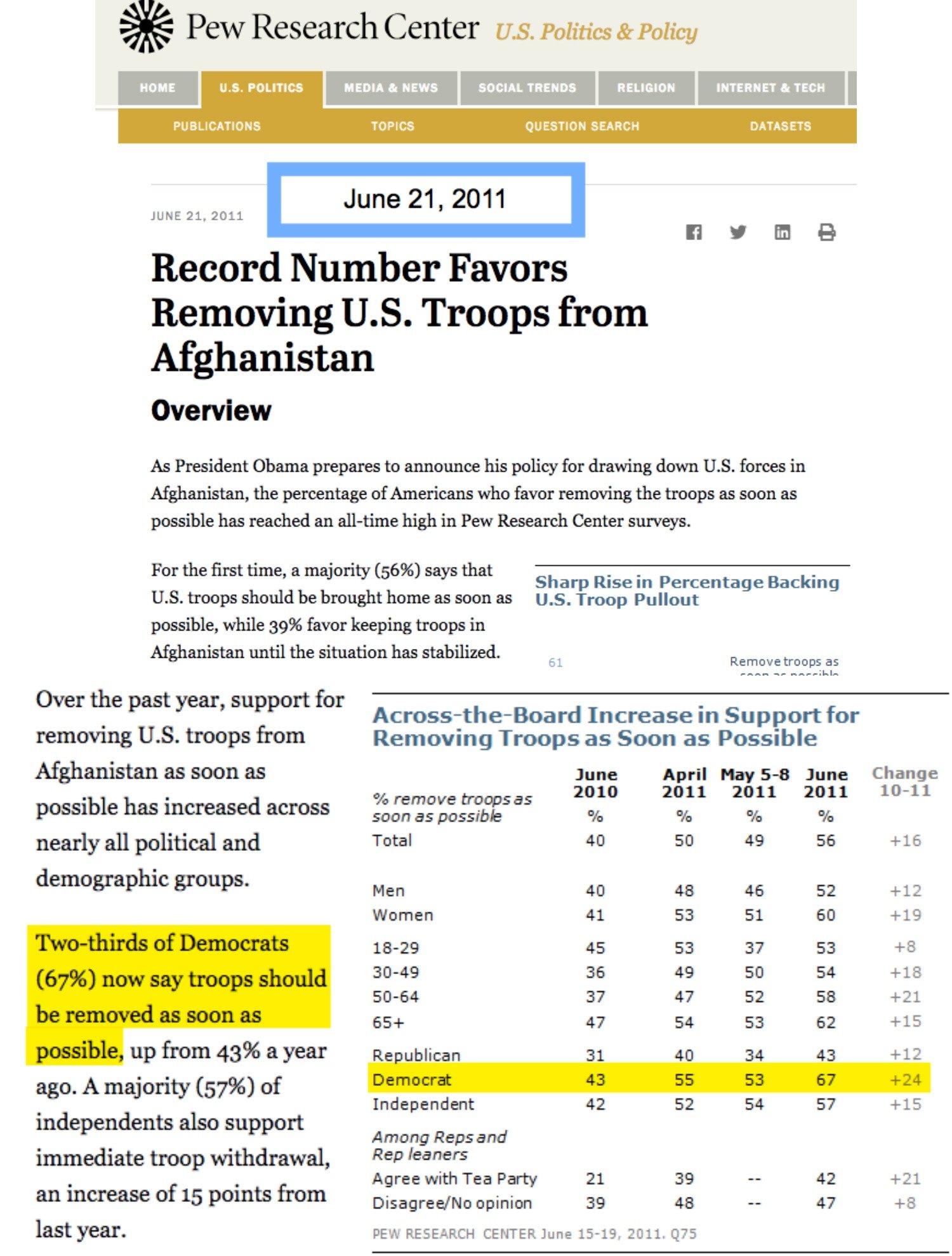 With Trump rather than Obama now advocating troop withdrawal from Afghanistan, all of this has changed. The new polling data shows far more support for troop withdrawal among Republicans and independents, while Democrats are now split or even opposed. Among 2016 Trump voters, there is massive support for withdrawal: 81 percent to 11 percent; Clinton voters, however, oppose the removal of troops from Afghanistan by a margin of 37 percent in favor and 47 percent opposed. 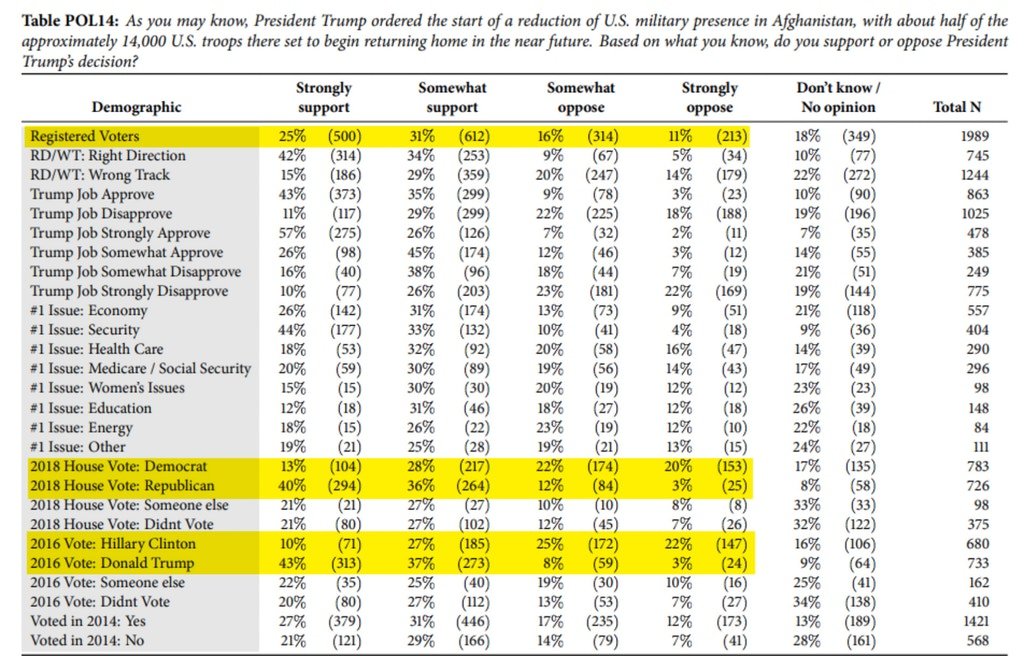 This latest poll is far from aberrational. As the Huffington Post’s Ariel Edwards-Levy documented early this week, separate polling shows a similar reversal by Democrats on questions of war and militarism in the Trump era.

While Democrats were more or less evenly divided early last year on whether the U.S. should continue to intervene in Syria, all that changed once Trump announced his intention to withdraw, which provoked a huge surge in Democratic support for remaining. “Those who voted for Democrat Clinton now said by a 42-point margin that the U.S. had a responsibility to do something about the fighting in Syria involving ISIS,” Edwards-Levy wrote, “while Trump voters said by a 16-point margin that the nation had no such responsibility.” (Similar trends can be seen among GOP voters, whose support for intervention in Syria has steadily declined as Trump has moved away from his posture of the last two years — escalating bombings in both Syria and Iraq and killing far more civilians, as he repeatedly vowed to do during the campaign — to his return to his other campaign pledge to remove troops from the region.)

This is, of course, not the first time that Democratic voters have wildly shifted their “beliefs” based on the party affiliation of the person occupying the Oval Office. The party’s base spent the Bush-Cheney years denouncing war on terror policies, such as assassinations, drones, and Guantánamo as moral atrocities and war crimes, only to suddenly support those policies once they became hallmarks of the Obama presidency.

But what’s happening here is far more insidious. A core ethos of the anti-Trump #Resistance has become militarism, jingoism, and neoconservatism. Trump is frequently attacked by Democrats using longstanding Cold War scripts wielded for decades against them by the far right: Trump is insufficiently belligerent with U.S. enemies; he’s willing to allow the Bad Countries to take over by bringing home U.S. soldiers; his efforts to establish less hostile relations with adversary countries is indicative of weakness or even treason.

At the same time, Democratic policy elites in Washington are once again formally aligning with neoconservatives, even to the point of creating joint foreign policy advocacy groups (a reunion that predated Trump). The leading Democratic Party think tank, the Center for American Progress, donated $200,000 to the neoconservative American Enterprise Instituteand has multilevel alliances with warmongering institutions. By far the most influential liberal media outlet, MSNBC, is stuffed full of former Bush-Cheney officials, security state operatives, and agents, while even the liberal stars are notably hawkish (a decade ago, long before she went as far down the pro-war and Cold Warrior rabbit hole that she now occupies, Rachel Maddow heralded herself as a “national security liberal” who was “all about counterterrorism”).

All of this has resulted in a new generation of Democrats, politically engaged for the first time as a result of fears over Trump, being inculcated with values of militarism and imperialism, trained to view once-discredited, war-loving neocons such as Bill Kristol, Max Boot, and David Frum, and former CIA and FBI leaders as noble experts and trusted voices of conscience. It’s inevitable that all of these trends would produce a party that is increasingly pro-war and militaristic, and polling data now leaves little doubt that this transformation — which will endure long after Trump is gone — is well under way.