As Colston’s statue lies forlorn in a lock-up, Bristol is working out what its toppling means 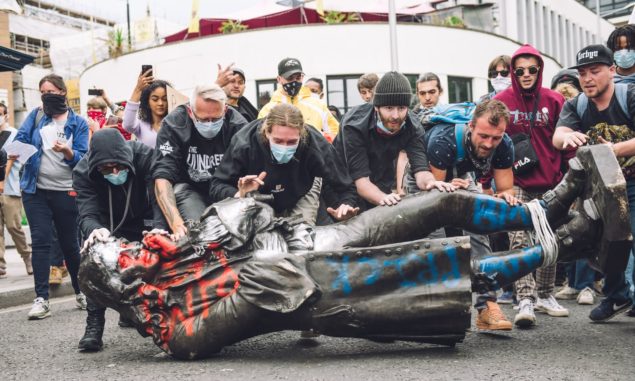 At the beginning of last month the now infamous statue of the 17th-century slave trader Edward Colston loomed over the centre of Bristol, as it had for 125 years. Today Colston lies flat on his back across a bed of wooden pallets on the concrete floor of a council lock-up.

At the beginning of last month the now infamous statue of the 17th-century slave trader Edward Colston loomed over the centre of Bristol, as it had for 125 years. Today Colston lies flat on his back across a bed of wooden pallets on the concrete floor of a council lock-up.

His fall to earth, and his rough journey across the asphalt to Bristol harbour, into which he was thrown, have left their marks. Colston is now covered in scrapes and scratches. There’s a hole in his left buttock and his walking stick is missing. The Black Lives Matter protesters who toppled Colston also spray-painted his hands and face bright red, signifying the blood of his victims.

In the city that gave the world Banksy, anti-racism protest comes with a bit of street art thrown in. One of Bristol’s less subtle spray-paint artists added another flourish – the word “Prick” sprayed in large blue letters down Colston’s long coat. Not exactly cutting-edge political commentary but, given the nature of Colston’s crimes, that probably counts as getting off lightly.

Scars are said to make the people who bear them appear more interesting. They seem to have a similar effect on statues. Beaten-up, bloodied and graffitied, Colston’s statue is no longer just another piece of mediocre, late-Victorian public art. As is the case with the hundreds of segments of the Berlin Wall, which today stand in museums across the world, the graffiti Colston has acquired is as historically significant as the object on to which it was scrawled.

Under the flickering fluorescent lights of the lock-up lies an object that has not only changed in appearance but undergone a fundamental transformation in its meaning. In its new state, the statue is no longer capable of performing the function for which it was created. It is not now a memorial to a slave trader but a potent relic from the age when our society believed it was acceptable to memorialise a slave trader. An age that, for many people, came to a crashing end five weeks ago in Bristol.

If future historians are ever asked to find a single object to represent the tumultuous summer of 2020, Colston, with his battle scars and Warholesque graffiti, will be a prime contender.

At the beginning of last month, I would have put the chances of Colston’s statue being removed from public display, any time soon, at about zero. I had even given up hope that a plaque cataloguing his crime, and more importantly remembering his thousands of victims, would ever be attached to the pedestal. The last attempt to force even that meagre concession from the guardians of Colston’s toxic reputation was rebuffed at the end of 2019. They had won. We had lost. Then came 2020.

In all sorts of wonderful and terrible ways, 2020 has been a year of impossibilities made possible. That we are only half way through the year is both exhilarating and terrifying. A new disease forced us to confront society’s oldest maladies – inequality and racism. In the midst of this newfound clarity, yet another murder of yet another African American, yet again by the police, had an impact previous police killings had not. In the age of Covid the murder of George Floyd shifted the Overton window, the range of ideas tolerated in public discourse, shifted possibilities. A storm that began in America crossed the Atlantic and made landfall in Bristol, at the base of a statue to a man who died 299 years ago.

What followed the toppling of Colston was a purge, an act of civic purification. Institution after institution was suddenly able to see the cult of Colston for what it is – a stain on Bristol’s reputation and a standing insult to both the enslaved and their ancestors.

The de-Colstonification of Bristol was rapid. The concert hall had already made the decision to rename but days after the toppling the word “Colston” was removed from its facade. The same happened with Colston Tower, an unlovely office block just metres from the now empty plinth. Around 20 institutions and businesses have made clear their intention to drop Colston’s name. Bristol Cathedral did what until recently had seemed impossible: it covered up the sections of its stained-glass windows that memorialise the slave trader.

But here is the problem. Any sense of relief and euphoria at this flurry of decontamination is tempered by the knowledge that there are thousands of people in my adopted home city who feel very differently about all of this. The only time as a writer I have ever been confronted on the street and shouted at by someone furious at my views and how I expressed them was in Bristol and in response to an article about Edward Colston in this newspaper.

Colston’s statue and the names of streets, schools and a concert hall were merely the most visible aspects of a cult that is nourished by a calendar of ceremonies and sustained by literarily centuries of propaganda. For generations, children in Bristol were told that a man who traded in flesh was a saint. That a member of the elite, born into a rich merchant family, and who went to London to become slave trader to the king, somehow represents ordinary Bristolians.

At ceremonies on “Colston Day” these fabrications were fed to children along with “Colston buns” – bread sweetened with spices and sugar. Colston’s defenders were either blind or indifferent to the irony – sugar was the commodity that his victims were beaten, whipped and enslaved to produce.

This is what we are up against. Yet the onus is on those of us who support the de-Colstonification of Bristol to reach out to our fellow citizens who were disturbed by the toppling of the statue. Our task is to listen but also to attempt to persuade those willing to listen that Colston was not who his defenders said he was and that the confronting of difficult historical facts is not an attack on their history or their identity.

•David Olusoga is a historian and broadcaster