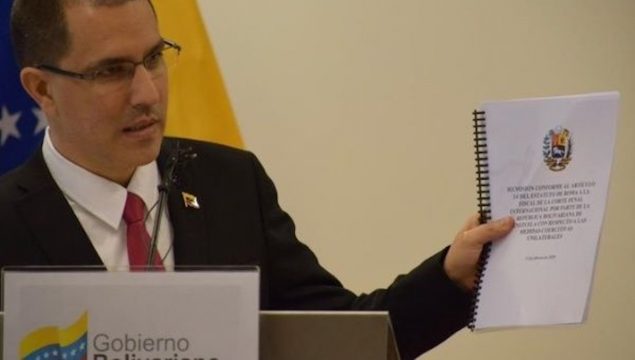 The United States is formally accused by Venezuela of crimes against humanity at the International Criminal Court.

Venezuela’s Foreign Minister Jorge Arreaza arrived in The Hague (Netherlands) on Thursday to file a complaint with the International Criminal Court (ICC) against the United States and its sanctions.

During his meeting with the Court, Arreaza exposed the crimes against humanity perpetrated by the U.S. government in its failed attempt to overthrow Venezuela’s President Nicolas Maduro.

As a consequence, the Venezuelan people’s rights to health, food, and development have been systematically violated.

“We have the right, the obligation, and the responsibility to protect our people,” Arreaza said at a press conference held after handing over the documentation of the case to the Hague court.

“The consequences of U.S. coercive unilateral measures are crimes against humanity and violate both international laws and the United Nations Charter.”

On instructions from President Nicolas Maduro, Foreign Minister Jorge Arreaza arrives in The Hague and introduces a complaint to the International Criminal Court for crimes against humanity committed by the US government against the people of Venezuela. Justice against the blockade.”

During his presentation, the Venezuelan Foreign Minister also stressed that the U.S. unilateral coercive measures are “weapons of mass destruction” that affect various peoples of the world.​​​​​​​

Therefore, the action that the Venezuelan government is taking before the Criminal Court will set a precedent for international law and multilateral institutions.

The most recent U.S. sanction was directed against Conviasa airlines, a public company that carries out non-profit operations for public programs such as “Return to the Homeland” and Mission Miracle.​​​​​​​