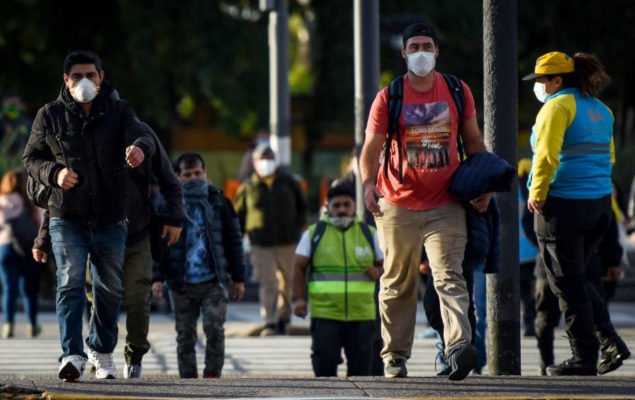 Long dismissed as a financial basket case, Argentina shows how much is possible when a government puts people before profits.

The cheers in Buenos Aires began at 9 pm toward the middle of March, around the time the novel coronavirus brought much of the world to an abrupt and unsettling halt. Like the residents of New York, Madrid, and countless other cities sheltering in place, quarantined “porteños” have appeared at their windows and balconies nightly to applaud those on the front lines of the pandemic.

By month’s end, however, a separate sound had begun echoing half an hour later across the wealthier Buenos Aires neighborhoods of Recoleta and Palermo. If not louder than its predecessor, the tone was far more caustic, with participants whistling, blowing plastic horns, and banging pots and pans. Its ostensible aim was to pressure state functionaries to accept a pay cut, but as is so often the case with Argentina’s “cacerolazos,” this protest was distinctly anti-political in nature.

In December of 2019, the Peronist-progressive coalition party Frente de Todos (Everyone’s Front) swept into power after four years of neoliberal mismanagement. Now that it had begun enacting a social democratic agenda, against the backdrop of an unprecedented public health crisis, the forces of reaction were making their voices heard. Indeed, their demonstration began shortly after Minister of Labor Claudio Moroni ordered the country’s largest steel manufacturer, Techint, to pause the firing of 1,450 temporary workers. (President Alberto Fernández has since issued an emergency decree banning layoffs for a period of two months.) “Muchachos, les tocó la hora de ganar menos,” Fernández told the country’s business leaders at the time. “Boys, it’s time for you to earn less.”

Herein lies the challenge not just for Argentina but also for countless other liberal democracies across the West. While the outlines of our global crisis are only beginning to emerge, it is clear that Covid-19 demands that these nations reimagine the role of the state after decades of free-market hegemony. New possibilities have presented themselves that seemed unimaginable as recently as February. Even the editorial board of the Financial Times recently conceded that more radical reforms like a wealth tax and a universal basic income will have to be put on the table. Fernández, whose conservative predecessor, Mauricio Macri, reduced the Minister of Health to a non-cabinet position, understands this intuitively, implementing a pandemic response that, if not offering an exemplar for the Americas, stands in stark contrast to the region’s more overtly authoritarian regimes.

“I was concerned that the Argentine state apparatus wouldn’t be up to the task, but the response [has been] good,” says Marcelo Leiras, a political scientist and adviser to Argentina’s minister of the interior, Eduardo “Wado” de Pedro. “The Minister of Health [Ginés González García], at the beginning, thought that this epidemic would not strongly effect Argentina. For good reasons, I think. We didn’t know how contagious this thing was. The president was wise enough to widen his circle of advisers and heed the most prudent, conservative advice. He was [also] bold in choosing a strong quarantine policy, which in economic terms was incredibly risky.”

“We have to keep in mind how inarticulate the international response has been to the [coronavirus],” he adds. “It’s reflective of the political disarray of the West in domestic and international terms. I think the president sensed that and reacted very quickly and consistently.”

Whereas US President Donald Trump and Brazilian President Jair Bolsonaro have abdicated responsibility for their nations’ pandemic responses, with each openly flouting epidemiologists and sniping at the governors of their respective states and provinces, Fernández declared a nationwide shelter-in-place order on March 19. It was enacted the following day. By then, Argentina had only 128 official cases nationwide, according to data from Johns Hopkins University. As with the Argentinian president’s prior decisions to close the country’s borders and place visitors from global hot spots in a two-week quarantine, the aim was simple: to flatten the curve before a swell in cases could overwhelm the country’s latticework of trade union clinics, public hospitals, and private health care providers. It is far too early to call the measures a success, but early returns suggest that they are working. Infections have come in well below initial projections, and as of April 12, Argentina’s death rate stood at two per 1 million habitants. Chile’s, by contrast, was four, and Brazil’s was five. The United States’ was 62.

“Argentina has acted very quickly in comparison with other countries,” says Rodrigo Quiroga, a bioinformatician at Argentina’s National Scientific and Technical Research Council. “[That includes] the rapid closure of the border, the mandatory isolation of those who came from countries with high rates of infections and the closing of schools. These measures, along with the quarantine, have reduced the number of cases in this first stage of the pandemic.”

Fernández’s economic actions have been no less audacious, especially when considering that his administration inherited a $311 billion debt that includes a record $57 billion loan in 2018 from the International Monetary Fund—the institution that imposed punishing austerity measures after the country’s crash in 2002. Argentina has invested as much as 2 percent of its gross domestic product in an economic and social relief package—among the highest within the G20—while an executive order issued last month has ensured that no essential services be cut for retirees, social welfare recipients and households earning less than a combined 33,750 pesos (about $520) due to a lack of payment. These services include electricity, gas, water, mobile, and fixed landlines, as well as Internet and cable television. The Fernández administration has also suspended evictions and frozen all rent hikes through September, in addition to absolving “monotributistas,” the country’s bottom tax bracket, of penalties for failing to make their March tax payments. 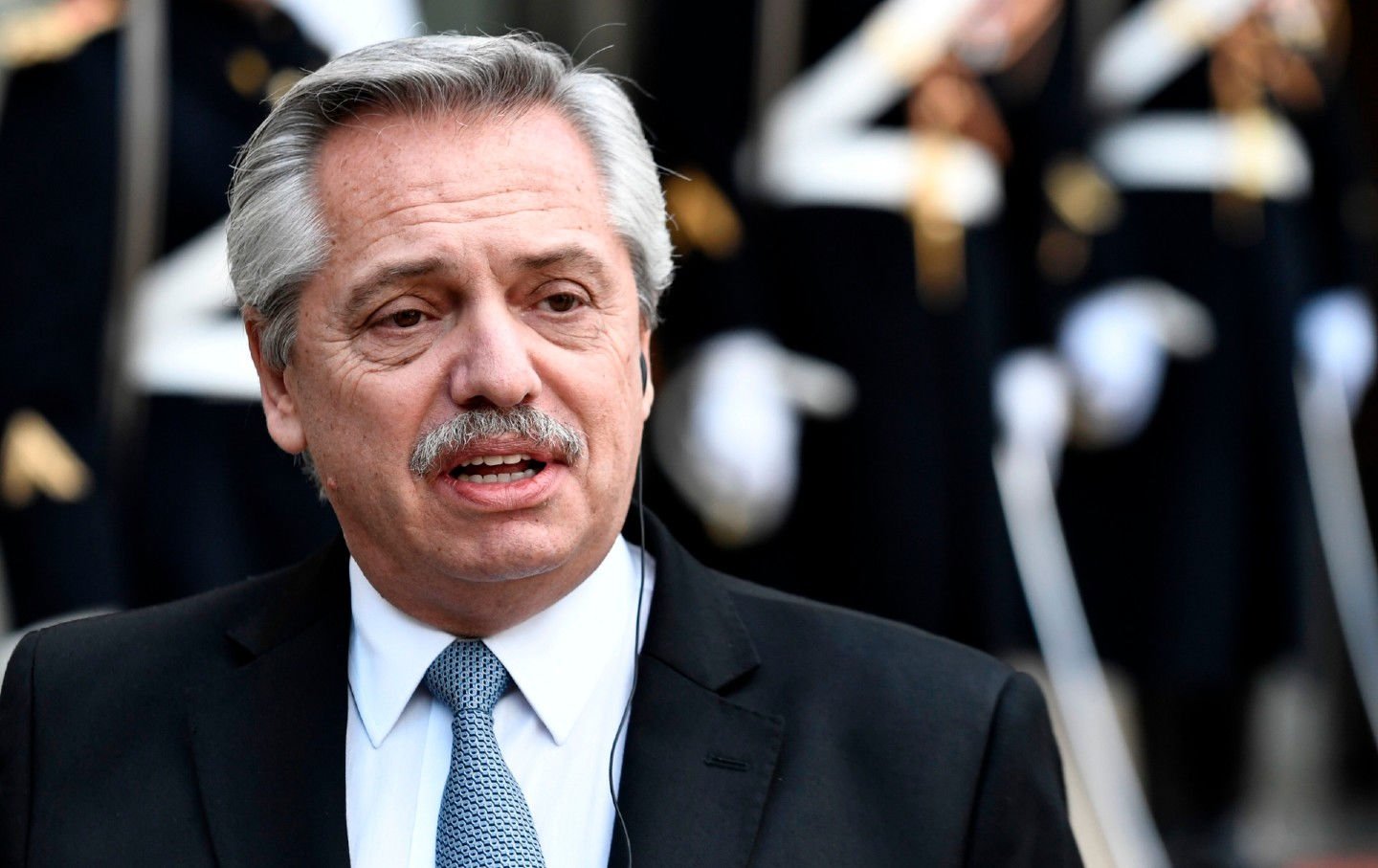 More significantly, the president has created via executive order a 10,000-peso (about $150) Ingreso Familiar de Emergencia (Emergency Family Income) for domestic workers and other low-income earners, giving first priority to those who qualify for Asignación Universal por Hijo (Universal Child Allowance) and Asignación para Embarazadas (Allowance for Pregnant Women). Nearly 8 million Argentines will receive subsidies beginning April 21. The administration has further made every employer, regardless of trade and size, eligible for a Programa de Asistencia de Emergencia al Trabajao y la Producción (Emergency Assistance Program for Work and Production), postponing or reducing the tax commitments of small businesses by up to 95 percent and paying out between 50 and 100 percent of a monthly minimum wage salary for each of their employees. Meanwhile, the federal government has compelled banks to extend hundreds of millions of dollars in loans at a reduced interest rate in an effort to keep the economy afloat.

Although Argentina has declined to nationalize its private hospitals as Spain has done, it has secured their cooperation during the crisis so that its health care system doesn’t face a shortage of hospital beds. Fernández has likewise activated the armed services to build a number of triage centers in the event of a surge in cases. Taken together, these actions amount to a mass mobilization of the Argentinian state.

This is not to suggest that the country’s pandemic response has been entirely free of setbacks. Earlier this month, Fernández came under fire when thousands of retirees were forced to wait in lines for as long as 12 hours—and in some cases overnight—to collect their payments. The president moved immediately to coordinate the opening of bank branches on weekends, blaming the secretary general of the Asociación Bancaria (Banking Association), Sergio Palazzo, and the executive director of the Administración Nacional de la Seguridad Social (National Social Security Administration), Alejandro Vanoli, for placing the country’s most vulnerable at risk.

“Argentina is closer to Italy and Spain in its number of hospital beds, doctors, and medical supplies than it is to its neighboring countries,” says María Esperanza Casullo, a political scientist and the author of Por Qué Funciona El Populismo? (“Why Does Populism Work?) “With that said, state resources are scarce, or scarcer than would be necessary, and the government won’t be able to extend the quarantine too long because the economy would not sustain it, especially the percentage of the Argentinian population that works outside of the market. The country’s gross domestic product has fallen for four consecutive years, so it’s going to be difficult.”

Fernández has investigated relaxing quarantine restrictions in order to stimulate the economy, but the challenges will be immense. While the government maintains that its testing of Covid-19 is proportionate to the country’s low rate of infection (2,142 official cases as of April 12), it had administered just 19,758 tests—437 per million habitants—two weeks before quarantine was tentatively set to end April 26. As the country attempts to ramp up the numbers of ventilators and test kits after years of funding cuts to the Administración Nacional de Laboratorios e Institutos de Salud “Dr. Carlos Malbrán” (the Malbrán Institute), and amid supply chain disruptions that have hampered much of Latin America, it may be all but impossible to control the virus’s spread in the more impoverished suburbs of Buenos Aires, where population density is high, access to quality health care is limited, and few enjoy the luxury to self-isolate. At the same time, a 2019 poll from Argentina’s Catholic University finds that nearly half of the country’s labor force (49.3 percent) works off the books, with 81.7 percent of that segment in low-quality jobs.

“The response has ultimately been reflective of the strengths and weaknesses of the Argentinian state,” says Leiras. “The Argentinian state is strong in dialogue and politics but bad in terms of infrastructure, in its ability to go to places and do things, to reach people with health services [for example]. In that respect, it’s like an octopus with very short tentacles.”

Yet, despite its deficiencies, Argentina has thus far managed to avoid the kinds of catastrophes emerging in countries like Ecuador, where bodies have piled up in the streets of Guayaquil, and Brazil, whose president now faces impeachment calls for his homicidal denialism. More recently, Fernández has encouraged the congress to pass a tax on the country’s biggest fortunes—a response to his political opposition’s calls for government officials to reduce their salaries by 30 percent. The tax, which targets, among others, those who were granted immunity by the prior administration for hiding their wealth overseas, signals the president’s desire to fundamentally reorder Argentinian society as much as it aims to ameliorate the worst economic effects of the crisis. Fernández grasps what many of his counterparts on the world stage have not: that our fates are intrinsically bound together, and that the historical epoch we’ve been thrust into demands a new social contract.

“For many years, Argentinians have been led to believe that politicians and union leaders were the source of all their problems,” the president mused in late March. “The real problem is those who believe that there are too many people, that this [isn’t] a country where we all have a place…. After the pandemic, everything will be different. We’ll live in another world. I believe that ours is a time of reflection, in which we can recover something that postmodernity has robbed of us.”

“Postmodernity has led us to believe that individualism was the secret and that success meant earning money,” he continued. “[We’ve seen] a microscopic bug lay waste to vast fortunes and destroy accumulated wealth. Microscopic. This same bug can kill [the rich] as easily as it can kill any one of us. What was the purpose then of accumulating so much?”

This piece has been updated to reflect when Argentina’s shelter-in-place order was enacted.
*****
Jacob Sugarman is the former managing editor of Truthdig. His writing has appeared in Salon, AlterNet and Tablet, among other publications.
Editors’ Note: While we don’t necessarily share the views we publish on New Cold War, we do attempt to provide readers with a range of views. This is because your right to make your own mind up depends on your being fully informed.
Share
Tweet
Share
Pin