One of the world’s leading scholars on the development of agriculture in the Soviet Union during its early years is Mark Tauger. He is an associate professor of history at West Virginia University. He is the author of the 2010 book Agriculture in World History. His writings on Soviet agriculture— articles, book chapters, and reviews–are listed on his website at West Virginia University. The list is enclosed below. 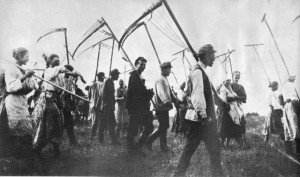 Professor Tauger’s writings challenge several interpretations of the famines which struck regions of the Soviet Union during the first 15 years or so of the country’s existence in the 1920s and 1930s, including in Ukraine. He argues that the periodic food shortages which marked those years were a result of a complex of primarily natural factors that waxed and waned, causing severe reductions in agricultural production. Factors included periodic drought conditions and persistence of crop pests and diseases when the means to combat them were still underdeveloped.

The most common and aggressively argued of the interpretations of the several famines which struck post-1918, independent Soviet Ukraine in the late 1920s and early 1930s is that of ‘Holodomor’—the claim that famines were the result of deliberate policies by the leadership of the Soviet Union under Joseph Stalin to weaken and destroy the political and economic independence of Soviet Ukraine, including by killing large numbers of its citizenry through deliberate starvation. The proponents of ‘Holodomor’ posit a genocide equivalent in numbers to the Holocaust of World War Two. Tauger argues sharply against this thesis.

Much scholarly literature sees the 1920s-1930s as a period in which peasant farming had no problems when left alone and allowed to operate in a capitalist setting. The only problems, it is argued, occurred when the Soviet government intervened with policies that exploited the peasants. Professor Tauger documents the series of natural disasters that devastated harvests repeatedly in the 1920s and 1930s. He argues that Soviet policies were not aimed to exploit the peasants but to overcome natural disasters by emulating American large-scale industrialized farming methods in their own Soviet way.

Among the writings of Mark Tauger which summarize his overall research and writing are the following four. The first three are attached as pdf files :

Mark Tauger is preparing a book to be published later in 2015 on the history of famines in Russia and the USSR. Among the subjects to be examined are the repercussions of the environmental causes of the Soviet famines of 1931-33. One of the key scientists to discover these causes was a plant breeder who went on to breed important new high-yielding grain varieties that created a kind of Soviet green revolution.

Writings on Soviet famines and agriculture, by Mark Tauger

(From the page of Associate Professor Mark Tauger at the University of Virginia, here. See the web page for explanatory notes on how to obtain the listed items not immediately available).