April update: a month of fire in Ukraine 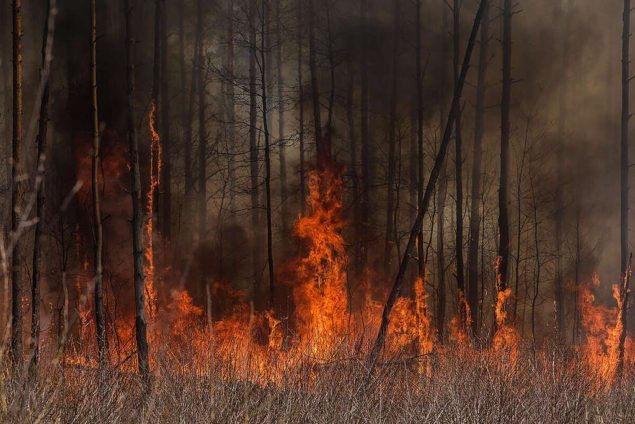 Written exclusively for the New Cold War website, this month our regular contributor Dmitriy Kovalevich describes how, in the middle of the COVID-19 crisis, wildfires burn in the contaminated Chernobyl region of Ukraine and other incendiary events plague the country.

April in Ukraine is traditionally a month for commemorating the Chernobyl tragedy of 1986. However, this year, in the middle of the Covid-19 pandemic, Ukraine faces another problem – an immense and persistent wildfire in the same place.

Abnormally dry and windy weather has resulted in massive wildfires all over Ukraine, but the area most affected has been the Chernobyl zone. The area around the nuclear plant is largely abandoned but the forests have not been cleared of fallen trees and this created ideal conditions for wildfires to spread. The fire could even be seen from space, as NASA pictures show[1].

Research suggests that fires in heavily contaminated areas can resuspend radioactive elements in the plumes of smoke and that these can travel over long distances [2]. 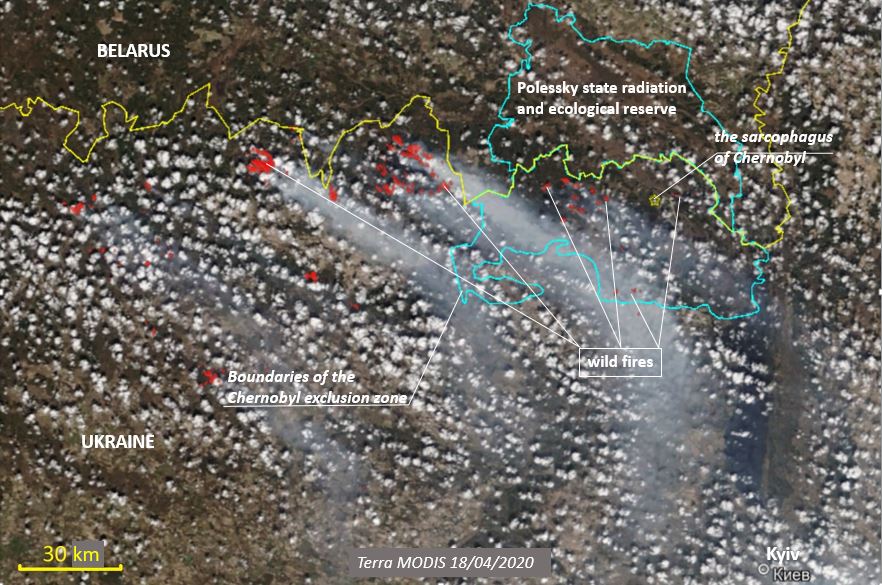 The wildfires have destroyed dozens of villages and a depot containing radioactive contaminated vehicles. The blaze almost reached the nuclear plant. Some 400 firefighters, mobilized from the entire Kiev region, courageously attempted to extinguish it without success.

Although the flames subsided when it rained on April 18, the wildfire started again a few days later on April 23, when the flames spread to the neighbouring Zhytomir region. Hundreds of people were left homeless but thankfully there were no reports of human casualties.

The firefighters put this down to the fires being in areas of boggy peatland; the main fire is underground and reignites spontaneously after appearing to be extinguished.

An investigation into the causes of the wildfires has also revealed that one of the Kiev region thermoelectrical power stations used to burn wood contaminated with radioactivity from the Chernobyl forests [3].

The air tastes sour and it is difficult to breathe

According to the Air Quality Index, smoke and ash from the Chernobyl fire has resulted in the city of Kiev having the highest air pollution in the world.[4] The air tastes sour and it is difficult to breathe there. The smoke not only affected Kiev but most regions of Ukraine, which are also affected by other wildfires.

It is not possible for Ukraine’s firefighters to be present at every fire at the same time. Furthermore, neoliberal reforms and spending cuts have reduced the overall number of firefighters. The situation is similar to that of the coronavirus pandemic; for both of these disasters there are insufficient personnel; neither enough to treat the thousands of patients, nor to extinguish the numerous wildfires.

The country’s firefighters are having to work both day and night, sleeping where they fall from sheer exhaustion. They have not been provided with gear to protect them from radioactivity and are actually risking their health and even their lives by working in the contamination zones. The firefighters claim that they are not even being officially supplied with food, as they are unable to leave the burning forests. To add to the shameful situation, the only food the firefighters receive is prepared and brought to them by civilian volunteers.[5] 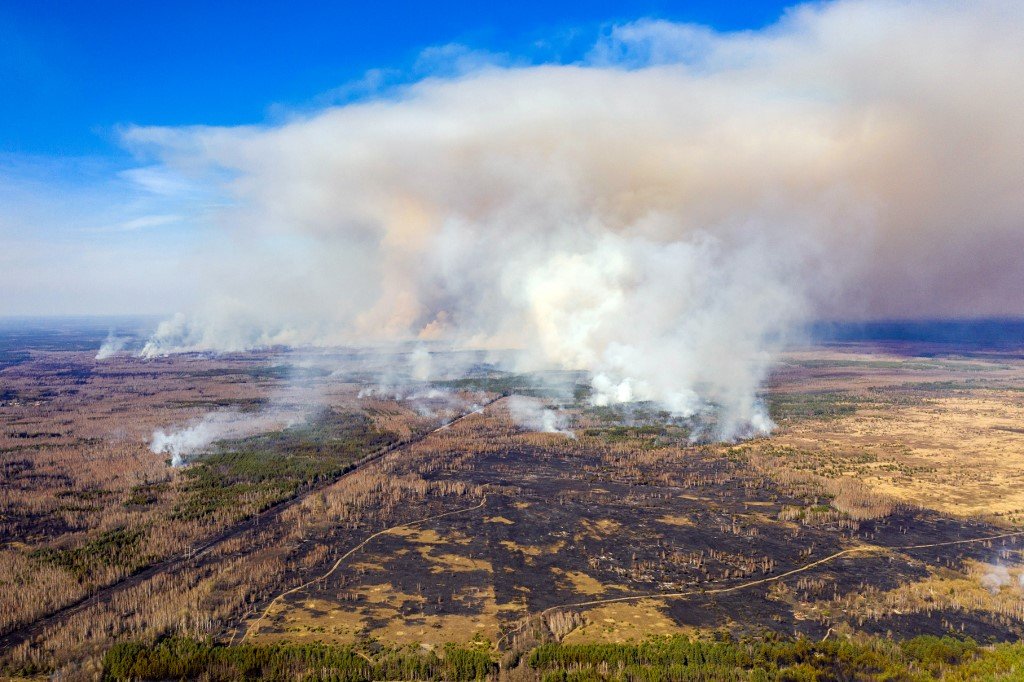 This aerial picture taken on April 12, 2020 shows a forest fire burning at a 30-kilometer (19-mile) Chernobyl exclusion zone in Ukraine, not far from the nuclear power plant. (Photo by Volodymyr Shuvayev / AFP)

Mikhail Popkov, former head of the Ukrainian Scientific and Information Centre for Forest Management, has claimed that radionuclides from the burnt wood are dispersing throughout the Kiev region. “This is a radioactive fire,” he said. “All the radiation that was accumulated in the Chernobyl forests, and this is cesium and strontium, which are active radionuclides, is now rising into the air and being spread by the wind over the entire Kiev region.”[6]

Ukraine journalist, Andriy Manchuk, wrote that the wildfire reveals the collapse of the forestry, which has been exposed to budget cuts as part of the neoliberal reforms:

The collapse of the forestry, on which officials constantly save money, has led to the fact that forests are literally littered with fallen wood that was not cleared in time, which immediately intensifies the fire. There are too few foresters; they don’t have enough equipment – and therefore the forests are not separated by fire paths; forest roads are abandoned and fire engines simply can’t drive up to the burning copses. Moreover, the number of fire engines is small, there is a lack of aviation, and among the firefighters there is a shortage of personnel due to their small salaries. And as a result, we see how the Chernobyl firefighters are literally overworked, falling asleep after work directly on the cold ground. All this contributes to the further development of the biggest fire of recent years, which coincided with the onset of the Covid epidemic.”[7]

Profiting from the Chernobyl “brand”

Kiev authorities have traditionally asked for financial aid from the EU and international financial institutions but even so, aid provided does not reach those who actually fight the fires.

Every government of independent Ukraine, to one degree or another, has tried to profit from the Chernobyl “brand” by asking for money from Western governments for some kind of project. As the Ukrainian journalist Olga Matsko noted8, for the entire 30 years the country’s state policy towards the Chernobyl zone can be summarized as “we suffered for nothing, give us money.”

Despite wildfires in the Chernobyl zone happening frequently they have never reached the current scale. Ukrainian ecologists have linked previous wildfires with deliberate arson, due to illegal logging[8]. It is strictly forbidden to salvage radiation-contaminated timber, but this happens, nevertheless. And wildfire is an ideal way to conceal it. 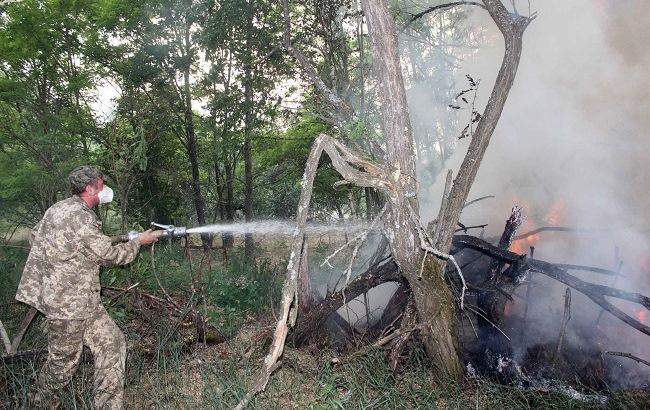 Photo: kyivobl.dsns.gov.ua. Ecologists assure: this is a planned arson.

Some of the illegally logged wood from the Chernobyl zone has been exported. Ukrainian political scientist Yanina Sokolovskaya, warned of this in 201810:

We see that wood is being exported from the Chernobyl zone – this is a dangerous and the contaminated wood that was first used for the needs of Ukraine, now goes to Europe. When Europe understands this, it will cease to talk to Ukraine at all.”

Ukraine exports more illegal lumber to the EU than any other country – more than Latin America, Africa and South East Asia combined, according to an investigative reportby the British ecological organization, Earthsight.11

‘Blaming Russians’ was a lie

During the quarantine measures and wildfires, a series of arson attacks were made on churches and monasteries of the Ukrainian Orthodox Church (UOC). For years Ukrainian authorities have attacked this church (calling it ‘pro-Russian’), promoting instead the newly established Orthodox Church of Ukraine supported by US State Department head Mike Pompeo. On April 23, a monastery near Odessa was attacked with Molotov cocktails simultaneously from three locations. A fire broke out and burnt down several of the monastery buildings, injuring some monks.12The fire is the fourth arson attack against UOC churches and monasteries in the past two weeks. There have also been arson attacks against churches in the Chernivtsi, Rivne and Sumy regions. 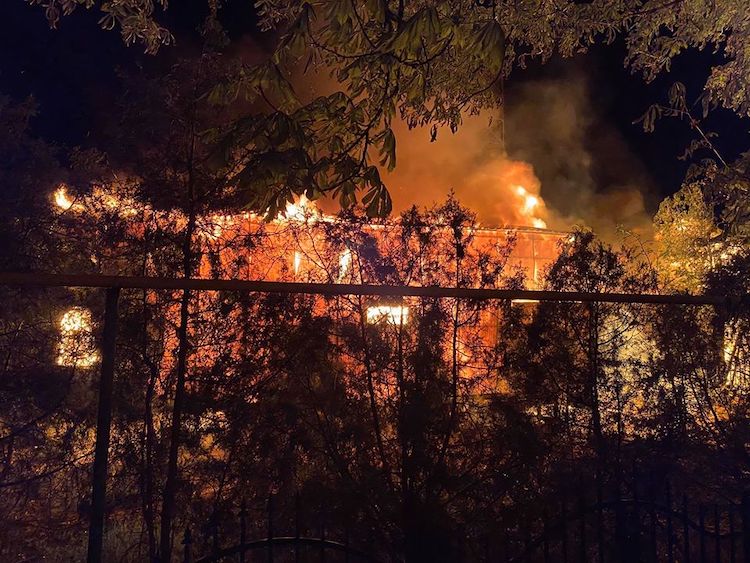 In late April Ukraine’s Investigation Commission published the results of an investigation into a large fire that took place in 2017, at the biggest ammunition depot in Balakleya. Previously, Ukrainian media and officials blamed a ‘Russian drone’[9]which allegedly attacked the ammunition depot and this version was willingly seized on by the western media.[10]And only after three years of investigation Kiev authorities recognized that the fire occurred due to the detonation of explosive devices buried in the ground by subversives.[11]In total, some 760 kg of explosives were used to blow up the ammunition depot. In other words, ‘blaming Russians’ was a lie.

It should be noted that fires at ammunition depots happen regularly all over Ukraine. A plausible explanation for this is an attempt to cover illegal arms trading, and the results of the Balakleya fire investigation show this version to be correct.

For Ukraine, April has been a month of fire. The country is quite literally burning, due to illegal logging and illegal arms trading; corruption, neoliberal reforms and far-right militants. Since the Covid-19 quarantine measures have severely affected the country’s economy, this summer promises to be a hot one.