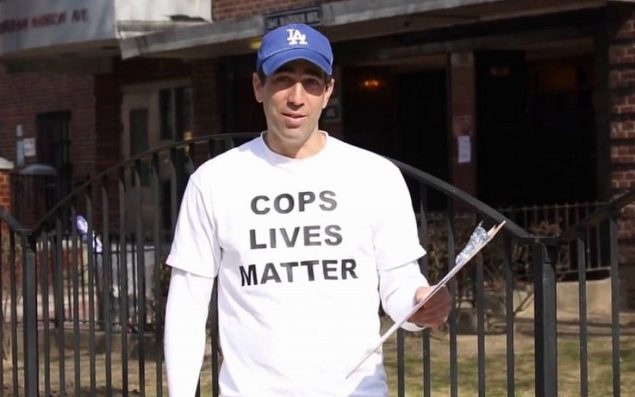 Why would Anti-Racist Canada (ARC) promote a video by a FOX News filmmaker who compares the Left to the KKK and claimed Swedish police refuse to go into immigrant neighbourhoods? Is it because the ARC collective is an example of people who fight racism except if it is anti-Palestinian?

Why would Anti-Racist Canada (ARC) promote a video by a FOX News filmmaker who compares the Left to the KKK and claimed Swedish police refuse to go into immigrant neighbourhoods? Is it because the ARC collective is an example of people who fight racism except if it is anti-Palestinian?

Recently, ARC retweeted long-time anti-Palestinian activist Bernie Farber noting: “If anyone wants to read how anti-Israel invective morphs into antisemitism, then read this frightening piece. This happened this week at Duke.” Farber linked to a Jewish Journal article about a University of North Carolina/Duke University conference on the “Conflict over Gaza: people, politics and opportunities”.

The primary claim leveled against the conference is what rapper Tamer Nafar said at a concert the night before two days of talks by prominent professors, including a number who are Jewish. “This is my anti-Semitic song”, Nafar told the crowd. “Don’t think of Rihanna when you sing this, don’t think of Beyonce — think of Mel Gibson. … Let’s try it together because I need your help. I cannot be anti-Semitic alone.”

Responding to the slander campaign, conference attendee Lara Friedman wrote: “His satirical song ‘Mom, I fell in love with a Jew,’ jokingly introduced Tamer Nafar, a well-known rapper and actor (and a Palestinian citizen of Israel), as an ‘anti-Semitic’ song. His statements indeed sounded to many people, including me, politically deaf or even painful. But to put it bluntly: The song is not anti-Semitic and has not even been controversial so far. The video became popular in Israel two years ago when it was released. The Israelis correctly understood the song as a cheeky broadcast of the thorny realities underlying Jewish-Arab relations within Israel.”

In claiming “frightening” antisemitism at the conference about Gaza, Farber/ARC ignored other attendees’ perspectives and the individual at the heart of the controversy. Last month Nafar was featured in a New York Times story titled “Boycott Israel’s Election? A Palestinian Rapper Says No”, which was picked up by the Times of Israel, i24NEWS, Haaretz, etc.

More surprisingly, ARC/Farber ignored that the individual responsible for misrepresenting Nafar’s performance to attack the conference is a prominent anti-immigrant, anti-Muslim and anti-Palestinian activist who regularly appears on FOXNews. Ami Horowitz recently produced a video titled “The Left and the KKK may be separate, but they are equal!” and another that disparaged the Central American migrant caravan. In a 2017 video Horowitz claimed Swedish police refused to enter heavily immigrant areas. “These are areas that cops won’t even enter, because it’s too dangerous for them. This is the policy of the national police authority in Sweden”, Horowitz told an interviewer. Donald Trump repeated this obvious lie, as discussed in a Times of Israel story titled “Meet the gonzo Jewish filmmaker behind Trump’s fake news on Sweden.”

Two months ago, I asked ARC (and some other self-declared antiracist organizations) why they had never criticized the Jewish National Fund, which is the only explicitly racist institution sanctioned by the Canadian state to give tax write-offs. (My commentary on anti-racist organizations’ silence on Independent Jewish Voices’ StopJNFCanada campaign will appear in the upcoming edition of Canadian Dimension.) A politically and financially powerful organization, JNF does not hide its racism. In a 2007 Canadian Jewish News article titled “Human rights complaint accuses JNF of racism” its Executive Vice President Joe Rabinovitch admitted the organization discriminates in the provision of housing in Israel.

In my email exchange with ARC on the JNF I pointed out that they should tread carefully with Farber: “I presume you’re familiar with some of his [Farber] background, which is steeped in vicious anti-Palestinian rhetoric and a great deal of Islamophobia. He has righted some of the wrong he has done on demonizing Muslims, not so much on Palestinians. Here is an overview I did on him.”

ARC’s promotion of Farber’s anti-Palestinian politics is shameful. An anti-racist collective promulgating the anti-Palestinian views of a prominent anti-immigrant and anti-Muslim FOX News filmmaker is an embarrassment.