Five days ago, the United Nations Office of the High Commissioner for Human Rights (OHCHR) released another in a long line of reports purporting to provide an overview of the human rights situation in Ukraine. This latest report is titled “Accountability for killings in Ukraine from January 2014 to May 2016”. 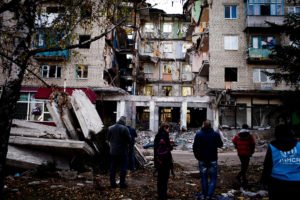 The report is 20 pages long with 31 additional pages of appendix examining “Cases of violations or abuses of the right to life in Ukraine from January 2014 to May 2016”. A press release by the UN body summarizes the content of the report.

The OHCHR report is another outlandish collection of selected facts making a strong inference that a large part of the “abuses to the right to life” it examines are the fault of the Donetsk and Lugansk people’s republics and their self-defense forces.

As with past reports, the OHCHR makes an equivalency between, on the one hand, the governing regime in Kyiv which is bound by all of the international conventions on human rights which previous Ukrainian government signed onto and, on the other hand, the people’s republics and armed forces of Donetsk and Lugansk which are not so bound. The Donetsk and Lugansk republics cannot sign on to international human rights conventions because they are shunned and unrecognized by most international bodies… including the OHCHR!

At last check, it is not the republics of the former eastern Ukraine which have invaded Ukraine, but Ukraine that has invaded and imposed an ‘Anti-Terrorist Operation’ against the people there. Yet the UN report describes Kyiv’s civil war as a “separatist conflict”.

Adding insult to injury, the UN press release says, “According to the report, the killings are being “fueled by the inflow of foreign fighters and weapons from the Russian Federation”.

The UN report fails to mention that even if such  a patently false description of the conflict as being a “separatist conflict” were true, Ukraine is nonetheless duty bound by international convention to protect its nominal citizens and not wage war against them.

The UN report speaks of shadowy “armed groups” in Donetsk and Lugansk who it says are responsible for extra-judicial killings as well as prisoner abuse, torture and killings. Yet when it comes to the extremist and neo-Nazi paramilitaries who are joined with Ukraine’s armed forces in waging civil war, they are given the polite description of “volunteer battalions”. Sounds downright patriotic and heroic!

When it comes to the Kyiv regime itself, the UN report language is all kid glove. For example, in professing concern about the Odessa Massacre of 48 people on May 2, 2014, UN press release writes:

The report also highlighted the violence that took place on 2 May 2014, in Odesa, during which 48 people died as a result of clashes between “pro-unity” and “pro-federalism” groups. OHCHR “remains concerned that the authorities have still not taken appropriate measures to ensure effective investigations into the 2 May 2014 events, nor to protect the independence of the judiciary,” the report said.

On that day in Odessa, nearly all of the victims were peacefully protesting against the coup in Ukraine in February 2014 which deposed the country’s elected president. They were targetted for killing when the trade union building in the center of the city where they had taken refuge from a right-wing mob was set on fire.

Further in the press release we read:

Furthermore, the report found that the lack of accountability remains widespread in Ukraine, despite efforts by the Government [sic] to bring perpetrators from its own ranks to justice and the pre-trial investigations by the Office of the Chief Military Prosecutor into cases of killing, torture and ill-treatment by members of the armed groups of the self-proclaimed [sic] “Donetsk people’s republic” and self-proclaimed “Luhansk people’s republic.”

While acknowledging the challenges faced by the authorities in ensuring justice, including the lack of access to the territories where many of the alleged acts took place, the report noted “an apparent lack of motivation to investigate some cases … especially when it concerns acts allegedly committed by Ukrainian forces.”

What about the Minsk-2 ceasefire agreement, signed by Ukraine on February 12, 2015 and endorsed by no less than the UN Security Council several days later? Not a word of it in the OHCHR press release. In the 20 pages of the report, one finds several references to the need to implement what is called the “Minsk Agreements”, but no detailed description of the content and import of the agreement is provided.

How bad is the official state of human rights in Ukraine? Two months ago, the UN’s Subcommittee on Prevention of Torture took the unprecedented step of cancelling in mid-visit an official visit looking into reported cases of torture by Ukrainian government forces and by rebel authorities in the east. The reason for the cancellation was that Kyiv refused to live up to its obligations under Optional Protocol to the Convention against Torture, an international convention to which a previous Ukrainian government signed on. It requires signators to provide to UN human rights monitors, upon request, unfettered access to prisons and other places of detention. The subcommittee was intending to investigate reports of secret prisons operated by Ukraine’s police and military services.

Oh, don’t look for information in this latest UN report on the telling experience of the UN’s Subcommittee on Prevention of Torture two months ago. Blank. Apparently, that would be unrelated to “Cases of violations or abuses of the right to life in Ukraine from January 2014 to May 2016”.