An Outbreak of Crass Cross-Party Economics

The UK has seen an outbreak of’ ‘cross-party economic’ initiatives whose ostensible function is to reach a bipartisan or multipartisan agreements to address crisis flashpoints in public policy, such as the National Health Service (NHS). The result is economically questionable – and serves to shore up the legitimacy of a government which is responsible for the crises.

There has recently been a spate of cross-party economic initiatives. Ostensibly they are designed to reach a ‘non-political’ consensus to address some areas of public policy where there is clearly a crisis, such as the NHS. In reality, the Tory government is turning to others for support and the Labour right and others are only too willing to help them.

The result is economically illiterate. But it may prove useful for addressing another crisis altogether, the legitimacy of the Tory government itself. It is all designed to prevent Jeremy Corbyn becoming the next Prime Minister.

The most glaring example of the nonsensical ideas designed to build a cross-party consensus is the notion of ‘hypothecating’ or ring-fencing National Insurance Contributions (NICs) to pay for the NHS (pdf). Almost all streams of government revenue as sensitive to the business cycle, NICs included. As Chart 1 below shows, revenues from NICs do not climb steadily but are interrupted by occasional sharp downturns coinciding with recessions. 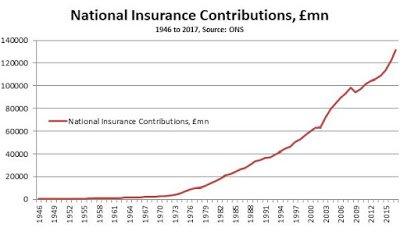 In contrast, outlays on elements of social spending such as the NHS continuously rise. In some recessions or prolonged slumps that rise accelerates as health deteriorates. We may be in one such period now. The growing queues and waiting lists reflect the government’s refusal to meet this increased demand.

The idea of hypothecating NICs revenue to fund the NHS can only appeal at the most superficial level. In the most recent year, the revenues and outlays almost matched, at around £130 billion.

But this overlooks the important fact that the NHS is already considerably underfunded. According to the King’s Fund, because of the further funding squeeze already announced in the Tories’ 2017 Budget, there will be shortfall of £20 billion by 2022/23 even compared to current NHS levels of provision.

The NHS is not just cyclically but is structurally underfunded. At 9.7% of GDP UK spending remains above the OECD average, as shown in Chart 2 below. But this includes economies whose per capita incomes are way below that of the UK. Almost all the countries with lower health spending are poorer than the UK. In addition, as UK real GDP growth has been exceptionally weak, this flatters the level of spending on health care.

Chart 2. Health spending in the OECD as a proportion of GDP, 2016 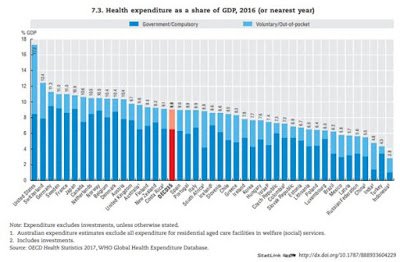 The consequences of this underfunding are severe. There is a very strong correlation between health spending and life expectancy. UK life expectancy has fallen back towards the OECD average, which includes these economies with far lower incomes than the UK. It has also seen one of the smallest improvements in the OECD over the long run. This is shown in Chart 3 below, taken from the OECD Health at a Glance 2017. 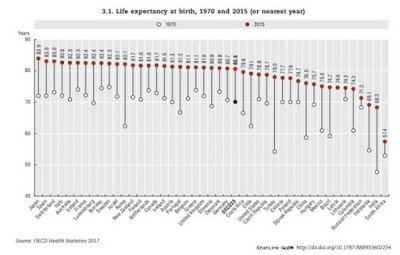 In some parts of the country, where there has been prolonged disinvestment, life expectancy is actually falling in absolute terms. Although the Financial Times managed to see the silver lining, arguing that it would reduce companies’ pension deficits.

The central fallacy of the hypothecation argument is to ignore the fact that health spending rises as a proportion of GDP over time. This is because improving living standards require greater spending on health, and ageing populations require a greater proportion of incomes to be spent on health. This means any government revenue stream linked to GDP growth, such as NICs, will fall short of what is required to fund a decent health service.

According to the Office for Budget Responsibility (OBR) revenues from NICs will barely increase as a proportion of GDP over the next 40 years, while outlays on health will rise proportionally by over 70%. The authors of the hypothecation report must surely know this, even if some of their political supporters do not. In effect, the attempt is to limit the natural rise in health spending by throwing a millstone around its neck. The consequences would be very adverse for the quality of health care and could be dramatic for life expectancy.

The effort to promote cross-party ‘solutions’ to serious economic and social questions is not confined to the NHS spending/NICs revenues. Recently there has been a welcome for Jeremy Hunt in announcing £6 million in support for children of alcoholic parents, even though the Tories cut £598 million in mental health services annually. There are many such similar examples, representing a concerted effort to shield the Tories from the fall-out of their own policies.

Politically, there has also been a revival of the ‘progressive alliance’ project. There is nothing progressive about Labour promoting the LibDems, or giving way to any forces to their right.

These are not policy proposals to address real issues. They are window-dressing on the austerity project. They are also an attempt to sow confusion to shield the Tories’ benefit and to prevent the Corbyn-led Labour Party from reaping the political benefit of its own anti-austerity policies.