‘An Earthquake’: how Israel’s arabs achieved their historic election win 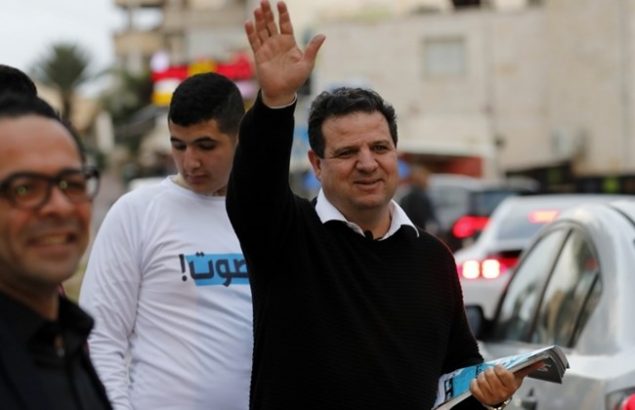 “Arab Israelis definitely ‘came out in droves’ this election – and got an extra boost from Jewish voters. The result is a record number of Arab lawmakers, including five women.” An excellent and detailed analysis of the Arab Israeli vote.

With more than 90 percent of the vote counted after Monday’s election, the country’s Arab citizens have good reason to celebrate. As it stands, the Joint List (an alliance of four Arab-led parties) will have 15 seats in the next Knesset, two more than it had in the last government.

As a result, 17 Arabs – an all-time record – are set to serve in the 23rd Knesset: 14 Joint List lawmakers (the Hadash faction has one Jewish member, Ofer Cassif), along with three lawmakers representing Jewish parties. Likud, Kahol Lavan and Yisrael Beiteinu each have one member of the Arabic-speaking Druze minority on their tickets.

The number of Arab women serving in the Knesset also looks set to break records. The Joint List has four women in its top 15 spots, more than most Jewish parties, and Kahol Lavan has one female Druze lawmaker (Gadeer Mreeh). Occupying 15th spot on the Joint List slate is Iman Khatib, a representative of the Islamic United Arab List, who will be the first hijab-wearing woman ever to serve in the Knesset.

Two key factors explain the big gains posted by the Joint List on Monday: a dramatic increase in voter turnout within the Arab community; and plummeting support for Jewish parties among Arab voters.

According to preliminary estimates, nearly 65 percent of the electorate in Arab towns and cities (this figure does not include mixed Arab-Jewish towns, where it is harder to break down the vote) voted in Monday’s election – the third in less than a year. This compared with about 49 percent last April and 59 percent last September. The turnout was the highest among Arab voters since 1999.

The four factions of the Joint List – which includes an eclectic mix of communists, religious Islamics, secularists and Palestinian nationalists – ran under two separate tickets last April. Together, these two slates won 71 percent of the total Arab vote. A disproportionate share of the rest went to the left-wing/Zionist Meretz party, which had two Arab candidates in its top five spots. In September, reunited as the Joint List, the same four factions won 81 percent of the Arab vote. 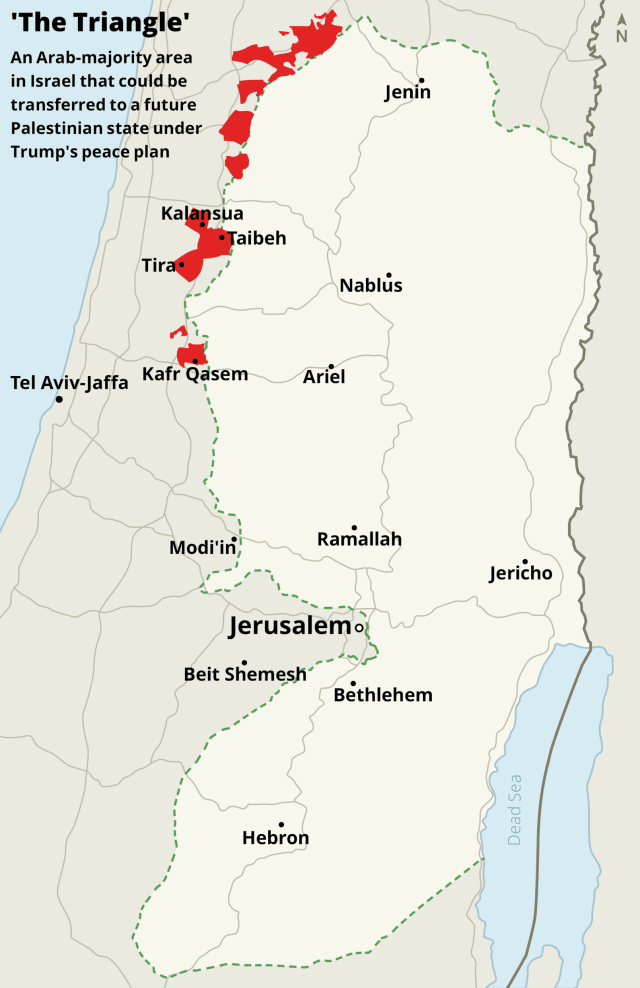 According to Israel Democracy Institute researcher Arik Rudnitzky, an expert on Arab society in Israel, the Joint List fared even better on Monday, capturing 88 percent of the Arab vote. “There was a general consensus in this election that if you’re Arab, the only way to vote is for the Joint List,” he says.

Thabet Abu Rass – co-director of the Abraham Initiatives, a nonprofit that promotes a shared society for Israel’s Jewish and Arab citizens – describes what transpired in Arab society on Monday as nothing less than “an earthquake.”

“Arab citizens have shown that they want to be involved in Israeli society and they want to be able to affect change,” he says. “You can say that this time they definitely came out in droves,” Abu Rass adds – alluding to Prime Minister Benjamin Netanyahu’s infamous attempt to rally his base on Election Day in 2015 by warning that Arab citizens were voting “in droves.”

Netanyahu’s ongoing attacks on Arab citizens and their political leaders were seen as a major contributor to the community’s increased turnout last September.

What brought even more voters out this time, Rudnitzky says, were deep concerns about U.S. President Donald Trump’s so-called “deal of the century.” Trump’s peace plan, unveiled at the end of January, sparked anxiety among Israel’s Arab citizens when it raised the possibility that they could be stripped of their Israeli citizenship as part of a land swap with the Palestinians. 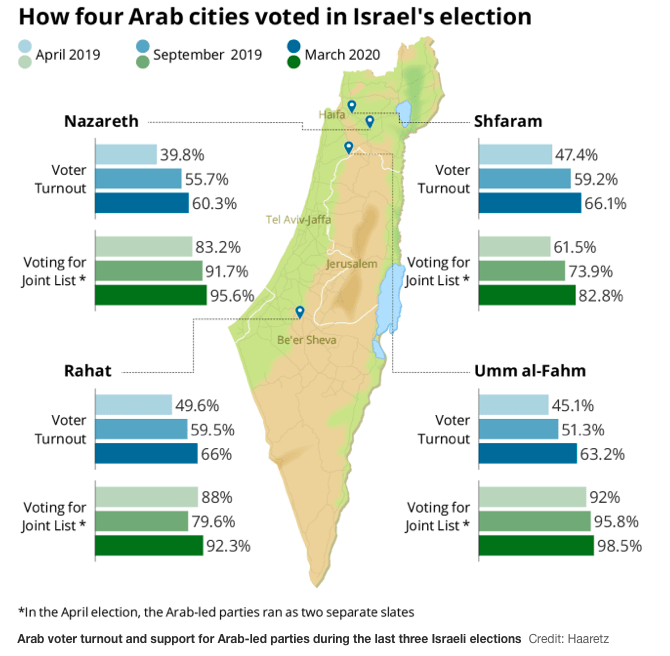 That population transfer would include a cluster of 10 Arab towns and cities known as “The Triangle,” where an estimated 350,000 Arab citizens live and where, according to Abu Rass, voter turnout was especially high on Monday.

Last September, the centrist Kahol Lavan – one of the two largest parties in Israel – won an entire seat from Arab voters thanks to a successful outreach campaign. According to Rudnitzky, the party performed much worse on Monday, with its votes in Arab areas dropping from about 39,000 to around 26,000.

Abu Rass says Kahol Lavan leader Benny Gantz was to blame for those lost votes. “The fact that Gantz said he didn’t want any support from the Joint List, after it had recommended him as prime minister [in September], was a humiliating blow to many Arab citizens,” he explains. “Many who voted for Kahol Lavan in September moved to the Joint List this time.”

Arab voters had saved Meretz from virtual extinction last April. Without Arab votes, the party would not have crossed the 3.25 percent electoral threshold. Support for Meretz was especially strong in the Triangle town of Kafr Qasem, home to its lawmaker Esawi Freige. In April, Meretz won 39 percent of the vote in Kafr Qasem – more than any other party. But then it merged with two other factions to form the Democratic Union and Freige failed to make it into the 22nd Knesset in September, when the Democratic Union won less than 26 percent of the vote in Kafr Qasem.

The Democratic Union then split up and Meretz subsequently merged with Labor-Gesher. As part of this new merger, Freige was bumped even further down the slate, with virtually no chance of getting into the new Knesset.

According to Rudnitzky, Labor-Gesher and Meretz lost half of their votes in Arab cities and towns between September and March.

“Interestingly,” he says, “the only Jewish party that managed to hold onto votes in the Arab community, and even win a bit more this time, was Likud, which went up from 8,000 to 8,800 votes.”

Abu Rass says the Joint List also received a major and unprecedented boost from local government leaders in the recent campaign. “Mayors of Arab towns and cities usually try to remain neutral during national elections, because they need to stay on the good side of the establishment,” he relays. “This was the first time we have seen Arab mayors actually come out and call on residents to vote for the Arab parties. And it worked.” 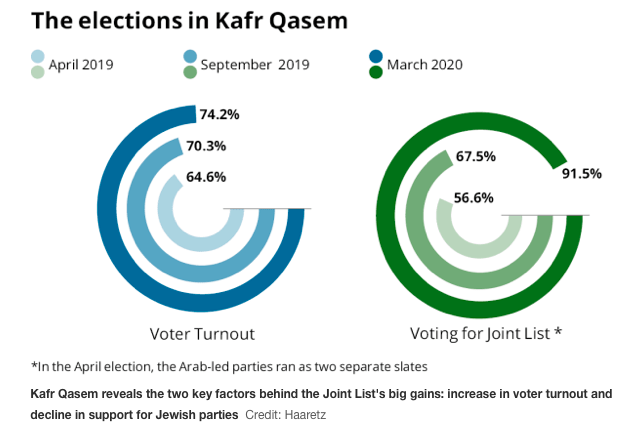 Also key to the Joint List’s success, in his view, was the fact that women were given prominent places on the ticket, which served as an incentive for Arab women to come out and vote. As well as Khatib in 15th spot, another woman who had never served in the Knesset was just above her: Sondos Saleh, from the secular Ta’al faction. They will join Aida Touma-Sliman from Hadash, who previously served as chair of the Knesset Committee on the Status of Women and Gender Equality – the first Arab woman ever to hold this position – and Heba Yazbak from the nationalist Balad faction, who was elected for the first time in September.

The Joint List also enjoyed unprecedented support from left-wing Jewish voters – most of them disillusioned Meretz supporters. These voters were unhappy with what they perceived as Meretz’s lurch to the right (Gesher leader Orli Levi-Abekasis previously served in Avigdor Lieberman’s right-wing Yisrael Beiteinu party), and the fact it had no Arab candidate in a safe spot on its slate.

According to preliminary estimates, the number of votes the Joint List received from Jewish voters – primarily in Tel Aviv and Haifa – doubled between September and March.