TORUN, Poland—When the far-right Law and Justice (PiS) party won Poland’s parliamentary elections on October 25, it was clear that the country was headed for change. But few expected anything like what has followed: purges of senior security officials, threats against public broadcasters, a police raid on a NATO–affiliated office and a deepening crisis over the constitutional court. 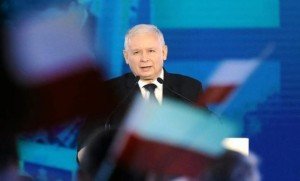 On December 28th President Andrzej Duda (nominated by PiS, though technically non-partisan) signed a law that would, among other things, require Poland’s constitutional tribunal to approve all verdicts by a two-thirds margin, crippling its ability to review legislation.

PiS has appointed five additional judges to the tribunal, in a move the standing judges ruled unconstitutional. PiS politicians refer to the court as a bastion of the previous Civic Platform government that must be subdued. Liberals and centrists have taken to the streets in protest.

Observers wondering why a stable EU member with a growing economy has suddenly plunged into such turmoil might do well to visit Torun, a small city in northern Poland. Torun is home to Radio Maryja, an ultra-conservative radio station run by Father Tadeusz Rydzyk, a Roman Catholic priest. From its gated headquarters, guarded by silver-haired devotees, it broadcasts warnings against “gender ideology” (an umbrella term for feminism and gay rights) and the “Islamisation” of Europe.

The station’s audience is small, under 2 per cent of all listeners. Yet its political ideology is close to that of the new government. PiS would not have won without Radio Maryja, said Jaroslaw Kaczynski, the party’s leader, at the broadcaster’s 24th anniversary celebration in December.

The 70-year-old Father Rydzyk does not think much of the way Poland has evolved since the end of communism. The country needs a spiritual renaissance, or it will become a “republic of bandits, thieves and perverts”, he said in an October interview with Nasz Dziennik, the daily newspaper he publishes.

Like PiS, Radio Maryja propounds social conservatism, suspicion of Brussels and hostility towards refugees from the Middle East. The station’s listeners are sympathetic to conspiracy theories positing that the parties that have ruled Poland since the 1990s (apart from PiS) are secretly controlled by communist apparatchiks. Right-wing demonstrators often demand that the constitutional court be “decommunised”, a request that leaves its moderate justices bemused.

Radio Maryja’s listeners are not so much religious fanatics as the socially vulnerable. It speaks to Poles alienated by economic and cultural change. Religious symbols are their means of showing discontent, says Tomasz Szlendak, a sociologist at the University of Torun; Radio Maryja is the only media outlet that “speaks their language”.

PiS, too, blends religious and nationalist symbolism with a focus on social injustice; a new monthly child benefit crowns the government’s list of election promises. Some people term PiS the “pious left”. The party castigates its critics as heathen liberals. “Every hand raised against the Church is a hand raised against Poland,” said Jaroslaw Kaczynski in December.

Like Father Rydzyk, Mr Kaczynski speaks of PiS’s election as the first step in a spiritual renaissance that will remake the Polish state. But his party’s interference with the constitutional tribunal has raised hackles in Brussels. The European Commission had asked the Polish government to put the process on hold; Mr Duda ignored the request. On January 13th, the commission will meet to discuss the statute and whether it infringes EU treaty commitments to the rule of law.

Meanwhile, Father Rydzyk, too, is disappointed in the new government. After a spat over access to the president, he threatened to break off co-operation, saying he expected his media outlets to be “treated differently”. It remains to be seen whom Mr Kaczynski and his party fear more: the EU, or Radio Maryja.

A day after enforcing controversial constitutional reforms, the Polish government launched a new parliamentary initiative on Tuesday (29 December), this time to put public media under its control. According to a bill presented to MPs, the head of the Polish public radio and television will be dismissed and replaced by three-member boards “appointed and dismissed by the minister of the treasury”…

“The ethos rooted in Christianity and Polish traditions of freedom and independence is marginalised or discredited, while an ideological and moral fashion unacceptable to the majority of the population is ennobled,” said MP Elzbieta Kruk of the ruling Law and Justice party (PiS) during debate in the Sejm, Poland’s lower house…