‘All of us are in danger’: John Pilger delivers a chilling warning from Julian Assange 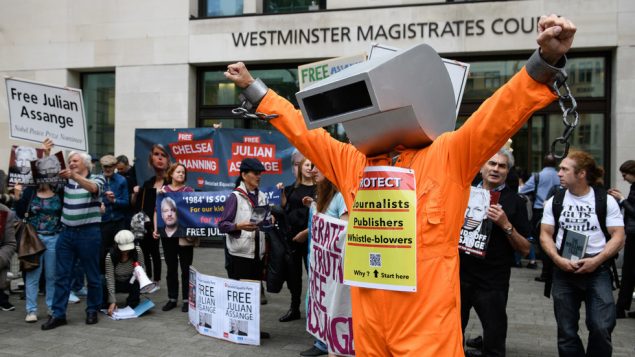 It’s four months since Julian Assange was incarcerated within the walls of the UK’s high security Belmarsh Prison, something that journalist John Pilger made very clear as he delivered a stark warning from the WikiLeaks co-founder, who said that his persecution is intended to kill dissent. “Speak up now,” Pilger said, or face “the silence of a new kind of tyranny.”

Assange is currently serving a 50 week sentence in Belmarsh Prison for skipping a bail hearing in 2012. US authorities are seeking his extradition for his role in publishing classified documents, accusing him of espionage. Speaking at a rally outside the Home Office in London on Monday, Pilger passed on a message from the WikiLeaks editor who, if extradited and convicted, could be sentenced to 175 years in prison.

It’s not just me. It’s much wider. It’s all of us. It’s all journalists, and all publishers who do their job who are in danger.

“The danger Julian Assange faces can easily spread to the present and past editors of the Guardian, the New York Times, Der Spiegel, El Pais in Spain, the Sydney Morning Herald, and many other newspapers and media outlets that published the WikiLeaks revelations about the lies and crimes of our governments,” Pilger continued.

“By defending Julian Assange we defend our most sacred rights,” Pilger warned. “Speak up now or wake up one morning to the silence of a new kind of tyranny.”