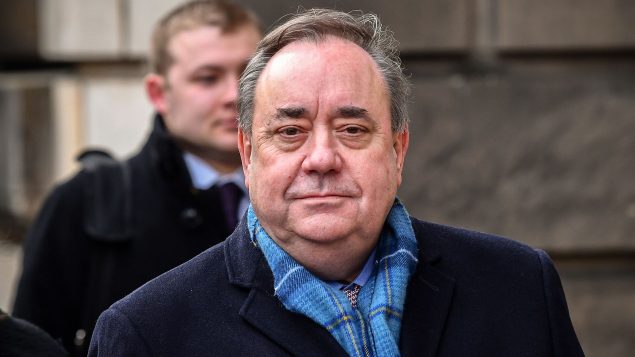 Yesterday, a mostly-female jury drawn in its entirety from the most Unionist city in Scotland delivered the only verdict it was credibly possible to reach on the (total absence of) evidence before them: that Alex Salmond was not guilty on all charges.

Today a mostly-female jury drawn in its entirety from the most Unionist city in Scotland delivered the only verdict it was credibly possible to reach on the (total absence of) evidence before them: that Alex Salmond was not guilty on all charges.

After two weeks hearing an assortment of lurid allegations from former friends and colleagues hidden behind cloaks of public anonymity, the jury – having been advised by the prosecuting counsel that they were the sole arbiters of fact – decided that there was no truth to them.

Since the two most serious charges, in particular, were both matters of the accuser’s word against that of the accused, and the two parties gave completely irreconcilable accounts of the facts (rather than competing interpretations of agreed events), it can only be the case that one side was lying absolutely, and the jury decided that it was the anonymous accusers who were doing so.

It remains to see whether there will be a legal reckoning for those lies. But more than one sort of reckoning will surely follow from these events.

Because to the surprise of many Yessers who considered the whole trial a Unionist conspiracy, it transpired that in fact every accusation had come from people who’d been on Alex Salmond’s own team – either his political colleagues or his staff.

The Scottish Government and the notionally-Scottish civil service had first colluded on a private investigation which was both so ham-fisted and so unlawfully biased that it collapsed in a shambles which has cost the Scottish taxpayer over £600,000. 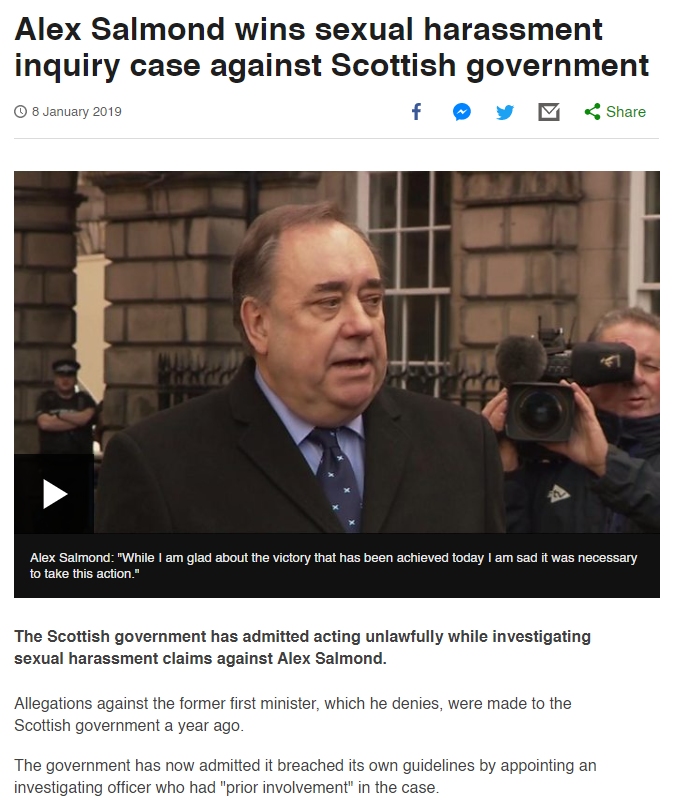 Even the Times – no cheerleader for Alex Salmond by a very long chalk – was so appalled at the flagrant crookedness of the proceedings that it called for the head of Leslie Evans, permanent secretary to the Scottish Government and the most senior civil servant in Scotland. 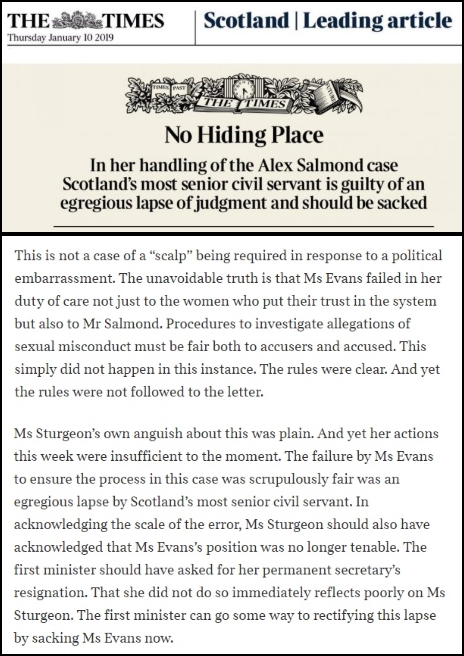 Instead, the Scottish Government inexplicably chose to not only uphold but extend her contract – a decision which is ultimately made by the First Minister of Scotland. 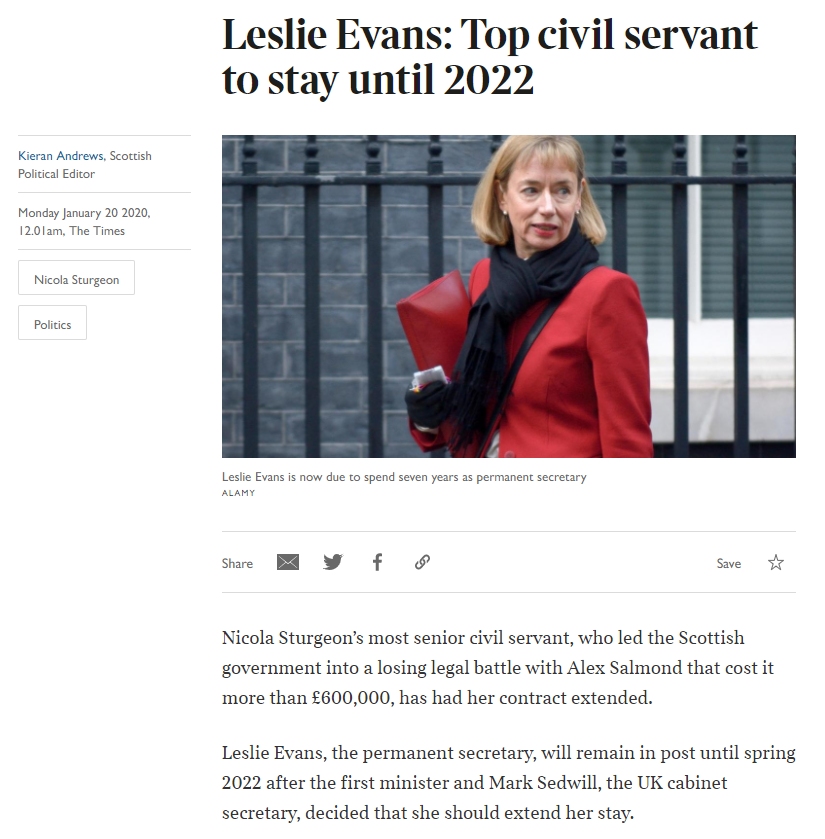 It is at Nicola Sturgeon’s personal discretion that Leslie Evans remained in her post and indeed received a further endorsement, leading to widespread mutterings that Evans, in the common parlance, must surely “know where the bodies are buried”.

The fact that Evans’ catastrophically botched and dishonest inquiry did not, in the end, bring about the imprisoning of an innocent man for several years is one of the few meagre positives of this entire fiasco. But the ordeal which Alex Salmond has been forced through for the last several years is one which someone, or several someones, ought in any fair society to be made answerable for.

(I personally have some small sense of the stresses both of a high-profile court caseand of being wrongfully arrested on completely fictional harassment allegations, and what Alex Salmond has endured is orders of magnitude greater, so I both empathise and admire his fortitude.)

That this trial ever reached a court is a gravely worrying matter. Allegations of serious sexual assault must always be taken seriously and investigated fully, but what the trial revealed is that not a shred of evidence supported any of the charges in the case.

Scots law uniquely requires corroboration, and despite several of the alleged offences supposedly occurring in full public view in locations thronged with people, not a solitary witness observed any of them. The Crown’s only hope of securing a prosecution was therefore to rely on the enormously disturbing “Moorov doctrine”, a 90-year-old facet of Scots law whereby the prosecution collecting sufficient unproven innuendos together somehow magically transforms them into solid evidence.

In order to avail itself of this sorcery, the prosecution trawled three decades of Alex Salmond’s political life at both Westminster and Holyrood, interviewing close to 400 people, and managed to scrape up a derisory handful of allegations – all but one from a four-year period between 2010 and 2014, the exception being from 2008 – of such startling triviality that many observers found themselves unable to believe such things could ever be considered crimes.

(The nadir being the claim that Salmond had “pinged” a colleague’s curly hair in a lift, in the presence of at least one other person.) 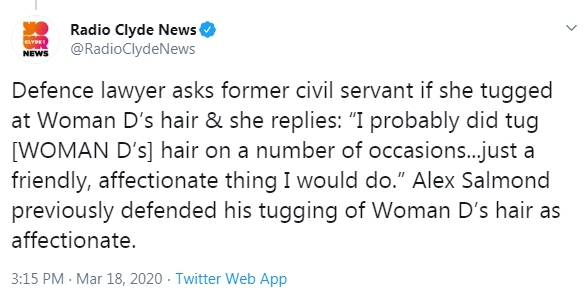 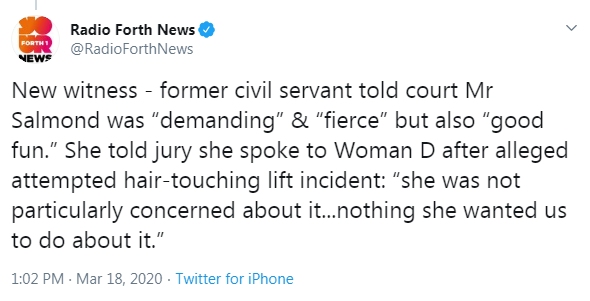 Not all of the allegations made it as far as the court, with several – including some which had been the subject of prominent media coverage – being quietly dropped prior to or during the trial, presumably on the grounds of being too laughable.

But jurors were asked to believe that women Alex Salmond had known for many years, and who occupied senior roles in politics, were too terrified to object when he touched their leg in a car during a 30-second journey (despite there being a large fixed armrest between them which would have made such an act impossible without it being extremely obvious to the other people in the car).

They were also asked to accept that it amounted to criminal behaviour corroborating an attempted-rape charge to recount to an adult woman an anecdote about a well-known Scottish political journalist from the Herald newspaper passing out drunkenly at Bute House after a sexual encounter with his girlfriend, even though the “victim” had by all accounts gleefully repeated the same story to her own colleagues the next day. 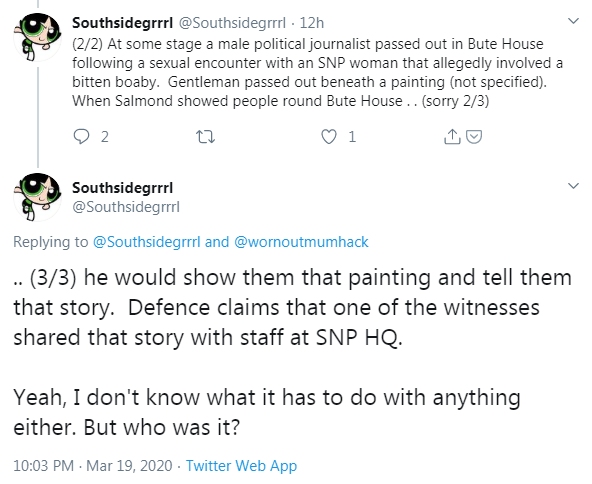 Jurors were also asked to believe that a string of women who’d had a powerful man sexually assault or attempt to rape them elected not to report this extremely serious matter to the police, but to get together with senior SNP officials and store up the allegations for use in case Salmond ever attempted to return to politics. 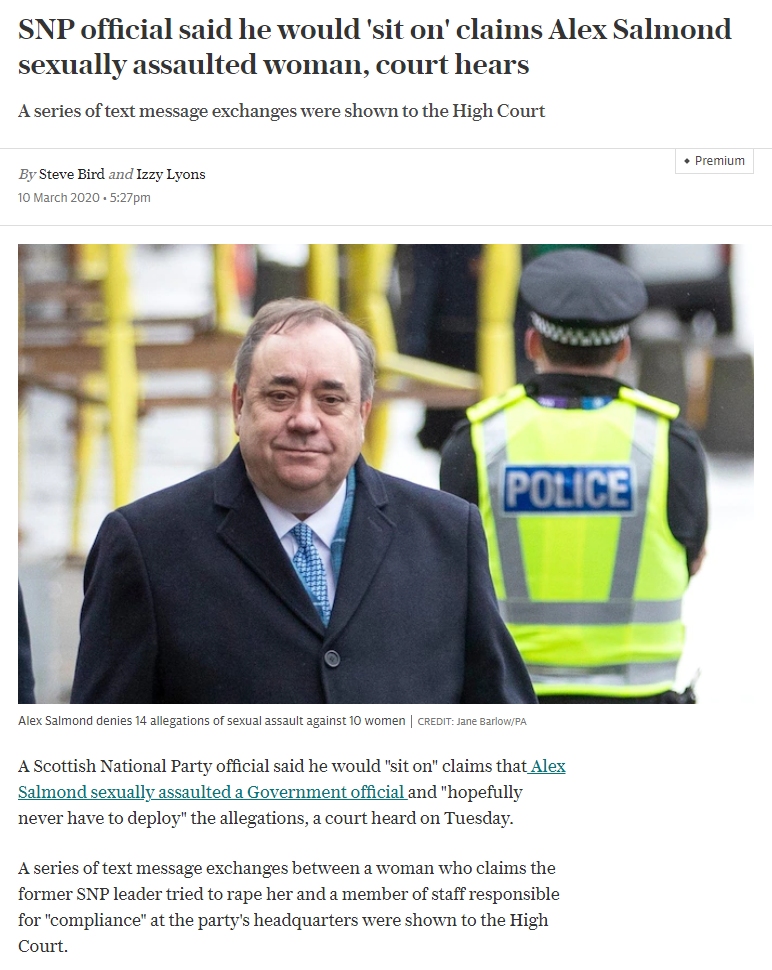 And by a remarkable coincidence the allegations duly came to light in August 2018 – shortly after he’d signalled that intent, in May of the same year: 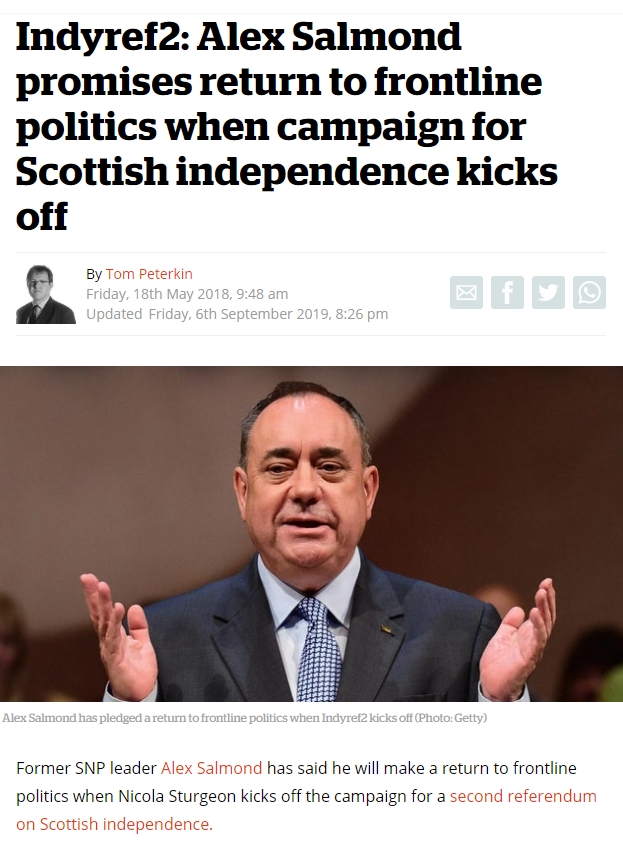 It wasn’t until Alex Salmond successfully sued the Scottish Government over Leslie Evans’ shambolic inquiry that the police were informed of the claims and became involved, which cynical readers might interpret as less a cry for justice than an attempt to deflect attention from the collapse of the inquiry and its crooked nature.

Remarkably, despite Alex Salmond having been a politician for over 20 years and First Minister for more than seven, there wasn’t a single allegation from all his time at Westminster. There wasn’t one allegation from a member of the public, nor from any of the many female journalists who’d interviewed him alone in hotel rooms and the like.

Every single accuser came from a very small circle within the SNP, or civil servants very closely connected to that circle – a circle at whose centre sit Nicola Sturgeon and Leslie Evans. We must note that no evidence directly links the First Minister to the events of the case, just as no German government document from 1939 to 1945 exists which explicitly connects Adolf Hitler to the Holocaust.

Readers may or may not draw their own conclusion from those facts.

The Scottish media, it probably goes without saying, covered itself in disgrace during the trial. Reports from the courtroom were extraordinarily selective, and always selective in favour of the same side. This site was fortunate in having sources very close to the case to relate what had really happened and what the media had left out.

(Again I can confirm from my own personal experience during the Kezia Dugdale case that this is a modus operandi for the Scottish press rather than a coincidence.)

Observers suspected of harbouring sympathies for the defence side rather than the prosecution side were simply excluded from the court for most of the proceedings. Fortunately the jury heard what the Scottish public were not told.

This included details of the most unfathomable and worrying occurrence of the trial – the evidence of a celebrity present at a Bute House dinner on the evening of the most serious charge, the attempted rape of Woman H.

The media reported that the celebrity remembered Woman H being at the dinner, based on video of a police interview with him during the investigation.

The reality was that his recollection was far more vague and equivocal, but he was not called as a witness to be cross-examined by the defence. This site finds it quite extraordinary that such a piece of potentially key evidence should be ruled admissible without the possibility of scrutiny, and is yet to hear any explanation of why that would be the case. 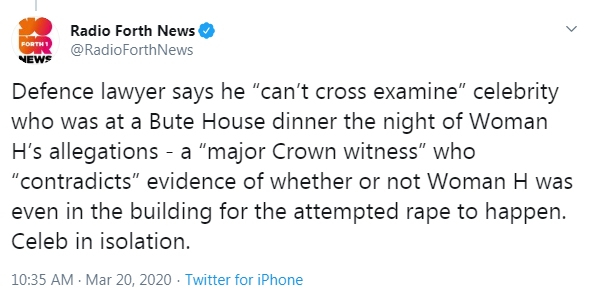 The fact that the celebrity is in isolation over the coronavirus would not prevent evidence by video link, for example. But if such an arrangement is not possible then it seems wildly improper that the evidence would be allowed to stand, particularly given that a witness who said Woman H was NOT at the dinner – flatly contradicting the celebrity’s supposed account – WAS robustly and extensively cross-examined and had her evidence challenged. 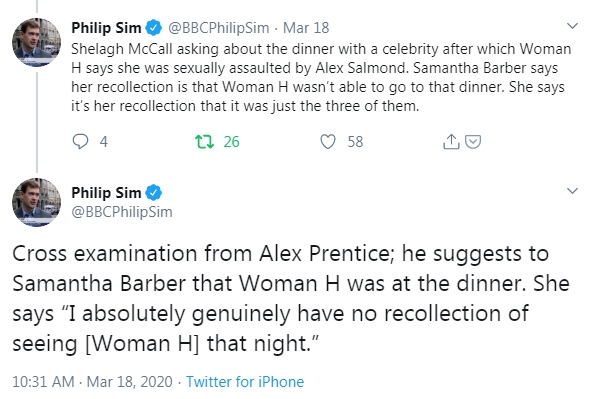 We could spend several thousand words going over the holes in each of the individual charges, and the facts revealed about them in court which were never conveyed to the public by a media more intent on keeping up a constant stream of shock-horror headlines covered by the tiny figleaf of quotemarks.

There are additional deeply concerning facts about the case which even now we’re not certain we’re at liberty to reveal. We’ll tell you whatever we can establish we’re legally able to. Either way more details are likely to emerge in the coming days, weeks and months, though perhaps the coronavirus crisis will serve as a grim distraction to spare some blushes.

But let there be no mistake – while justice was done in the end, the events surrounding the trial of Alex Salmond are murky and dirty and suspicious in the extreme, from the highest levels all the way down, and it will be the gravest injustice imaginable if nobody pays a price for them. Only time will tell if that’s the case.

What we know for sure is that Alex Salmond walks away from the court a free man without a stain on his character, found innocent of even the least of the accusations against him. What he chooses to do next with that freedom is something this site will watch with very keen interest.