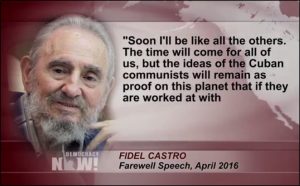 Democracy Now! broadcast on Nov 28, 2016 on the passing of Fidel Castro

The November 28 edition of Democracy Now! devotes its full, one-hour episode to a roundtable discussion on the life and legacy of Cuban revolutionary leader and former President Fidel Castro. He died on November 25 at the age of 90.

Castro survived 11 U.S. presidents and more than 600 assassination attempts, many orchestrated by the CIA. He died 60 years to the day after he, his brother Raúl, Che Guevara and 80 others set sail from Mexico in 1956 to begin what became the Cuban revolution to oust the U.S.-backed Cuban dictator, Fulgencio Batista. The revolution triumphed on January 1, 1959. It would inspire revolutionary efforts across the globe and lead Castro to become one of the archenemies of the United States.

Democracy Now!‘s guests are journalist and activist Bill Fletcher, a founder of the Black Radical Congress; Peter Kornbluh, director of the Cuba Documentation Project and co-author of Back Channel to Cuba: The Hidden History of Negotiations Between Washington and Havana; and Louis A. Pérez Jr., a professor of history at the University of North Carolina at Chapel Hill and author of several books, including Cuba: Between Reform and Revolution. 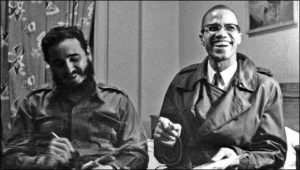 Fidel Castro and Malcolm X in New York City in 1960

Black America and the passing of Fidel Castro, by Bill Fletcher, published on Telesur, Nov 26, 2016