A military coup is still on the cards in Brazil 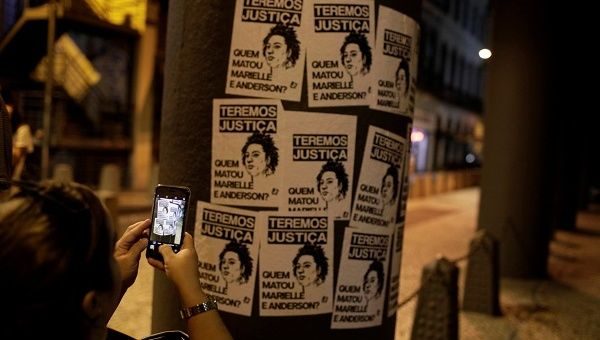 Protest placards at a rally against the shooting of city councilor and activist Marielle Franco in Rio de Janeiro, Brazil. | Photo: Reuters

By Eduardo Montesanti, Mar 21, 2018. Brazil is locked in a deep-seated state of hatred, especially against the poor, blacks and leftists – a sentiment aggravated by the ongoing financial crisis. Military intervention in Rio de Janeiro has been considered by the Army and the President. This report, published before left candidate Lula was jailed and prevented from standing, is still highly relevant

Brazil is locked in a deep-seated state of hatred, especially against the poor, blacks and leftists – a sentiment aggravated by the ongoing financial crisis.

Military intervention in Rio de Janeiro has been considered by the Army and President Michel Temer: a “laboratory for Brazil,” the commander for the operation says, as Brazilian historian Vitor Schincariol warns that “right-wing forces aim to stop popular organizations.”

The military has been giving out magazines to children in Rio since the first days of the intervention. The cover shows a red monster (the ‘red danger’) trying to attack a white-skinned, blond-haired boy, protected by the military. This has everything to do with the assassination of 38-year-old activist and councilwoman Marielle Franco, of the Socialism and Freedom Party, on March 14.

The ammunition used in Franco’s murder, committed just 30 days after the military first occupied Rio de Janeiro, apparently came from the federal police. The 9mm bullets were reportedly acquired in 2006 in a shipment purchased from police teams in Brasilia. Chances are that Franco’s assassins acquired them, directly or indirectly, because of corruption within the federal police.

Four days before her execution, Marielle published on social media a note repudiating the 41st Battalion of the Military Police of Rio de Janeiro. According to Franco, police officers murdered two young men then threw their bodies into a river. The 41st Battalion is the most violent in the state: widely known in the favelas (slums) of the Northern Zone as a den of bandits, abusers, executioners and torturers of the unarmed masses.

Brazil’s mainstream media are depicting Marielle as an activist for an abstract struggle, not putting into context her ethnic, political and class causes – the reasons the black, socialist favela militant was murdered.

This crime has much to say about the frightening reality in contemporary Brazil. As Brazilian historian Vitor Schincariol says: “The murder of Marielle intends to put the Brazilian Left under pressure of fear.”

Franco was famed for speaking out about the grave crimes of public security organs against favela residents, the vast majority black and poor, in the very city the military claims to be securing during these dark days.

Two weeks before she was murdered, Franco had taken part in a commission to analyze President Temer’s military intervention in Rio. She soon started denouncing the evident abuses, which suggests she may have been summarily executed as a result.

On February 19, Army Commander Eduardo Villas Boas said that the military intervening in Rio’s security needs “guarantees” to avoid confronting “a new Truth Commission” (between 2012 and 2014, a Truth Commission was set up in Brazil to investigate military crimes committed during the dictatorial regime, between 1964 and 1985).

A study released March 15 by the local press and official military police channels shows there were 149 fatal shootings last month in Rio, compared with 126 between January 15 and February 16 of this year. Shootings in the presence of a security officer represent 133 of the total number of this past month. Between January and February, that number was 106.

In September 2017, 48 percent of Brazilians supported another military coup. That number has since risen to 74 percent in Rio: “a laboratory to Brazil,” according to General Braga Neto. He heads the intervention and is clearly insinuating his intention to militarize the entire country again – no surprise, given recent events and daily life since 2013, when Brazil experienced its ‘Spring.’

Brazil is locked in a deep-seated state of hatred, especially against the poor, blacks and leftists – a sentiment aggravated by the ongoing financial crisis. It feels as though every road leads to another military intervention. All over the country, leftist militants and intellectuals are experiencing institutionalized persecution by public sectors.

It has been confirmed that the Public Prosecutor’s Office has been influenced by the Washington regime, especially in condemning former President Luiz Inacio Lula da Silva. “The right-wing forces aim to stop the popular organizations,” says Schincariol, a historian at the Universidade Federal do ABC (UFABC) in Sao Paulo.

In this 2015 video showing a Catholic meeting in Brasilia to debate social justice and peace, a bishop is attacked: a frightening case of hysteria which perfectly depicts today’s Brazil.

Temer took power as a military and U.S. puppet. The total failure of his economic measures; his mandate’s lack of legitimacy, and the political discredit in Brazil as former President Lula was condemned in a court manipulated by Washington (Judge Serio Moro took secret courses in the United States, according to WikiLeaks), combined with social upheaval exacerbated by the murder of Franco means that now, more than ever, a military coup is imminent in Brazil.

Prof. Dr. Schincariol observes that “given the disparities existing between the right- and left-wing forces relating to their military capacities, triggering an open civil war is the very goal on the behalf of some conservatives forces. It would justify a still more fierce use of military forces by the state. It is a new kind of scenario, and the democratic forces should worry about it.”