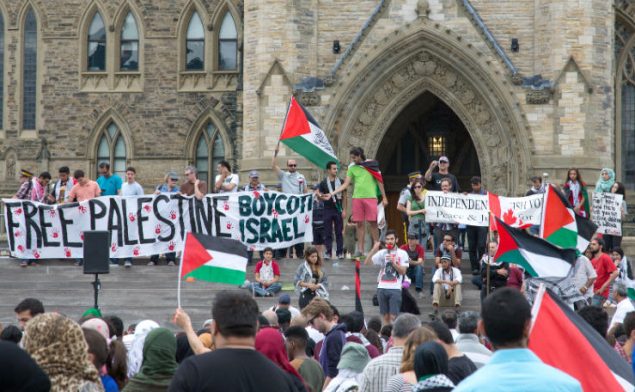 Human rights activists are organizing to stop lawmakers in Ontario from passing a bill that could criminalize criticism of Israel under the cover of fighting anti-Semitism.

Human rights activists are organizing to stop lawmakers in Ontario from passing a bill that could criminalize criticism of Israel under the cover of fighting anti-Semitism.

According to Independent Jewish Voices (IJV), a Canadian human rights group, a bill that would adopt the International Holocaust Remembrance Alliance definition of anti-Semitism will come to a vote in the Ontario legislature this week.

More than 400 emails have been sent to all #Ontario MPPs in the last 24 hours calling on them to oppose Bill 168! Let's keep the letters coming!

Fight #antisemitism and white supremacy, not freedom of expression on #Israel–#Palestine#noIHRA #onpoli https://t.co/dT3jJn82xJ

Yet another reason why we must oppose the drive to adopt the #IHRA redefinition of #antisemitism – graduate students at @UBC in Vancouver were falsely accused of antisemitism for voicing criticism of Hillel's pro-Israel stance. Via @TalonUBC #NoIHRAhttps://t.co/RPWY9nTcAU

The IHRA definition has been pushed and promoted by major Israel lobby groups across Canada in order to shield Israel from criticism over its human rights violations.

As Sid Shnaid of IJV recently wrote in The Electronic Intifada, “The main problem with the definition is that appended to it is a list of 11 illustrative examples of anti-Semitism, seven of which relate to what the authors define as illegitimate criticism of Israel.” IJV has launched a national #NoIHRA campaign to oppose the codification of the IHRA definition into Canadian law.

Last month, Montreal joined Calgary and Vancouver in rejecting a motion to adopt the IHRA’s “working definition” of anti-Semitism.

Those cities dissented from Prime Minister Justin Trudeau government’s announcement last year that the IHRA definition would be formally adopted as part of its strategy to “combat racism and discrimination.”

IJV says that more than 300 members and supporters sent letters to Montreal city council members expressing their opposition to the measure.

“This is another major victory for all who oppose antisemitism and support Palestinian human rights,” said Corey Balsam, the group’s national coordinator, in a statement at the time.

“We strongly believe that our safety as Jews is intimately tied with the safety and well-being of other communities targeted by hate and bigotry, and that includes the Palestinian people.”

Watch Independent Jewish Voices’ video on the mobilization against Ontario’s bill above.

Earlier this month, the Minister of Foreign Affairs, François-Philippe Champagne, condemned the BDS movement and chastised “any attempt to single out or isolate Israel,” adding that Canada “is, and will always be, a steadfast ally of Israel.”

Yesterday during Question Period, I had the opportunity to rise in the House to ask Foreign Minister @FP_Champagne to reaffirm the Government’s stance on the BDS movement. His response was unequivocal, “Let me be firm and clear to all Canadians; we condemn BDS.” #yorkcentre pic.twitter.com/vuXg1Xufjb

On the contrary, @JustinTrudeau’s government has voted in favour of #Israel’s apartheid regime far more often than it has voted against it. Yes, Trudeau has “singled out” Israel – he has conferred upon Israel the privilege of being above international law.

Attorney and activist Dimitri Lascaris noted that Trudeau has indeed “singled out” Israel by handing Israel “the privilege of being above international law.”