The Guardian and the The Moscow Times are reporting that broadcasting of “the world’s only Crimean Tatar-language television channel” ceased last week. The ATR channel had until April 1 to renew its license to broadcast by Russia’s state media overseeing body, Roskomnadzor. Its renewal application failed.

ATR‘s previous license was issued by Ukraine. The station is majority owned by businessman Lenur Islyamov, a Crimean Tatar. He also owns a children’s television channel and two FM radio stations. These have also gone off the air. (Russian-language news report here.)

The Moscow Times reports in its article that the head of information and communications for Crimea, Dmitry Polonsky, accuses the channel owners of deliberately provoking a political controversy by repeatedly submitting incomplete license applications.

The Guardian takes a harder tack than the Times, saying in its story headline that ATR is being “silenced” because it is critical of the decision by the Crimean people last year to secede from Ukraine. Reporter Alec Luhn writes:

Although the official reason the channel wasn’t registered was mistakes in its paperwork, ATR’s director, Shevket Memetov, tied the forced closure to the channel’s occasionally critical coverage of life under Russian rule.

Although ATR is not a 24-hour news channel, it has unflinchingly covered many of the problems that have arisen since Crimea joined Russia, including interruptions of utilities and food supplies, huge lines at the ferry crossing to Russia and the second-highest inflation rate in the world. In December, the United States and the European Union placed an economic embargo on Crimea.

The U.S. State Department has joined in, issuing a statement on April 2 which called the situation at ATR the “latest in a string of actions that undermine freedom of expression in Crimea.” 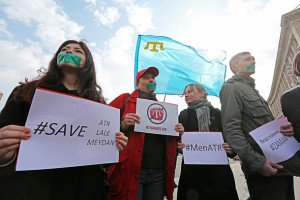 The European Union says ATR‘s inability to obtain a prompt license renewal is “a blatant violation of the right to freedom of expression” in Crimea and calls it “part of a wider pattern of persecution and intimidation of the Crimean Tatar community”.

The Guardian‘s Luhn reports on the press conference last month by the leader of the Crimean National Assembly Sergei Aksyonov in which he spoke of the role of ATR in agitating against the decision one year ago to leave Ukraine.

A report last month in Russian media cites Aksyonov: “We clarified to channel management that it is unacceptable to escalate the situation and provoke people’s fear associated with the fact that the channel gives hope for the return of the Crimea to Ukraine, inciting other people to action, and talking about how people who received Russian passports will be treated badly.

“The work of such channels on the territory of the Republic in the current semi-military time is unacceptable.”

The ‘Milli Firqua’ Peoples Party of Crimea, comprising a network of Tatar social organizations, denies that the licensing of ATR is an act of political suppression. In a published article on March 27, it states that the cultural programming of the channel was very praiseworthy but its news reporting was not. “Since its inception, the ATR television channel fervently played the role of the speaker of Parliament, methodically promoting the ideology of aggressive nationalism and the ‘values’ of Western democracy and their overseas patrons.”

The March 27 article traces the murky financial backing of ATR that allowed the channel to rise to prominence from its inception in 1994. Much of the channel’s expansion was financed by little known interests in Turkey and then by the aforementioned Russian businessman who bought it in 2011. 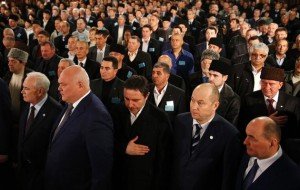 ATR frequently aired the views of the Crimea Mejlis, a decades-old commission of the Crimea Tatar national assembly (called the Kurultai). The Mejlis came to be controlled by right-wing, pro-Ukraine business and political interests. Milli Firqua says that appearances by non-Mejlis Tatar representatives on current affairs programs on ATR were very rare.

Milli Firqua challenges the narrative common in Western media that the Mejlis speaks for all Crimean Tatars. In an interview one year ago, Milli Firqua leader Vasvi Ennanovich explained that his party and the leaders of the Mejlis each have the support of 15 to 20 per cent of Crimean Tatars while the majority of the population does not engage directly in political expression or activity.

A survey of the Crimean population conducted in December 2014 asked for opinion of the “decision of Crimean authorities to join Russia”. Approximately 30 per cent of Tatar respondents say it was “wrong”, while an equal number say it was “generally right” and another 20 per cent say it was “absolutely right”. The final 20 per cent “don’t know” or refused to answer.

That survey as well as another one in January which was partly funded by a Canadian government agency and published by the large, German public relations firm Gfk showed overwhelming satisfaction in Crimea with the decision to rejoin Russia. The survey showed that even Crimeans of Ukrainian descent, who comprise 24 per cent of the peninsula’s population, were overwhelmingly favorable.

Tatars comprise app. 12 per cent of Crimea’s population. According to a census in December 2014, the population of the peninsula is 2.3 million. Crimean Deputy Prime Minister Dmitry Polonsky said last November that the population of Crimea had increased by 280,000 since the referendum vote in March 2014 to secede from Ukraine and join the Russian Federation.

Milli Firqua is critical of Crimea’s political leaders for failing to respond to proposals it made last year to democratize the Tatar media landscape, including creating a Tatar-language public broadcaster. It notes that many companies owned by wealthy Ukrainians in Crimea were nationalized or sold to different business interests following secession. But little or nothing was done about media ownership and broadcasting.

The party says that failure to act has allowed a “spectacle” to occur over the licensing of ATR. “Today, as a result of the negligence, incompetence or malice of officials, Crimea has a huge scandal with tantrums and screaming about national discrimination and infringement of fundamental human rights and freedoms, and a barrage of negativity broadcast to a international multinational audience. As a result, a threat of destabilization of the Crimean Peninsula has been skillfully played out against the background of noisy information to discredit Russia on an international scale.”

Milli Firqua was formed in 2006. It participated in several elections to the Crimean autonomous assembly during Ukraine’s rule over the territory. It defines its goal as “revival of the Crimean Tatar nation and the preservation of its national territory”. (See its Russian language Wikipedia page here.)

Crimea’s national television channel Krym reports in the Tatar language. There are other Tatar language media, including the newspapers The Voice of New Crimea‘, New World and The Star.

On April 21, 2014, Russian president Vladimir Putin issued a decree restating an earlier decree from the time of the Soviet Union that condemned accusations of collective guilt of the Crimean Tatar population for collaboration with the occupying Nazi German army during World War Two. Putin announced at the time, “I have signed a decree to rehabilitate the Crimean Tatar population, the Armenian population, Germans, Greeks – all those who suffered (in Crimea) during Stalin’s repressions.” The announcement was made to a meeting of Russia’s State Council and was shown live on state television.

Putin called for measures to encourage the “national, cultural and spiritual renaissance” of the minority groups. The decree aims, “to restore historical justice and remove the consequences of the illegal deportation (of the groups) and the violations of their rights”.

Crimean Tatars have their own political assembly (the Kurultai) and the right to education in their language. Since March 2014, economic and cultural ties have developed with Tatarstan, one of the republics of the Russian Federation and which has a population of 3.8 million.

Despite all this, Tatars are voicing important grievances. One is a claimed slow pace of political reform that would grant more political representation. And another is the unresolved claims to land and related property lost during the WW2 era deportation and its aftermath. Russian Foreign Minister Sergei Lavrov told journalists on April 4 that Russia is drafting a law to guide land redress for Crimean Tatars.

Of course, the great irony in the expressed concern of Western governments and media about press freedoms in Crimea is the fact that sweeping infringements on press and other freedoms in Ukraine, including the persecutions and jailings of journalists and antiwar activists and the prosecution by the Kyiv government of a murderous war against the citizens of the country, go unreported. Worse, Western media presents the actions of Ukrainian ultra-nationalists as being part of a noble fight for Ukrainian sovereignty.

New pipelines begin supplying fresh water to Crimea, Sputnik News, April 4, 2015
‘Russian geologists have tapped a fresh water supply in Crimea which will allow for the delivery of water throughout the peninsula via new pipelines. The Russian Defense Ministry has sought to provide Crimea with more water since Ukraine’s new authorities blocked access one year ago.’

Crimea: Do Amnesty International claims of ‘climate of fear’ in Crimea have any basis?, by Alexei Timofeichev, in Russia Beyond The Headlines, March 24, 2015

This article appeared also appeared in Counterpunch and in Russia Insider, on April 7, 2015. Roger Annis is an editor of the website New Cold War.org. He visited and reported from Crimea in July 2014. View here the wealth of articles and analysis of Crimea compiled on the ‘Crimea’ page of the New Cold War.org website.