A Precision Strike on US Credibility – Shattering a US Paradigm 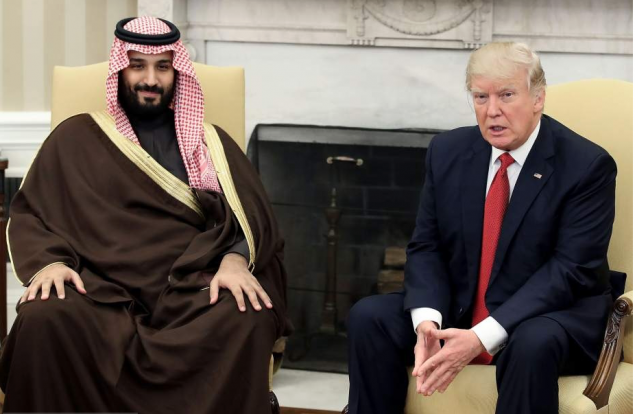 Gulf States will be pursing their lips as they consider now their own vulnerabilities and question their reliance on that US umbrella. Even the Pentagon might be questioning, ‘what then – is the point to CentCom’ in light of what has happened? And above all, Israel will be experiencing a very chill wind sending shivers up the spine: Israelis cannot but be a tad struck in awe at the attack’s precise targeting and technical efficacy. Quite impressive – especially given that Saudi spent $65 billion on weaponry last year, to no good avail.

The precision attack on the Saudi ‘jewel in the crown’, crude-processing installation last week, is also a precision assault on Saudi credibility, on the believability of the US security ‘umbrella’, and a humiliation for Trump, and particularly to America’s image as a competent military and intelligence power.

Gulf States will be pursing their lips as they consider now their own vulnerabilities and question their reliance on that US umbrella. Even the Pentagon might be questioning, ‘what then – is the point to CentCom’ in light of what has happened? And above all, Israel will be experiencing a very chill wind sending shivers up the spine: Israelis cannot but be a tad struck in awe at the attack’s precise targeting and technical efficacy. Quite impressive – especially given that Saudi spent $65 billion on weaponry last year, to no good avail.

Facing this humiliation, the US Administration has been ‘blowing smoke’: tossing around red-herrings about the origin and launch of the UAVs and cruise missiles. ‘It can’t be AnsarAllah (the Houthis), because such an operation was sophisticated beyond their capabilities’. Apart from the obvious Orientalism to this assertion (for, if Hizbullah can manufacture smart drones and smart cruise missiles, why shouldn’t the Houthis be able so to do?), do the exact, individual contributions towards the strike on Abqaiq really matter? What is most telling is that the US – with all its massive resources in the Gulf – cannot provide the evidence from whence came these UAVs to Abqaiq.

Actually, the ambiguity about the strike modus operandi represents just another layer to the sophistication of the attack.

The US is ‘blowing smoke’ about launch sites mainly to divert from the very obvious (but embarrassing) fact that the raining down of missiles on Abqaiq, primordially owes to the Saudi war on Yemen (supported unreservedly by Trump). The Houthis have claimed the attack; they say they will demonstrate their weaponry (which certainly in the case of the Houthi Quds 1 cruise missile is no mere copy of the Iranian Soumar missile – see here), and promise to repeat their attacks in the near future.

What the precision strike has done is to shatter the ‘vessel’ of the US posing as somehow ‘guardian’ of the Gulf, and guarantor of the crude oil lifeblood feeding into the veins of a fragile world economy. This to say, it was a precision strike aimed at the prevailing paradigm – and it scored a direct hit. It exposed the hollowness of both claims. Anthony Cordesman writes, “the strikes on Saudi Arabia provide a clear strategic warning that the US era of air supremacy in the Gulf, and the near US monopoly on precision strike capability, is rapidly fading”.

Were the Iranians directly or indirectly involved? Well … it doesn’t really matter. To understand the implications properly, it should be understood as somehow a joint message – coming from a common front (Iran, Syria, Hizbullah, Hash’d a-Shaibi and the Houthis). This was about blasting the wider sanctions crisis to a head: a strategic (missile) popping of the over-inflated ‘balloon’ of the efficacy of US “maximum pressure” tactics. Trump’s ‘sanctioning/tariffing the world’ had to be brought to a head – and be exploded. Russia and China would almost certainly concur, and (quietly) applaud.

There are clear risks to this approach. Will the message be heard correctly in Washington? For, as Gareth Porter points out in a different context, Washington’s ability to comprehend, or to ‘read well’, its ‘enemies’ mind seems to have been somehow lost – out of a failure in Washington to discover any strain of empathy towards ‘otherness’ (either Iranian, Chinese or Russian). So the prospects, probably, are not great. Washington will not ‘get it’, but rather, may double-down, with potentially disastrous consequences. Porter writes:

The Abqaiq strike is also a dramatic demonstration of Iran’s ability to surprise the United States strategically, [thus] upsetting its political-military plans. Iran has spent the last two decades preparing for an eventual confrontation with the United States, and the result is a new generation of drones and cruise missiles that give Iran the ability to counter far more effectively any US effort to destroy its military assets and to target US bases across the Middle East.

The United States was apparently taken by surprise when Iran shot down a high-altitude … surveillance drone … Iran’s air defence system has been continually upgraded, beginning with the Russian S-300 system it received in 2016. Iran also just unveiled in 2019 its Bavar-373 air defence system, which it regards as closer to the Russian S-400 system coveted by India and Turkey – than to the S-300 system.

Then there is Iran’s development of a fleet of military drones, which has prompted one analyst to call Iran a ‘drone superpower’. Its drone accomplishments reportedly include the Shahed-171 “stealth drone” with precision-guided missiles, and the Shahed-129, which it reverse-engineered from the US Sentinel RQ-170 and the MQ-1 Predator” [emphasis & link added].

Understanding Porter’s message represents the key to comprehending the nature of the ‘Great Shift’ taking place in the region. Robot planes and drones – simply – have changed the calculus of war. The old verities no longer hold – there is no simple US military solution to Iran.

An US attack on Iran will bring only a firm Iranian response – and escalation. A full US invasion – as in the 2003 invasion of Iraq – is no longer within US capabilities.

There is only a political answer. But for now, the US and MbS both, are in a stage of denial: the latter apparently believes that continuing with the partial sale of Aramco might solve his problems (though markets have just re-awoken to geo-political risk to assets, such as Aramco), and Trump seems still to believe that maximum pressure might still come up trumps.

For the rest of us, ‘the political’ is pretty obvious for Saudi Arabia: Accept defeat in Yemen, and with it, its corollary – engaging with Iran and Russia is a sine qua non for achieving any settlement. For sure it will be costly for MbS, both politically and financially. But what is the alternative? Wait upon further Abqaiqs? To be fair, there are reports that the al-Saud understand their situation now to be existential. We shall see.

And for Trump, the lesson surely is clear. The strike on Abqaiq could have been easily worse (with greater interruption to oil supplies). Oil markets and markets more generally have woken up to the geo-political risks to Trump’s maximum pressure tactics. And they are becoming nervous, as world trade falters.

Headlines such as “Stunning weekend attacks take out 50% of Saudi Arabia’s oil output … Can the economy survive a higher oil price…?” may be a bit too alarmist, but they make the point: Supply disruption could easily tip the fragile US and the global economy into recession, were higher prices to be sustained.

No one is more aware of this than President Trump because his re-election chances in 2020 may hinge on whether the US can stay out of recession. Generally speaking, US Presidents who seek a second term are always re-elected, unless they have a recession late in their first term. This happened to Jimmy Carter and George H.W. Bush – both lost re-election bids because of recessions on their watches.

Already both Saudi Arabia and Trump are rowing back from a possible (diversionary) confrontation with Iran (in lieu of addressing the Yemen issue, which remains at the root of Saudi’s difficulties). The question is how long denial over the flaws to the maximum-pressure Iran policy might continue? Up to the elections? Probably yes. Trump has some constituency egos he must stroke – in parallel to avoiding the potentially fatal landmine of recession – if he is to gain a second term. And that means pandering to the Evangelical and AIPAC obsession with Iran as our era’s ‘cosmic evil’ – one positive ‘straw in the wind’ might be the end to the Netanyahu reign (although Gantz is no Iran ‘dove’).