A New Battle For Tripoli: Haftar’s Blitzkrieg Is Turning Into Prolonged Siege 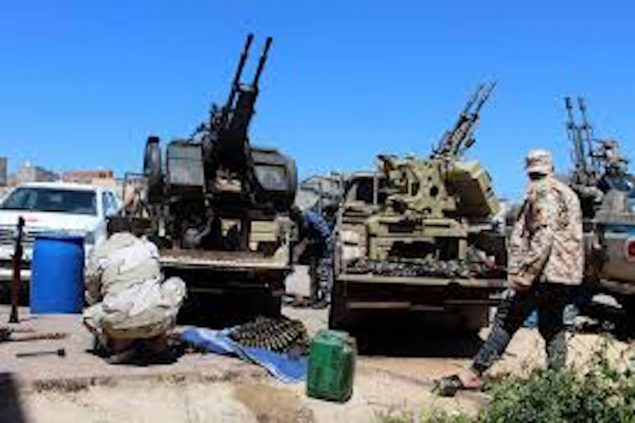 Militants stand on gun-mounted vehicles as they prepare to move to the frontline to join forces loyal to the UN-backed unity government, in Tripoli. EPA-EFE/Stringer

The latest piece from South Font on what’s been happening in Libya recently.

During the last 3 days, intense clashes were ongoing between militias loyal to the  Libyan Government of National Accord (GNA) and the Libyan National Army  (LNA) south of the capital of Tripoli and in several  coastal areas. Pro-GNA factions concentrated most of their best forces and efforts in  the area of Tripoli International Airport. By April 10, they had recaptured  most of the airport and the town of Swani from the LNA and advanced  further to the south entering Al-Aziiziyah. This counter-attack was led  by the Tripoli Protection Forces and Misrata militias. According to pro-GNA sources, they have captured 34 LNA service members  with their vehicles and destroyed at least one LNA battle tank.

Some experts also expected the GNA forces to exploit  the overextended LNA supply lines from the area of Benghazi in  order to carry out raids in the rear of the advancing LNA force.  Al-Qaryat and al-Shwayrif were noted as obvious targets. However, no  military activity of this kind has taken place. Most likely, the reason is  a lack of coordination among the pro-GNA forces, which are more like independent  factions fighting for influence than a monolithic armed force.

In their own turn, the LNA exploited the GNA focus on the airport area by  advancing on other fronts. In particular, LNA units entered Ayn Zara  capturing several military facilities belonging to pro-GNA forces.  Controlling Qasir Ibn Gsher and advancing along the road towards  Tripoli, the LNA is in fact threatening to cut off the GNA force  deployed near al-Aziziyah. Another direction of the LNA advance is the  coastal area to the east of Tajura. The goal is to isolate Tripoli from  its allies in Misrata. However, no significant progress has been  achieved in this field.

At the same time, LNA units advanced near the  GNA-held town of Sirte attempting to cut off communications between it  and Misrata. The situation in the area remains unclear.

Both sides continue to use their existing air forces to deliver strikes on each other. The LNA Air Force recently bombed Tripoli’s Mitiga  airport while GNA warplanes attacked LNA forces near Sirte.

The recent developments show that the LNA has an advantage over its  pro-GNA rivals in terms of maneuverability and coordination, which it  successfully exploits. Despite this, pro-GNA militias are a  well-equipped force that has no shortage of supplies and even has  an advantage in manpower at some parts of the frontline. In some  scenarios, the LNA advance on Tripoli, which started like a kind of  blitzkrieg, may turn into a prolonged siege with shaky chances of taking control of Tripoli anytime soon.