A letter to Mama, who died from the shelling

‘I am convinced that this letter is a symbol of this mindless and merciless war.’

The following is a statement by Rimma Fil, Coordinator of the Humanitarian Headquarters of the Rinat Akhmetov Foundation, which is based in central Ukraine. The statement was published on June 22, 2015 in the Ukrainian news outlet Segodnya.ua under the headline, ‘Curse this war!‘ The English translation appeared on Live Leak.com on July 27, 2015. 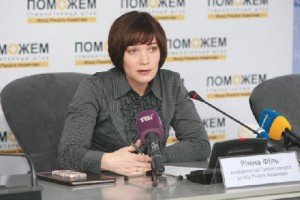 Rimma Fil, a coordinator of the Rinat Akhmetov Foundation of Ukraine

When they say that now is not a time for the weak, when I hear the slightest justification for wa­­r, I think about the wounded children. About little Milanka from Mariupol, Vanechka from Donetsk, Vladik from Avdeyevka. I cannot understand, accept or forgive war.

And when I see happy families in Kiev parks, I can’t help but think that something’s not right with their happiness. At the subconscious level, you feel something false and artificial about it. It should not happen while at the same moment, in the same country, less than 500 miles from here, peaceful people are being killed.

For a year now, in the Humanitarian Headquarters of the Rinat Akhmetov Foundation we have been living in a maelstrom of woe and tragedy. Our life is cries for help replaced by the silent whispers of despair. We live in the long lists of medications for those injured in the shelling, and in the lines of elderly waiting for humanitarian aid, delivered at great risk to the drivers. We have seen a lot this year.

Several days ago, our psychologists, who deal with the trauma of war near the frontlines, sent to our headquarters a letter by a 13-year-old girl living in the city of Makeevka [east of Donetsk city, in the Donetsk People’s Republic]. Due to ethical considerations, I will not say her name. She’s had enough without that.

I am convinced that this letter is a symbol of this mindless and merciless war. Read it, don’t turn away from it, don’t cover your eyes. And don’t think that such a thing cannot happen. Read it, and curse this war.

* * *
A letter to Mama, who died from the shelling, by a girl from Makeeva (Makiivka):

My Mamochka, my most beloved, the most beautiful, thoughtful, sometimes strict. I did not count the moments when you were next to me. You simply were, and you gave joy and love. But somehow I never noticed it, and simply lived under your wing, without cares and troubles. Only now do I note each moment without you, and all my thoughts come back to you. You became so close and yet so far in one moment, in one instant. Even now, I cannot believe that a grocery trip can be so fatal, that the shell chose you. War came so unexpectedly. We all heard the explosions, saw the flashes of weapons, trembled and hid in the basements, but it all felt distant – this cannot be, this isn’t actually happening to me and my relatives.

Why you? The best, the dearest, you who were always against war? I need you. I don’t know how to live any longer, I don’t know where to find support, how to wash away this pain …

Babushka [granma] has “darkened” from grief, and has closed herself to everyone. It is very hard for her to take care of me, and I don’t trouble her. She says that we won’t survive just on her pension, and I am not receiving any money since the country is no longer. I feel guilty for being “dumped” on her.

The world has become so colorless and sad. If not for my cousin Anya, I would just sit on my bed and look at pictures of you. She and Aunt Natasha have moved in with us for a short period and constantly engage me, forcing me to do something, play, help with cooking. Mamulechka, I am so guilty before you. I didn’t help you, sometimes didn’t listen, I argued. If everything could be returned as it was, I would be the best helper, the most obedient, responsive, hard-working. Why do we lose what is most precious?

It’s been six months already since the last time there was shelling in our area. I go to school, my classmates support me, but it is unbearable to think that we have to keep going to the cemetery. I am afraid of the cemetery and everything related to funerals. This is where death is, and it takes you away from me over and over. I feel the pain again and again, and I see it in my dreams, so often. I don’t want to see it. In my dreams you are next to me, and you embrace and kiss me, like before, on the cheek, and play with my hair.

I have decided to study well, so after 9th grade I can go to medical college and become an emergency nurse. I won’t be afraid to run to a wounded person under fire, even if the car stops far away. That could be someone’s Mama and I will be on time to help her. Just minutes of human terror cost you your life. I will be strong and bold. I’ll stop being a burden. I’ll start to support Babushka.

Curse this war! It took away from me the most precious and close thing – you, my Mama. And although each instant you are in my thoughts, I still want to embrace you, kiss you, place my head on your lap. I so love you, Mama!”