A faith that lifts barricades: The Ukraine government bows to peace procession to Kyiv, the ultra-nationalists are furious

By Erwan Castel, published on his French-language blog Donbass ! on July 27, 2016, translated to English by New Cold War.org. 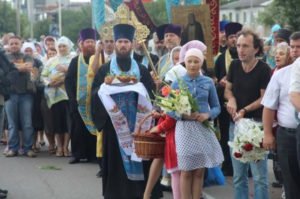 Cross-Ukraine Procession for Peace by Orthodox Church arrives in Kyiv on July 26, 2016 (Rusvesna)

Whether you are Christian, or pagan like me, it’s hard not to be impressed and moved by the quiet crowds of Orthodox faith pilgrims who entered Kyiv on July 26 to the sound and rhythms of sacred songs, transmitted through the generations in the shadows of the golden domes of the Orthodox tradition of this Slavic people that has been living for centuries along the banks of the Dnieper River.

Departing from the east and the west of Ukraine in early July, tens of thousands of Orthodox pilgrims gathered in Kyiv on July 26 and 27 with messages of peace and hope for their country ravaged by civil war for the past two-plus years. United Nations estimates say close to 10,000 people in the Donbass region in eastern Ukraine have been killed, but the real number is higher. Tens of thousands have been injured and hundreds of thousands have been displaced or made refugee. There has been massive destruction of property and infrastructure. 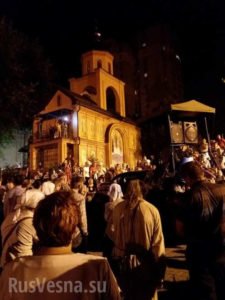 The peace initiative undertaken by the Ukrainian Orthodox Church of the Moscow Patriarchate (UOC-MP) has right from the start been sharply criticized and attacked by Ukrainian nationalists, who saw the processions as subversion orchestrated by Moscow and menacing to Ukrainian authorities. Paramilitary nationalist groups escalated their threats against the initiative, seeking to exacerbate the religious dimension of the conflict in eastern Ukraine with provocations that were as delusional as they were ineffective.

On July 26, ultra-nationalists were incapable of stopping the waves of pilgrims converging by the tens of thousands on the Kyiv Pechersk Lavra (Kyiv Monastery of Caves) on Vladimir Hill, not far from the western bank of the Dnieper River and not so far from Maidan Square in the center of the city. They tried in vain to block the procession from entering Kyiv, including with the complicity of the Ministry of Interior which evoked alleged security reasons to ban the procession from doing so. 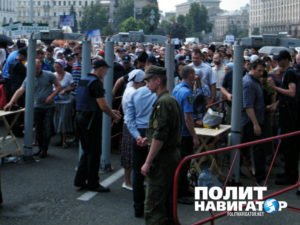 On July 27, tens of thousands of Kyiv residents join the many thousands who made the pilgrimage for peace to the city from across Ukraine om July 2016

The effort to block the procession was in vain. In the early evening of July 26, the pilgrims came into the city in waves, under the stunned eyes of police who could only bow before the quiet strength of the crowds, carried by a faith forged over centuries and by a communion strengthened by the hundreds of kilometers traveled by foot during the previous three weeks.

Not only did the pilgrims succeed in passing through the gates of ‘Kievan Rus'[1], they were joined by thousands more people in the city, come to express their faith in Orthodox traditions or to support the message of peace carried by the tens of thousands of marchers

Suddenly, the Kyiv regime was up against the wall created by its stupid and fanatic Russophobia. It was obliged not only to back off in the face of this expression of Russian-Ukrainian tradition but it was also obliged to ensure the safety of the crowds against its own pack-dogs of the Right Sector and other extremists.

On the morning of the July 27, Interior Minister Arsen Avakov announced, “Special arrangements have been made to ensure the smooth running of the religious ceremony to take place. Any citizen may attend the prayer service and their security will be assured.”

Avakov’s advisor, Zorian Shkiryak, placed in charge of organizing security measures and scrambling to impose a semblance of authority, announced that “access to Vladimir Hill will take place through the appropriate security controls, which will include about 20 metal detection frames.”

With regard to the furious ultra-nationalists seeing all their attempts to sabotage the procession fail, Shkiryak asked them “in all cases not to get into confrontations or to instigate potential conflicts.”
On the evening of July 26, buses which the Diocese of Odessa, like many other dioceses in the country, had organized to allow pilgrims to reach Kyiv for the ceremony were stopped by the radical nationalists as they were leaving Odessa. The fanatics turned back the buses, threatening to burn the pilgrims and their drivers if they continued on their way!

Regardless of outcome, in this Orthodox Procession for Peace undertaking, the Kyiv government has once again stood out for its incompetence, cowardice and stupidity. From beginning to end, the Kyiv puppets were unable to handle this event which was obviously destined to make headlines.

Indeed, instead of saluting the message of peace carried by the marchers and capitalizing on the event in its own way, the government opted to feign indifference, leaving radical nationalist organizations with the opportunity to vent their hatred. But the incompetent Maidan fools were doubly trapped; firstly by the organization and the importance of the event, ensuring its success and media coverage; and secondly by the delusions and threats of the ultra-nationalists, which obliged Ukrainian security forces to provide security for what were termed “Russian spetsnaz (agents)” disguised as pilgrims!

The Kiev regime ended up in a complete dead end in this situation, up to and including its president, the billionaire Poroshenko. He left the city on July 25 for his private palace in Malaga, conspicuous by his contemptuous absence and cowardice, all the while as Kyiv’s artillery continues to pound away at Donbass.

Note:
[1] Cross-Ukraine processions of the Ukrainian Orthodox Church are held each year to commemorate the baptism of the state of ‘Kievan Rus’ (as Ukraine’s early incarnation as a country is known) by Grand Prince Vladimir Volodymyr in the year 988. This year’s procession took on a specific theme of peace and unity for