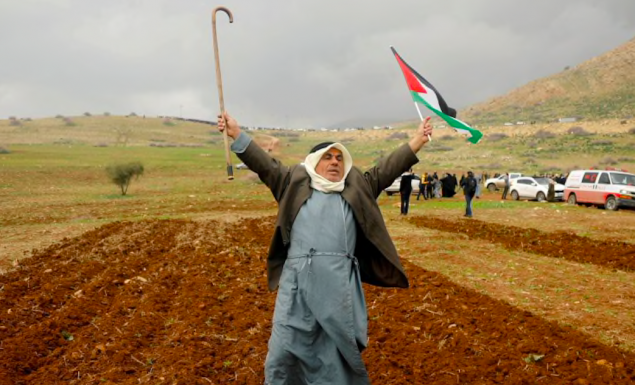 A demonstrator holds up a cane and a Palestinian flag during a protest against the U.S. president Donald Trump’s Middle East peace plan, in Jordan Valley in the West Bank, January 29, 2020. RANEEN SAWAFTA/ REUTERS

In a flimsy hospital gown, injured, barefoot and confused, without food or water, with a catheter attached and wearing a diaper, Gaza resident Omar Abu Jeriban was tossed on the side of the road on June 13, 2008 and left to die. Chaim Levinson reported the story in Haaretz at the time, David Grossman was appalled by it.

In 2008 it was a human tragedy; two days ago, it was a national tragedy: The White House declared the start of the third Nakba. The Palestinians were tossed by the side of the road and abandoned to their fate. Right-wing Israel is delighted, left-wing Israel is lost as usual, and the world is silent. It’s the end of the world.

The White House looked like Habayit Hayehudi the other day, awash in kippot and Yiddishkeit. Does one have to be an anti-Semite to wonder about this? With all the wheeler-dealer peacemakers – all these Friedmans, Adelsons, Greenblatts, Kushners and Berkowitzes, these supposedly fair and unbiased mediators, it’s impossible to even think about the start of a fair accord.

It’s not hard to guess what goes through the mind of every Palestinian and every seeker of justice at the sight of this all-Jewish and all-right-wing class picture. But the Palestinians weren’t just missing entirely from the ceremony, they were also nowhere to be found in the plan that could seal their future and that heralds the elimination of their last chance for some belated decency, for a bit of justice, for a drop of compassion. They were left bleeding on the side of the road.

This is their third Nakba. After losing most of their land, property and dignity in the first and their liberty in the second, now comes the third to crush whatever is left of their hope. They’ve tried everything. Diplomatic struggle and armed struggle, nonviolent protest and economic boycott. Nothing has helped. The ‘deal of the century’ only reconfirms what was known: The evil thrive, this time in a particularly extreme edition of one-sidedness, racism and arrogance. The mighty take all. All. The Palestinians get a caricature of an independent state after many years, if ever, and only as long as they agree to a series of degrading surrender conditions that even the lowest collaborator would never agree to. Israel, on the other hand, gets almost everything, and right away.

Why do only the Palestinians have to prove themselves before they get anything? Has Israel proven itself in the half-century of occupation? Has it obeyed international law at all? Has it heeded the international community? Should there be a prize for the brutal occupier? For the settlers? For what, and why, America?