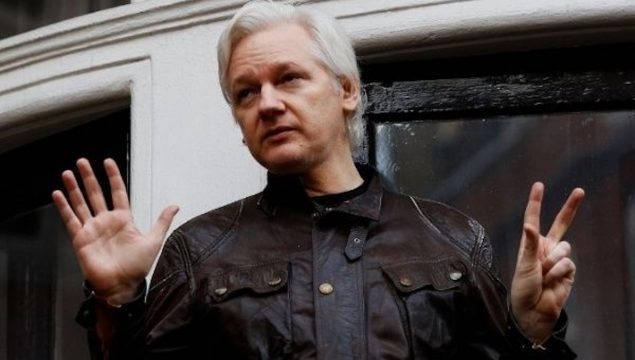 WikiLeaks founder Julian Assange was seen on the balcony of the Ecuadorian Embassy in London. | Photo: Reuters

Julian Assange has been given a prestigious journalism award by the EU – one that is presented to individuals for “uncovering the truth and exposing it to the public” and to honor those “intimidated and/or persecuted” for such actions. This story is from TeleSur but the first newspaper to make the story public was in Australia. At the time of posting this, most of the national British and US media have yet to cover the story – apart from RT and some regional UK websites.

Julian Assange has been awarded the 2019 European United Left-Nordic Green Left Award for Journalists, Whistleblowers and Defenders of the Right to Information, WikiLeaks informed Tuesday.

The award is given to individuals “uncovering the truth and exposing it to the public” and to honor “individuals or groups who have been intimidated and/or persecuted” for such actions. Thus recognizing Assange’s work through WikiLeaks.

The prize is sponsored by European left-wing parliamentarians, who devised it in 2018 in honor of assassinated Maltese journalist Daphne Galizia. Nobel Peace prize winner (1976), Mairead Maguire, received it on Assange’s behalf at an event in the European Parliament in France.

Assange is a multi-award winning journalist, with more than 15 international recognitions for his work. The most outstanding awards are the 2008 New Media Award from The Economist, 2010 Time Person of the Year (Reader’s Choice), 2009 Amnesty International UK Media Award, among others. Something his defense has repeatedly explained since by being a publisher and journalist, U.S. imprisonment would mean the violation of fundamental freedom of expression rights.

“The warning is explicit towards journalists. What happened to the founder and editor of WikiLeaks can happen to you in a newspaper, you in a TV studio, you on the radio, you running a podcast,” said award-winning journalist John Pilger writing in an op-ed for teleSUR.

On April 11, Assange’s even-year asylum was abruptly removed and then arrestedby British police. Immediately the U.S. charged him with “computer hacking conspiracy,” over an allegation he conspired with former army intelligence analyst Chelsea Manning to break into a classified government computer.

Ecuador’s President Lenin Moreno even tried to minimize the actions by saying he was “miserable hacker.” Now his defense is fighting an extradition request to face the U.S. justice system, even though Ecuadorean officials have assured this will not happen.