Vladimir Putin’s comments on V.I. Lenin and the Russian Revolution of 1917

The following is an excerpt of a speech by Russian President Vladimir Putin on the subject of the Russian Revolution of 1917 and its central leader, Vladimir Ilyich Lenin, specifically on the nationalities policies of Lenin and the governments he led. The speech was delivered on January 25, 2016 to a plenary session of an interregional forum of the Russian Popular Front [All-Russia People’s Front-Wikipedia] public movement. The excerpt (below) is from the full speech as published on the website of the President of Russia. 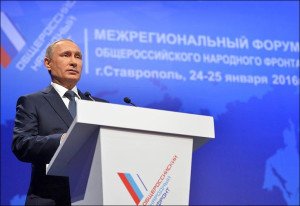 The comments by Putin on January 25 followed the controversy stirred by comments he made on January 22 to a meeting of the Presidential Council on Science. There, he cited a line from a poem about Lenin, saying the revolutionary leader and other leaders of the Russian Revolution had “planted an atomic bomb under the structure called Russia, and it then exploded”.

The president was referring to the controversy and debate in the early Soviet Union over nationalities policy, specifically the divergences between Lenin (who died in January 1924 and was gravely ill for more than one year before that) and future Soviet leader Joseph Stalin over the right of nationalities in Russia to political self-determination, including full independence.[1] Here is how RT.com reports the controversy, on Jan 26, 2016:

Putin said that he had been referring to an iconic debate between Lenin and Joseph Stalin, when the two revolutionary leaders were arguing about the best way to organize the new communist country. While Stalin suggested offering the Soviet Union’s member states, such as Russia, Ukraine, Belarus and the south of Russia, autonomy within a federation, Lenin disapproved and put forward a plan giving each republic the right to secede from the USSR.

“With that, the borders were being defined absolutely arbitrary and far from always based on reason. Donbass, for example, was transferred to Ukraine under the following pretext: to increase the percentage of proletariat in Ukraine in order to obtain stronger social support there. This is nonsense,” Putin elaborated.

“That was the time bomb under the structure of our state system,” Putin said, adding that history should be carefully analyzed so as not to repeat the mistakes of the past. Noting that he really liked and still sympathizes with some communist and socialist ideas, Putin added that the rule book of those who built communism could be compared to the Bible: “There are some very good ideas, [including] equality, brotherhood and happiness.”

He pointed out that, in practice, however, the reality turned out quite differently than that which had been planned.

… Regarding the assessment of the brief discussion we had at the Council for Science and Education, what was it all about? Generally, if you want to know my opinion, you know that like millions of Soviet citizens – over 20 million – I used to be a member of the CPSU (Communist Party of the Soviet Union), and not just a regular member: for almost 20 years I worked for the organisation called the Committee for State Security of the Soviet Union [KGB]. This organisation derives from the Cheka [Extraordinary Commission for Combating Counter-Revolution and Sabotage], which was then called the armed unit of the Party. If for some reason a person left the Communist Party, they were immediately fired from the KGB. I did not join the party simply because I had to, though I cannot say I was such a dedicated communist, but I treated this with great care. As opposed to numerous party functionaries, I was not one of them; I was a rank-and-file member. As opposed to many functionaries, I did not trash my membership card, I did not burn it. I would not want to criticize anyone now – people had different motives and this is their own business. The Communist Party of the Soviet Union fell apart; my membership card is still out there somewhere.

I have always liked communist and socialist ideas. If we consider the Code of the Builder of Communism that was widely published in the Soviet Union, it strongly resembles the Bible. This is not a joke; it was actually an excerpt from the Bible. It spoke of good things: equality, fraternity, happiness. However, the practical implementation of these ideals in this country had little in common with what the utopian socialists Saint-Simon or Owen spoke about. This country had little resemblance to their Sun City.

Everyone accused the tsarist regime of repressions. However, what did Soviet power begin with? With mass repressions. I will not speak of the scale, but will simply give most outstanding example: the execution of the Tsar’s family together with their children. There could have been some ideological grounds to destroy possible heirs, I suppose. But why did they have to kill Doctor Botkin? Why kill the servants – people of a proletarian background? What for? To cover up the crime.

You see, we never gave this a thought before. Fine, we fought with people who resisted Soviet power with arms in hands, but why kill priests? In 1918 alone 3,000 priests were shot, 10,000 over a period of 10 years. Hundreds were drowned under the ice of the Don River. When you think about it, and when you get new data, you tend to see things in a different light.

In one of his letters, to Molotov I believe, Vladimir Lenin wrote that ‘the more representatives of the bourgeoisie and the clergy we shoot – the better’; I do not remember the exact words now. You know, this approach does not go very well with some of the ideas we used to have about the very nature of power.

We also know of the role the Bolshevik Communist Party played in the collapse of the World War I frontlines. The fact that we lost to a losing nation – several months later Germany capitulated, and were losing the war to a losing nation – was a situation unique in history. Why was this done? To gain power. Knowing this, how should we assess this situation now, with the huge, colossal losses the country had to bear?

I believe that if it were not for the concentration of national resources, the Soviet Union would not have been able to prepare for the war with Nazi Germany. The chances of being defeated in this war would have been great, with catastrophic consequences for our statehood, for the Russian people and for all the peoples of the Soviet Union. Therefore, those are all obvious achievements. However, in the final count, the inability to embrace change, to embrace technical revolutions and new technology led to a collapse of that economy.

Finally, the main reason why I was saying that we need to take a fresh look at the ideas the former leader of the Soviet state Vladimir Lenin formulated. What were we talking about? I was saying that a bomb was planted at the foundation of our statehood. What did I mean by that? I will give you the details now. I was referring to the discussion between Stalin and Lenin regarding the creation of the new state, the Soviet Union.

If you are a historian, you should know that back then Stalin came up with the idea of the autonomisation of the future Soviet Union. Pursuant to this idea, all the different subjects of the future state were to join the USSR as autonomies with broad authority. Lenin criticised Stalin’s views, saying it was an untimely and wrong idea. Moreover, he promoted the idea of uniting the future entities, and there were 4 then – Russia, Ukraine, Belorussia and, as a matter of fact, the south of Russia, the North Caucasus Federation, as it was called – you know this better than I do.

So, Lenin said the state, the Soviet Union should be formed on the basis of full equality with the possibility of seceding from the union – I may have gotten the exact words wrong, but that was the idea. That was the time bomb that was planted under the structure of our statehood. Not only did they set the borders for ethnic groups of a multinational, essentially unitarian state; the borders were also established arbitrarily, without much reason. Thus, why did they make Donbass part of Ukraine? The reason was to raise the share of the proletariat there to ensure greater social support. Pure nonsense, as you may see. And this is not the only example, there are many others.

Say, cultural autonomy is one thing, an autonomy with broad state authority is another, while the right to secede is something else altogether. Eventually, this, along with an inefficient economic and social policy, led to the collapse of the state. This was the time bomb.

What was it if not a time bomb? That is exactly what it was. We simply need to carefully analyse what happened in the past using the opportunities we have today. However, we cannot paint everything in the past black, or present a rosy picture of everything that is happening now. We need to make a careful objective analysis to avoid the mistakes that were made and develop our statehood, our economy and social sphere in a way that would only make the state stronger. We have such an opportunity, and the Russian Popular Front has a part to play here as well…

Note by New Cold War.org editor:
[1] Two books in English on the nationalities policy of the governments of Russia and the Soviet Union in the early years following the Russian Revolution of 1917 are: