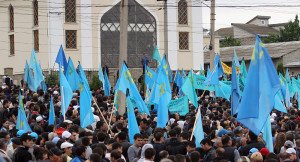 Meeting in Simeropol, the second congress of the Kyrym (Crimea) Movement[1] has declared that the ‘Mejlis’ does not speak on behalf of Crimean Tatar people. The decision was taken on December 19, RIA Novosti reports.

“The regressive actions by Mustafa Dzhemilev and Refat Chubarov to cooperate with extremist groups in Ukraine deprive them of their right to represent the Crimean Tatar people. Henceforth, progressive people around the world should consider any speeches by the two as being individual pronouncements only,” the congress said in a resolution adopted at the end of its meeting.

The envoy to Crimea of Russian President Vladimir Putin, Oleg Belavenets, told the congress that the Russian government considers the interests of the Crimean Tatar people to be represented by the interregional public movements represented in the Crimea Movement, TASS reports.

The leader of the Kyrym Movement and vice-speaker of the Crimean parliament, Remzi Ilyasov, said the movement will seek international condemnation of the blockade of Crimea. Ilyasov intends to make a proposal to the State Council of Crimea. “First we had disruptions to water supply from Ukraine and to travel, then a food and transport blockade to starve us, and now an electricity blockade. These are obviously efforts to destroy us,” said Ilyasov. 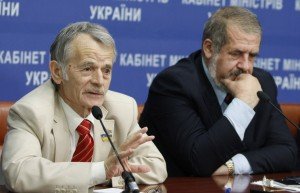 The leaders of the Mejlis of the Crimean Tatars (which is not registered as a civic organization Crimea as required by Russian law)–members of the Ukrainian Parliament Mustafa Dzhemilev and Refat Chubarov–as well as the former deputy prime minister of Crimea and owner of the ATR media group, Lenur Islyamov, have supported the food-transport blockade of Crimea begun on September 20 by the ‘Right Sector’ extremist group. On December 16, the Ukrainian government endorsed the food blockade and announced an end to all trade with Crimea beginning in January 2016.

Representatives of the Mejlis and the Right Sector also blocked maintenance crews in Ukraine from repairing the emergency pylons blown up in the Kherson region on November 20 and 21, 2015. Crimea lost its energy supply temporarily as a result of that action.

Ten days later, Russian President Vladimir Putin opened the first stage of an energy bridge from the Krasnodar region of Russia across the Strait of Kerch to Crimea, adding 230 megawatts of power daily to Crimea’s emergency supply.

SIMFEROPOL–The ‘Mejlis’ of the Crimean Tatar people, which is not registered in Russia, no longer represents the interests of the people. It has been replaced in Crimea by the inter-regional civil movement called the Kyrym Movement, the envoy of the Russian president to the Crimean Federal District, Oleg Belaventsev told the opening of the movement’s second congress on December 19.

“The former leaders of the Mejlis – Mustafa Dzhemilev, Refat Chubarov and Lenur Islyamov – have lost contacts with the people, they became criminals and terrorists,” the envoy said.

He called an act of terror the explosions last month that ripped the electricity grid lines in Ukraine supplying energy to Crimea. “This act of terror has affected the people in Crimea, including the Crimean Tatars,” he said.

Commenting on a recent meeting between Turkey’s President Recep Tayyip Erdogan and Ukrainian MP Mustafa Dzhemilev, Belaventsev said former leaders of the Crimean Mejlis “are abusing the name of the Crimean Tatars.”

“Today, those false leaders want to make terrorists of the Crimean Tatars, announcing the organisation of Crimean Tatar and Muslim paramilitary battalions in Ukraine. They are trying to use the name of their ethnicity to unleash a deadly conflict in Crimea. Who are they fighting against? Their own people?”

On Friday, Turkish Anadolu news agency reported that Mustafa Dzhemilev met with Erdogan. During the meeting, they discussed, among other issues, organizing an armed division to be controlled by the Mejlis and stationed in Ukraine along the border with. No details were available of the division’s objectives.

Crimean authorities claim Dzhemilev and his allies – Ukrainian MP Refat Chubarov and [Ukrainian] Crimea former deputy prime minister Lenur Islyamov – are organisers of the explosions which caused the blackout in Crimea in the early hours of November 22. Criminal proceedings against them are underway.

The Kyrym Movement, which has united major organisations of Crimean Tatars, was formed one year ago as an alternative to the Mejlis, whose leaders had refused to re-register the organization in compliance with the Russian legislation following Crimea’s decision in March 2014 to secede from Ukraine and rejoin the Russian Federation.

Notes by New Cold War.org:
[1] ‘Kyrym’ is a transliteration into English from the Tatar language word for Crimea.

[2] The Crimean Tatar ‘Mejlis’ was a political project created nearly 25 years ago in order to give greater voice to the aspirations of the Crimean Tatar people. It arose in the midst of considerable tensions and difficulties for the Crimean Tatar people to gain recognition of their history, language and culture in the newly independent Ukraine. The Tatar language was never an official language in Ukraine. Ukraine is an officially unilingual country, unlike multilingual Russia. Crimea today has three official languages–Russian, Ukrainian and Tatar. [3] Concerning relations and attitudes of Crimean Tatars towards Turkey, the Crimean Tatar congress that met in Simferopol on December 19, 2015 adopted the following resolution: “The participating delegates denounce the aggressive anti-Russian policy pursued by the Turkish authorities and firmly believe that the friendly people of the Turkish Republic are not responsible for their leaders’ provocative behavior. The Crimean Tatars, together with their Turkish brothers, are looking forward to a speedy resolution of this difficult situation,” the delegates of the Simferopol meeting said in a resolution.” (Report in Sputnik News.)
Editors’ Note: While we don’t necessarily share the views we publish on New Cold War, we do attempt to provide readers with a range of views. This is because your right to make your own mind up depends on your being fully informed.
Share
Tweet
Share
Pin