Ukraine, when the Right Sector runs the courtroom

In Ukraine there is almost daily right-wing violence against the police and judiciary.

On November 30, 100 members of the Right Sector stormed the Malinowski Court in Odessa. Security officers were simply pushed aside. Masked men and muscular women stood threateningly before the three judges. The judges had approved a ruling to release on bail five people detained since the violent events of May 2, 2014 in the city. 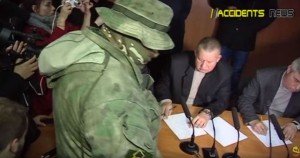 Three judges sign their resignation letters ‘or else’ in Odessa courtroom on Nov 30, 2015

The judges were threatened by masked vigilantes if they didn’t sign letters of resignation. A video report captures the confrontation. It shows the anxious looks on the judges’ faces. They signed the resignation letters and exited the courtroom.

A short time later, the ruling to release the five anti-Maidan protesters was reversed, due, it was said, to “the failure to take account of certain facts”. Their detentions were extended for two months.

Jurisprudence in Odessa is experiencing black days in the month of December. Only five weeks ago, a committee of experts of the Council of Europe issued a lengthy report sharply criticizing the Ukrainian justice system because of the protracted investigation of the events of May 2, 2014 in Odessa. On that day 18 months ago in the city, six people were shot dead by unidentified men on both sides of a street battle between Maidan and anti-Maidan forces. Shortly after on the same day, 42 people died in an arson attack on the Trades Union House in the center of the city where government critics (anti-Maidan) had fled. Not one of the arsonists is in custody. It is not known what stage the investigation into the arson attack has reached. [The full, 91-page report of the Council of Europe is here. News reports are here in English and here in German.]

Kyiv does not want to investigate the tragedy of May 2, 2014. And the Right Sector in Odessa is doing everything to block information and the investigation. The right-wing extremists are even afraid of court cases against their opponents from the anti-Maidan because these could, indeed, reveal that it was the rightists who threw fire bombs that started the fire. That would be most inopportune for the rightists.

The rightists fear that the Ukrainian president Petro Poroshenko will withdraw his protective cover of the Right Sector. Poroshenko is afraid that he will lose control of the increasingly radical Ukrainian nationalists. The Ukrainian prosecutor’s office has even launched an investigation against three leading Svoboda Party members concerning the sniper fire on Maidan Square in February 2014.

Defendant slashes himself in prison in protest over continued detention

The five detainees in Odessa have been imprisoned for one and a half years without any concrete evidence presented against them. They face identically worded accusations. (July 2015 interview with their lawyer, Kirill Shevchuk, here on Telepolis.)

The reversal of the three judges’ decision was a shock. One of the detainees, 32-year-old Evgeny Medvedov (Eugene Mefёdo), slashed his arms in court on December 4 in protest over the decision as it was announced. His relatives had paid the equivalent of $8,500 in bail to the court on November 30.

Under the protection of ten National Guards soldiers, Yevgeny was transferred to a hospital where his gashes were sutured. An eyewitness accompanying him in court said medical staff refused to provide him with drinking water. Following the surgery, Medvedovwas sent back to jail.

The Right Sector had learned of the collection of bail funds for the five detainees. On November 30, vigilante members of the group pre-emptively blocked all the exits of the Odessa prison. None of the five detainees were to see their freedom.

Evgeny Medvedov is one of two of the five activists who holds a Russian passport. His accusation stems from the street battle on the Greek Square in central Odessa earlier on May 2, 2014. Ukrainian media describe him as one of the “Russian agents” behind the violence that day. But as the internet journal in Odessa Timer reported in an interview with Medvedov nearly seven months ago, there is nothing to the spying accusations against him.

Medvedov told Timer that he moved to Odessa from Russia in 2013 in order “live closer to the sea”. In Russia, he had earned his money as a taxi driver, as he did in Odessa. He was present on Greek Square for a short time only but was photographed there. The photos of him serve as evidence that he participated in the violent street battle. But there is no proof of that accusation.

From Greek Square, Medvedov went to the anti-Maidan camp in front of the trade union building to observe the goings on. When the rightists attacked the camp, he took refuge with 300 others in the multi-storey building. Following his detention, as Medvedov told the Timer interview, the Ukrainian secret service (SBU) took him from the hospital where he was being treated for burns to the hand and lung damage and subjected him to three days of interrogation, including conducting a polygraph test. They pressed him, in particular, over allegedly working for a secret service. They even asked whether he was working for the Israeli Mossad.

Medvedov is afraid he will be forgotten. Russian media do not report on his case.

In recent weeks, attacks by the Right Sector against judges and high government officials are piling up all over Ukraine.

But the tragedy of Odessa will not be so easily forgotten. A film festival will take place in Berlin from December 17 to 19 featuring documentary films about the events of May 2, 2014 in Odessa. Titled ‘Democracy in Flames‘, the festival will take place at the Reporter’s Club of the European Media Agency. Six documentary films by Ukrainian, German and Russian film directors will be shown, each of which shed light on the tragedy on May 2, 2014 from different angles.

The aims of the festival are to strengthen the demand for a thorough investigation into who were the perpetrators of the fire in the trade union building in Odessa on May 2, 2014, the circumstances of the people who were detained that day, and the inaction of police and fire departments, and to strengthen demands that the responsible persons be brought before court.

This article was first published on Counterpunch, Dec 18, 2015.

Ulrich Heyden is a German journalist and author. Since 1992, he has been a freelance correspondent in Moscow for German media, including for Telepolis. He is a co-producer of the 45-minute documentary film (sub-titled in English) Wildfire: The Odessa atrocities of May 2, 2014, released in February 2015. The film documents the arson attack on the Trade Union House in Odessa which left 48 people dead on that day. The victims were protesting the coup of February 2014 which brought a right-wing, ultra-nationalist government to power in Kyiv. Ulrich Heyden’s new book was published in May 2015 (in German): War of the oligarchs: The tug of war over Ukraine, published by PapyRossa. He can be reached at [email protected]. His website is http://www.ulrich-heyden.de.