U.S. has a plan if Ukraine collapses

Ukraine is no longer sustainable and no longer a state. It keeps on being a state only to the extent that it is recognized by international players. 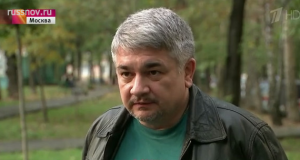 MOSCOW–The president of the Center for System Analysis and Forecasting, Rostislav Ischenko, explains why it better suits the world power-centers to keep Ukraine in its present state in which the power rests among regional elites. He also writes about what sort of plan Washington has in case of the collapse of central government in Ukraine.

In politics, policy outcomes cannot leave off on December 31 and start anew on January 1st. Processes begun earlier will continue in 2016.

If we talk about the stability of the Ukrainian state, it is no longer sustainable and no longer a state. It keeps on being a state only to the extent that it is recognized by international players. For Brussels, Paris and Berlin, it is unprofitable to preserve Ukrainian statehood, but to admit its dissolution/destruction is an even more losing option.

Once we admit its destruction, the question immediately arises, what to do next? The answer is, necessarily, to create something new to replace it. But that would need a clear understanding of how to create, what to create, and what orientation for the new formation. The world’s major players have completely different views on the subject.

If the U.S., the EU and the IMF have not found $3 billion to pay for Ukraine’s debts to Russia, they simply will not find the tens and hundreds of billions of dollars over five to ten years for a new project.

At the same time, everyone understands that the central regime is not sustainable. It isn’t alive anymore; the local elections in Ukraine have shown that the regime cannot compete even with regional elites. In all regions, the elections returned local and regional elites. Therefore, when U.S. Vice President Biden came to Ukraine recently, he said there was no need for further elections, let everything remain as it is.

His words relate to the fact that the politicians of the U.S., who have more education and experience than their Ukrainian counterparts, are well aware that any subsequent elections will lead to the further disintegration of Ukraine, international community notwithstanding. This process can slow down, but it cannot be ignored. Though it may be possible to maintain the integrity of the state with intravenous injections, it is no longer possible to stop and reverse the process of decay.

The spiral is inevitable, although the world’s centers of power can pretend that Ukraine exists as a country, for some time, even if nominally. A state is not just an anthem, a coat of arms, a flag, and international recognition. In essence, it is an internal consensus, and its survival is only possible when the internal power meets the needs of its people. It not only collects taxes; citizens must know that taxes are accomplishing something.

Today’s situation is one where the central government has lost the role it can play in the interests of the whole country while being unable to attract external funding. The economy is in ruins, and making a budget through taxes and fees is impossible. The center has lost its importance for the regions and the process of decay depends only on the uptake of the regional elites and their real and powerful capabilities. As at the time of the crumbling of Kievan Rus, the center only takes, but gives nothing in return.

Though transferring money to Kiev, the regions decide all questions on their own. They protect themselves and solve the problems of the administration. They are even set to enter foreign markets on their own. Why do they need Poroshenko?

The collapse is hampered by two things simultaneously. First, the U.S. interest that controls the Ukrainian government and general policy is one of maintaining a single player, which they can show to the world and say: ‘Here is Ukraine’. Not Odessa, Zaporizhia, Lviv or Zhytomyr, but the whole of Ukraine.

The other is the convulsive rhinestones of the local regional elites in the face of the Americans. The regional elites do not realize that the Americans depend on them to a much greater extent than they depend on the Americans. If Washington is facing a collapse in Ukraine, it will play with Filatov in Dnepropetrovsk, Baloga in Transcarpathia, Saakashvili in Odessa and just forget about Kiev. Of course, it is more profitable to play with Kiev, but that will not change their interests.