The slugfest in Germany over media presentation of Russia

The slugfest in Germany over the highly biased media reporting on all things Russian continues unabated because the mainstream have no good options. Either they back down from their obvious bias and dishonesty, crude even by U.S.-UK standards, thereby admitting defeat and losing the battle and public opinion, or they carry on, alienating the public and getting a black eye in the process.

Calling the media out on their deception has become a national sport in Germany, pursued by dozens of blogs and small alternative websites, whose readership is soaring.  What follows below is an example of what is a daily occurrence in Germany. In this regard, democracy in Germany is much more vital than in the UK, France, or US.  These guys aren’t pulling any punches.

The German headline for this article was: ‘Katrin Eigendorf lies on ZDF’ [German TV]. Originally appeared at Die Propagandaschau (The Propaganda Show) in German. Translated by Kristina Aleshnikova for Russia Insider. 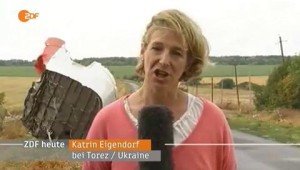 Katrin Eigendorf is known all too well to regular readers of the blog (Die Propagandaschau) for her lies, disinformation and complicity with the Ukrainian fascist brigades. For months, she lied to the camera about the Russian invasion of Ukraine without ever providing a shred of proof.

In the 19.00 Uhr heute-News on Turkey’s downing of the Russian SU-24 in Syria, Eigendorf once again brings pure NATO-propaganda lies into German living rooms.

Eigendorf: “Since the end of September Russia has been flying attack sorties on Syrian rebel positions from the Syrian military base in Latakia.  An internationally controversial mission, since the targets are not only the Islamic State fighters but rather all opponents of the Moscow-supported Assad Regime.”

In fact Russia is fighting only those opponents of the Syrian government who are attacking the legitimate government or its allies with militancy and force of arms. For that matter, Russia has repeatedly prompted the U.S. to name the so-called “moderate rebels” to avoid their territory, as the case may be, or to cooperate with them in the fight against IS and other terrorist groups.

Eigendorf’s lie has its source in the monotonous and duplicitous NATO-propaganda, which bangs out of the synchronized media sources since the start of the Russian operation. They claim that Russia announced it would only tackle IS and is now instead attacking “moderate rebels” or even civilians.

The truth is that the Syrian government and Russia are prepared to meet with all groups who want to work towards a peaceful and democratic future for Syria. (Moscow Consultations, telepolis, DWN, Sputnik, Sputnik). Precisely this is, however, for one particular reason not the goal of the US,. .–its aim is to topple Assad.

The U.S. and Turkey know very well that if regular elections were held, Bashar al-Assad would have very good chance to once again be endorsed as president of the country. That would be the greatest fiasco for the criminals who began the war in Syria and it would expose as such the years of propaganda of the warmongers from ARD to Zeit.