2015 interview with Jill Stein: Part one, her formative years

In February 2015, the Real News Network broadcast a three-part interview with Dr. Jill Stein, presumptive candidate for the Green Party in the 2016 U.S. presidential election. Part one, is here, or on the screen below. It is 20 minutes long. 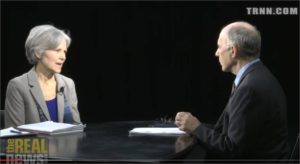 February 2015 interview with Jill Stein on The Real News Network

Jill Stein was born in Chicago in 1950. In the interview, she talks about her formative years growing up in the 1960s and opposing the war in Vietnam. She graduated from Harvard Medical School in 1979 and worked in medical aid projects delivering free medical care to some of the poorest regions of the southern United States.

Stein explains that her political outlook was transformed by her experience in running for governor of Massachusetts for the Green Party in 2010. (She had earlier run for the post in 2002.) It was then, she realized, that winning political power was a prerequisite in order for social progressives to change society. She says she also came to understand that most Americans are progressive in their outlook but are blocked by the electoral system and by corporate media from having their views represented in the established political system. Click the screen below for part one of the interview.

Part two of the interview is here. Part three is here.