July 2, 2015
Report in Russian on ukraina.ru, July 1, 2015, translation by New Cold War.org. Below is a six-minute video of the rally, with English subtitles. 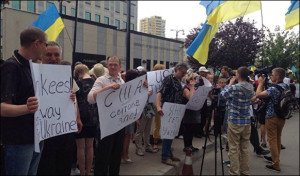 One thousand people in Kyiv have gathered once again before the walls of the U.S. embassy in Kyiv demanding that the U.S. cease interfering in the affairs of Ukraine.

They chanted “USA! Away with your soldiers and weapons. Do not interfere in the internal affairs of Ukraine! Shame! You are causing the war! Yankee, go home!”

Activists held large posters with the words “Obama: You have the blood of the children of Donbass on your hands!” They also held photos of the dead people and ruined cities of the East of Ukraine caused by the war.

“They do not care, they want to dominate, dictate and promote their customs and laws,” said protesters in response to the lack of response by the embassy to their calls. 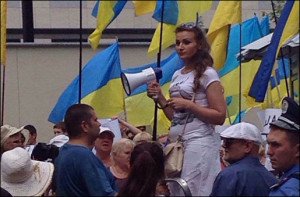 At the end of the event, Svetlana Gritsenko, an activist of ‘Rights? Yes!’ was roughed up by police.*

“It all happened quite quickly, I did not even have time to react. Two policemen came at me from behind, grabbed my hands and said I was going to regret everything. They pushed me onto the grass.

“Have the police sold themselves so much to the current, pro-American government that they are ready to hit a woman who has opposing views?”

Protesters left the rally assuring that actions will continue until the people are heard.

View a six minute video, with English subtitles, of the July 1, 2015 antiwar rally in Kyiv:

View:
A 13-minute video in Russian language of the July 1 antiwar action is here.

Read also:
Large antiwar protest in Kyiv on June 17, 2015
This protest action was organized by many of the same forces that protested on July 1, 2015.