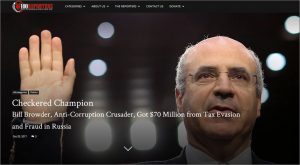 One week ago, the 100 Reporters web news project in the U.S. published a report on the UK citizen and resident financier Bill Browder, he of anti-Russia, ‘Magnitsky Act’ fame in the U.S. and Canada. Reporter Lucy Komisar’s report dated October 20 is titled ‘Checkered champion: Bill Browder, anti-corruption crusader, got $70 million from tax evasion and fraud in Russia’. It frontally challenges the official story that Browder has been delivering to Western governments and media as part of his crusading effort to have Western governments boost economic sanctions against Russia.

Komisar writes, “an examination of Browder’s record in Russia and his testimony in court cases reveals contradictions with his statements to the public and Congress, and raises questions about his motives in attacking corruption in the Kremlin.”

And further, “There is, however, a record that suggests Browder knew well more about suspicious transactions involving the companies he controlled. That record questions the prevalent depiction of Browder as an entrepreneur wronged by a rough-and-tumble Russian business community.”

The report follows an earlier report on Browder’s financial doings by 100 Reporters published in May 2014. (In passing, the 2014 report begins with, “As United States and European governments impose sanctions on bankers, businessmen and officials close to Vladimir Putin to pressure him over Crimea, the asset freezes will lead investigators not to the Kremlin alone, but to the western-built offshore system that has helped the Russian leader and his friends loot their country and consolidate their power.” Yet there is not a whiff of proof offered in the story of how the Russian president and his friends “looted the country”, nor is the accusation related in the slightest to the dossier as written.)

Coincidentally, the Canadian Parliament and Canada’s unelected senate have unanimously approved a ‘Magnitsky Act’ for Canada which targets Russia for further economic sanctions. Bill 226, formally titled ‘Justice for Victims of Corrupt Foreign Officials Act (Sergei Magnitsky Law)’, was approved by the House of Commons on October 4 and by the unelected Senate on October 17. The Canadian law and its U.S. counterpart approved in 2012 are based on Bill Browder’s interpretation of the death in a Russian prison in 2009 of his financial accountant Sergei Magnitsky (who was not a ‘lawyer’ as Browder falsely presents him to be).

Woe betide the journalist or editor in Canada who steps into the swamp of Bill Browder’s life and financial dealings. Yet Canadian mainstream journalism (including the state-run CBC) is up to its forehead and beyond in that swamp. See, for example, today’s editorial (October 27) in the print edition of the Globe and Mail titled ‘Russian reaction makes the case for Magnitsky law’. Or see a typical Browder-as-hero report by Canadian Press published on the CBC website on Oct 23: American-born Putin critic allowed into America, after being temporarily blocked.

The Toronto Star is the rare mainstream news outlets in Canada that has shied away from all-out campaigning on behalf of Bill Browder and his anti-Russia crusade. The rest of the media pack has placed itself on a perilous limb over the Browder story, risking further damage to its reputation already compromised by its relentless, anti-Russia bias and dangerous advocacy in favour of more sanctions and threats against Russia.

I do hope the 100 Reporters exposés cause the media pack to take note and pull back. As for the lame, NDP caucus in the federal Parliament which voted unanimously for the Browder-inspired Bill 226, they are what they are. Their vote in favour of the bill is just one more example in favour of my years-long advocacy of the need in Canada for a new, broad party of the left that would challenge the headlong rush to militarism and war by Western governments.

The controversial New York meeting in June 2016 between President Donald Trump’s campaign team and a group of Russians, initiated as a talk about finding dirt on Hillary Clinton, is drawing new scrutiny of U.S. sanctions against targeted Russians.

That human rights effort, named after a man Russian investigators say was part of a tax evasion scheme, has helped sour US-Russian relations.

At the meeting, Donald Trump Jr. and other Trump confederates, lured by a promise of compromising information on Trump’s rival, instead stumbled upon a quagmire: a fraud that bilked the Russian treasury of $230 million; a trans-Atlantic dispute over offshore accounts and tax evasion, and a U.S.-born investor, William Browder, who once ran the largest foreign investment fund in Russia, and who plays the eminence grise in this drama.

Browder is perhaps best known as an investor in Russia turned an anti-corruption activist, and the driving force behind the Magnitsky Act, the battery of economic sanctions aimed at Russian officials. However, an examination of Browder’s record in Russia and his testimony in court cases reveals contradictions with his statements to the public and Congress, and raises questions about his motives in attacking corruption in the Kremlin.

Browder has insisted that his departure from Russia resulted from his anti-corruption activities. However, Russian authorities revoked his visa in November 2005,  two years after a provincial court convicted Browder of  evading some $40 million in taxes. The Russian federal government next took up the case.  Magnitsky was interrogated in 2006 about the tax evasion and detained over it in 2008.

Nevertheless, by 2012 Browder had convinced key U.S. politicians that Magnitsky was his lawyer, hired to investigate the theft of three of Browder’s companies and jailed by corrupt Russian authorities, who engineered his death in prison. The Magnitsky Act banned visas and business ties for a number of Russians allegedly linked to Magnitsky’s death. The impact of that legislation has spread, with US and European human rights advocates pressing for a global Magnitsky Act against public officials and corporate officers everywhere accused of corruption or rights violations.

That human rights effort, named after a man Russian investigators say was part of a tax evasion scheme, has helped sour US-Russian relations.

Back in the spotlight this summer, Browder used Magnitsky’s death to again rail against shady Russian government officials and their cronies in Congressional testimony and in the press…

Read the full dossier at the original weblink above.