Winter is coming, and so is Ukraine’s far right

An armed, radical threat could tear Ukraine apart before snow falls in Kiev.

Introduction by New Cold War.org: In the following commentary, Foreign Policy magazine ‘discovers’ the existence of a dangerous far-right in Ukraine with lots of guns and no time or interest in hopey talk about ‘European values’ and the like. It has ambitions for political power. Ukraine is facing a deadly threat of toleration and support for the far-right by Poroshenko’s government and its NATO backers, and sharp economic and social decline courtesy of “economic association” with the European Union. Western governments and media are playing a key support role in the deteriorating situation through their silence over the real state of affairs in the country. They regurgitate a non-stop barrage of propaganda about threats to Ukraine coming from Russia and “pro-Russia separatists”.

There’s a reason most revolutions in Eastern Europe begin in the winter, from Russia in 1905 to Ukraine’s Maidan in 2013. Once the cold settles in, a government’s empty promises are laid bare. Over the next several days, forecasters are predicting, the temperature in Ukraine will plunge to freezing. When President Petro Poroshenko looks at the thermometer, he should be worried. 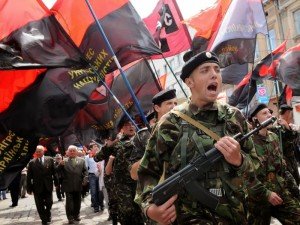 Ukrainians are seething with anger over the plunging quality of life and the government’s failure to purge the country of oligarchy and corruption, the very issues that ignited the 2013-2014 Maidan uprising in the first place. This is not Kremlin propaganda. A Washington Post article in August spoke of the “sense that last year’s wave of protests delivered little but fresh misery”. A recent Atlantic Council report states that “[i]f the Ukrainian government does not follow through with an ambitious reform agenda, public support for reforms will wane while dissatisfaction will increase, threatening political stability and the country’s successful future.” Even George Soros, a stalwart backer of Kiev, wrote this month that “the general population is increasingly dissatisfied both with the slow speed of reforms and the continued decline in living standards.”

If Ukraine were a stable country, this mounting public disillusionment would manifest itself through an unseating of the ruling party in the next election or perhaps through a referendum of no confidence in the administration. But Ukraine — fresh off a revolution followed by 19 months of war — is far from stable. Its citizens have more weapons than they do trust in their government. If the average Ukrainian can’t scrape together enough money to feed and heat his family in the brutal Ukrainian winter, he will blame Kiev (and the West) and express his outrage not at the polls, but in the streets.

Russian President Vladimir Putin is not the only one who would love to see the Poroshenko government fail. Ukraine has an active far-right movement composed of ultra-nationalist groups, organizations that combine radical political agendas (with racist and homophobic overtones) with sizable paramilitary formations. Some of these groups, such as Svoboda, began as far-right political parties that were on the margins of Ukraine’s politics before Maidan. Others, like Right Sector, were formed out of paramilitary groups of street fighters that merged into a movement during the uprising. As the war against Russia-backed separatists unfolded, these organizations formed volunteer battalions that proved crucial in containing the separatists.

As with many things in Ukraine, the far right’s numbers, as well as the extent of Kiev’s control over their battalions, remains nebulous. In July, Right Sector’s Dmytro Yarosh was able to call up around 5,000 members for a march in Kiev, though how many of the participants were fighters as opposed to party supporters is unclear. Likewise, the Azov Battalion, which has been banned from receiving U.S. training and weapons by Congress [sic], has been nominally under Kiev’s control when it comes to fighting separatists; where Azov’s loyalty lies when it comes to facing Kiev is an open question.

What is clear is that these groups are capable of sowing immense chaos and carnage, as was proved on Aug. 31, when grenade-wielding thugs from Svoboda killed four Ukrainian National Guardsmen and wounded 138 others in front of the parliament building in Kiev. This attack was far from the first time that the far right has threatened Kiev or spilled blood: On July 11, Right Sector was involved in a deadly shootout with police in the western Ukrainian town of Mukacheve, and members of several battalions have threatened a coup after the fighting in the east is concluded.

Up to this point, more or less, the far right and Kiev have shared a common enemy: Russian-backed separatists in eastern Ukraine. But as the violence in the eastern regions abates, the ultra-nationalists — including their affiliated (and heavily armed) battalions — are turning their attention inward.

Over the past several months, these groups have been increasingly ratcheting up the pressure on Poroshenko, declaring his administration to be an “internal occupation” and calling, as Right Sector put it, for the “new phase” of the revolution.

Kiev and the far right are at a stalemate. Poroshenko doesn’t have the power to disband the ultra-nationalists (the administration’s response to the Aug. 31 bloodshed has been restricted to a handful of arrests), but the far-right factions aren’t able to openly move on Kiev either. For that, they’ll need to have everyday people protesting in the streets. They need another Maidan.

This is why two narratives are currently battling each other in Ukraine — across op-eds, social media, and news conferences. Poroshenko is exhorting his compatriots to stay calm and look to the future. The far right, meanwhile, is exploiting frustration and anger amid economic hardships and urging people to take to the streets.

In September, IMF chief Christine Lagarde wrapped up her visit to Kiev by praising reforms carried out by Ukraine as “astonishing” and urging Poroshenko and Prime Minister Arseniy Yatsenyuk to stay the course. From a big-picture perspective, Lagarde is correct: Kiev’s accomplishments are remarkable [sic] considering that it had inherited a country saddled with debt, paralyzed with corruption, and bleeding from a devastating war with Russian-backed rebels. The fact that Ukraine hasn’t imploded is in itself a testament to both the Ukrainian people and Western aid.

But the average Ukrainian doesn’t have the luxury of looking at the big picture. Utility tariffs have skyrocketed, as have prices for goods and services and the unemployment rate. The eastern regions are in the middle of a humanitarian crisis, with more than 1.5 million internally displaced people subsisting on the mercy of volunteers and sporadic funding from Kiev’s strained coffers. A July poll showed that only 3 percent of the country is satisfied with the pace of change, while Yatsenyuk, the man responsible for carrying out the IMF’s reforms, has an approval rating of 11 percent.

Each week brings winter closer, making austerity measures such as reduced social services and raised utility fees bite harder. Meanwhile, the far right’s cry will resonate more and more. Perhaps the clearest indicator of this has come from the way in which some of Ukraine’s bigger parties have taken up ultra-nationalist talking points while distancing themselves from Poroshenko. In early September, Oleh Lyashko, the leader of the Radical Party, which officially split from Poroshenko’s coalition, denounced the president as Ukraine’s biggest criminal. Poroshenko’s rival Yulia Tymoshenko went even further, telling the Independent that the administration’s unpopular reforms are going to trigger “an uncontrolled uprising that could sweep Ukraine away as a country”.

This is exactly what the far right needs. Groups like Svoboda function best when they can mix in with crowds, presenting themselves as fighters against corruption and injustice; when a crowd is gathered, any imprudent move on the government’s part will be seen as a move against “the people.” Throngs of protesters are the far right’s fuel, and once they are in place, the country has no shortage of explosives.

Under the most optimistic scenario, a far-right uprising would greatly destabilize Ukraine; Poroshenko wouldn’t be able to continue implementing IMF reforms if he were busy fending off an armed insurrection in the middle of Kiev. At worst, this would set off a chain of events that would rapidly turn the country into a fractured, failed state of 45 million people in the middle of Europe.

To give democratic Ukraine the best chance to survive, Washington must minimize the chances of citizens rising up once winter hits. Statements of solidarity aren’t enough. What’s needed are food, clothing, medicine — tangible, visible, and immediate relief, all stamped with “Courtesy of Kiev and the United States” — to ensure that the people of Ukraine continue to believe that they have a positive future with the West.

This isn’t a novel idea. During the Cold War, the State Department turned it into an art form. From the Berlin Airlift in 1948 to the Russian-language Voice of America broadcasts beamed into the Soviet Union through the 1980s, the United States has a long history of analyzing the situation on the ground, predicting the needs of the population, and acting to win over hearts, minds, and stomachs.

America’s current Ukraine policy has mostly neglected this kind of aid. That’s a shame. Washington has an opportunity to mitigate what the United Nations describes as an impending humanitarian disaster while combating the destabilizing power of Ukraine’s far-right radicals. It’s an opportunity that shouldn’t be ignored, because if angry, starving people take to the streets of Kiev, the result is likely to be most unpleasant, both for Ukrainian and American interests in the region. Meanwhile, the temperature is continuing to drop.