Unanimous support for Ukraine war by parties in Canadian Parliament

On April 29, Canada’s House of Commons held a four-hour, ‘take note’ foreign policy discussion concerning the situation in Ukraine. The discussion was hardly a debate, as ‘take note’ sessions in Parliament sometimes become. No, this was a pat-on-the-back, we’re-all-in-this-together session.

Enclosed is a summary of the non-debate in Parliament, written by a contributor to the Rabble.ca website discussion board called ‘Babble’. The summary has been slightly shortened. 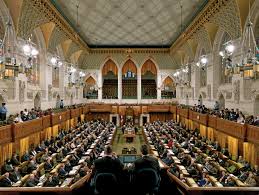 Canada’s House of Commons: A yawning chasm where a debate didn’t happen

Canada has decided to send 200 Canadian Forces troops styled as ‘trainers’ to Ukraine, allegedly to prepare the Ukrainian Armed Forces to defend the U.S.-backed regime in Kyiv (composed of fascists and oligarchs) against ‘Russian aggression’. So reports our national media.

On April 29, a four-hour ‘take note debate’ was held in Parliament to review this decision. Representatives of all parties and the cabinet participated. The record of the proceedings in Hansard is not an encouraging read. Canadians deserve better.

But how appropriate that this discussion of the ongoing situation in Ukraine should be called a ‘take note debate’, when it is highly doubtful many of us did ‘take note’. I’ll share some of my notes in hopes of persuading you to take note.

Since speaker after speaker credited the ultra-nationalist lobby organization, the Ukrainian Canadian Congress, with teaching them  everything they know on Ukraine, perhaps it is only appropriate that we begin with the UCC’s view of this debate. After all, the UCC, perhaps more than anyone else in Canada on the subject of Ukraine, ‘makes it happen’. Here is its article reporting on the debate: Canadian House of Commons holds Debate on Situation in Ukraine, April 30.

Since there is an international agenda to UCC’s domestic one, let’s take a look at their ‘partners’ as well in this press release of the Atlantic Council dated October 9, 2014: the Atlantic Council and the Ukrainian World Congress Partner to Advance a European, Democratic and United Ukraine.

The Atlantic Council is an organization closely associated with NATO, the U.S. State Department and American power. One of those pictured in its release is Natalie Jaresko, a U.S. national, former U.S. State Department official and later CEO of Horizon Capital, an investor vulture-fund. Jaresko is now Ukraine’s Minister of Finance, and is mentioned in the debate.

Her long-time business partner Lenna Koszarny, a Canadian,  is also pictured. She replaced Jaresko as CEO of Horizon Capital. She is Advisory Chair of the Ukrainian Canadian Congress in Kiev, but is referred to in our debate as ‘an accountant’. (Veteran financial writer John Helmer has written extensively on Horizon Capital and the legal and financial difficulties it is facing.)

Perhaps you vaguely recall domestic media reports of Liberal support for the Canadian Forces Ukraine deployment, but the NDP has ‘issues’ outstanding, including demanding a formal debate in Parliament. Perhaps you even expected opposition from the ‘official opposition’. Especially given the serious geopolitical implications involved. Especially after Libya. Here is yet another provocative deployment of Western forces on behalf of one side of a civil war, over the repeated protests and warnings by the Russian Federation.

Perhaps you even wondered if this deployment did not violate the intent if not the spirit of the comprehensive ceasefire signed in Minsk, Belarus on February 12, also called the Minsk-2 Agreement, and UN Security Council Resolution 2202 (2015).

If, as President Poroshenko has clearly stated, the intention of the Ukraine government is to retake both Crimea and Donbas, then we really are moving into a dangerous geopolitical scenario described by Noam Chomsky as ‘three minutes to midnight’.

Ongoing Situation in Ukraine, discussion in Canada’s House of Commons, April 29, 2015 (scroll down the page to 1945 hours)


“Mr Chair… We indicated very quickly after the announcement was made by the government that we would be supportive. I take it from what the defence critic for the NDP has said tonight that his party as well is supporting the training mission that Canada has sent to Ukraine.’ Ralph Goodale (Wascana, Lib)

“This is a friendly debate because we agree with the substance of the issue. The government has already engaged in the areas I mentioned. We encourage it to continue its efforts…” Ms Helene Laverdiere (Laurier-Saint Marie, NDP)

“Mr Chair, I would make reference to the fabulous work that the Ukrainian Canadian Congress has done in terms of supporting members of Parliament on all sides of the House. Information that it provides to us is quite substantial and of great benefit.” Mr Ken Lamoureux (Winnipeg North, Lib)

“Mr Chair, the aid that Canada has been providing is that which will enable the Ukrainian people and the Ukrainian military to elevate their ability to deal with a very aggressive and brutal regime that is endeavouring to take over not only Crimea but that whole area of the world…” Hon Julian Fantino

“I have to thank the Prime Minister. His leadership on this file is head and shoulders above that of most other world leaders. He had a strong role in making sure that we were there to support Ukraine and its people as they got rid of a very corrupt president..” Mr James Bezan, CPC

“The NDP has not asked a single question in question period since the training announcement was made. It has not written me a letter asking for information. Tonight when I spoke, the NDP members did not ask me for details of the training operation. They asked me about logistics in the Ukrainian military and the provision of supplies. What is going on here?

Let us call a spade a spade. The NDP does not want to take a position, because most Canadians support this training operation. The NDP’s ideological base cannot tolerate the notion of Canadian troops operating in any capacity overseas. I think that is what is really happening…” Hon Jason Kenney, CPC

“In terms of what our support for what the government has laid out in support for the troops and training, it was very clear what we wanted to see. It was just very clear goals, ensuring that, it is the professionalism. We are providing what I think we should be doing and being consistent on it, as official opposition, to say , that we understand what the government’s intentions are and we will monitor it closely. We want to ensure the goals are established clearly.” Mr Paul Dewar NDP

“I want to tip my hat to the Ukrainian Canadian Congress for its continued relentless efforts to seek the support of Canadians and the Canadian government to build the nation. I also want to thank the Ukrainian Canadian Congress for the establishment of the Canada-Ukraine Foundation, through which all of us an contribute to the building of Ukraine. I want to commend the Canadian government not simply for stepping forward and providing military training aid…” Ms Linda Duncan (Edmonton-Strathcona, NDP)

“Mr Chair, considering the parties in this House have been remarkably supportive of a mission for which we do not have a lot of information, it is unfortunate that this has turned into some partisan sparring…I support sanctions, but I am also concerned that we have placed Canadian troops into this situation without a discussion in Parliament. I know I may be a very small minority on this point but I am concerned. I would rather see us pursue whatever we can to build the bridges, as I see German leader Angela Merkel attempting to do.” Ms Elizabeth May (Saanich – Gulf Islands, GP)

“Mr Chair, I thought I was going to have 10 minutes so having 5 minutes I will speak a little quicker. We join together. This  is a debate in the spirit of collegiality to say that we stand in unison with the people of Ukraine. I want to especially give a shout-out to Paul Grod and the Ukrainian Canadian Congress, because it has been the Ukrainian diaspora that has been really vigilant and forceful in demanding acccountability and support for Ukraine. I really want to thank them.

“Let me be clear, as my colleagues have been, my colleagues from Ottawa Centre and from St John’s East, that we support the actions of our government in terms of training and professionalization of the military in Ukraine…” Ms Peggy Nash (Parkdale-High Park, NDP)

That last one sounds like he could be someone posting to this Ukraine discussion thread. Recently, the Hill Times reported less than 50 per cent of Canadians supported sending troops to Ukraine. Why isn’t this reflected in Parliament? I hope it is obvious that people need to put their thinking caps on, do their own research, outside of the UCC,  and come up with a principled position. It clearly isn’t to be found in Ottawa.

I suggest that a good place to stop this drive to war is with the Minsk-2 Peace Agreement. Or even better, take to the streets. And don’t vote for any of them. Chomsky is right. It’s three minutes to midnight.