Ukraine’s border separation wall is stalled by bureaucracy, no funds

SENVIKA, UKRAINE–Dubbed the “wall”, the ambitious project to seal up Ukraine’s porous 2,000-kilometre (1,200-mile) frontier with its ex-Soviet neighbour was announced in March 2014 after Moscow seized the Crimea peninsula from Kiev [sic]. But over a year later, only a small fraction of the $250-million (225-million-euro) project that Kiev hopes could help withstand a Russian invasion has been built. 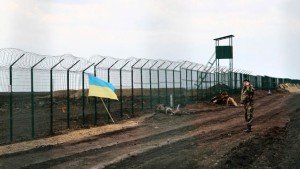 At the Senkivka border post around 200 kilometres north of Kiev, just a few hundred metres (yards) of newly-built wire mesh barriers have been erected. Emblazoned with a large trident, the national emblem of Ukraine, the small checkpoint only saw a dozen or so trucks pass through it in the course of an hour, an AFP correspondent noted in July.

Despite its name, the “wall” is not intended to be a monolithic concrete barrier but instead a highly sophisticated system combining defence measures with modern electronic surveillance tools.

State border service chief Viktor Nazarenko said that the work on the northern section of the fence is scheduled to be completed by 2018. “In three years, this section of the border will be fully equipped to make it impossible to cross the border illegally, either for separate groups of people and vehicles or for armed forces,” he said. 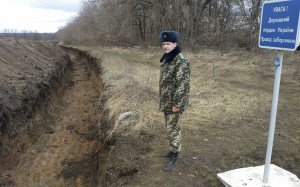 The border between Ukraine and Russia covers 1,974 kilometres. Since the start of the pro-Russian insurgency in east Ukraine after the ouster last year of a Russian-backed president in Kiev, Ukraine has lost control of some 410 kilometres of its frontier in the east. More than 7,000 people have been killed in the fighting.

Kiev’s pro-Western government accuses Russia of pouring arms and troops across the rebel-held part of the frontier to fuel the conflict and insists it will never be secure until its border is back under its thumb.

The project will include “some combat systems to be able to destroy the enemy’s military vehicles and manpower”, Nazarenko said. “It is necessary to keep building the hi-tech border to prevent terrorists, arms and drugs coming in from the Russian side,” Ukrainian Prime Minister Arseniy Yatsenyuk told border service officials last month.

Ukraine began work on the barrier in September last year but the project has been delayed by its enormous cost to the cash-strapped state. Drained by the war in the east, the economy of the country of around 40 million contracted by nearly seven per cent last year and is projected to do even worse in 2015. 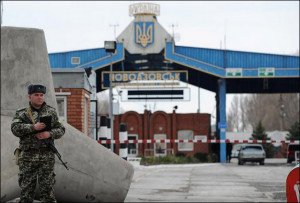 Initially estimated at $1 billion, Kiev was forced to slash the budget for the border fence by 75 percent. Even then, the funding did not arrive on time, leaving some of the construction companies involved in the project out of pocket.

Bureaucratic problems common in post-Soviet Ukraine – in this instance about which state body should oversee the work – have added to the setbacks, with the border service eventually put in charge.

“I ask you to continue to work on the European Rampart project,” Yatsenyuk told the border officials. But analysts have expressed doubts as to whether Ukraine can see the project through.

“In the short term, this project will be difficult to implement primarily for economic reasons,” said Volodymyr Fesenko of Kiev’s Penta think-tank. “It needs huge amounts of money that right now Ukraine doesn’t have.”

The Great Ukrainian Wall: ‘Profanity the West paid for’

The ongoing construction by Ukraine of a separation wall on its border with Russia is sheer profanity, the head of the Russian parliament’s foreign affairs committee said on Thursday. “The impenetrable wall [Ukrainian Prime Minister Arseniy] Yatsenyuk is building to “defend Europe against Russia” has always been a profanation and the West agreed to finance this ditch,” Alexei Pushkov wrote on his Twitter account.

The Ukrainian government had earlier approved a major new program to isolate the country from Russia by constructing an enormous barrier, equipped with anti-tank ditches and remote- controlled weapons stations. The plan includes a project initially called ‘The Wall’ or ‘European bulwark’.

It’s estimated to be worth 4 billion hryvnias (about $200 million) and involves the construction of a barbed-wire fence with 17-meter high steelwork turrets. There will also be four-meter wide, two-meter deep antitank ditches, a lateral route and a drag road, remote combat modules, fortified sectors, observation posts, CCTV cameras, communication towers and alarm systems.

Meanwhile, Kiev remains in negotiations over USD 19 billion in external debt, and is demanding that its creditors write off 40 percent of the principal value as well as freeze interest payments for 4-5 years. Ukraine’s creditors have offered to write off 5 percent of Ukraine’s debt, according to Reuters, although this offer was rejected.