To see what Ukraine’s future may be, just look at Lviv’s shameful past

I used to visit Lviv, the beautiful, cosmopolitan-looking city in western Ukraine with its attractive mix of Italian, Austrian and Slavic architecture. It is in a much fought-over part of Europe and battles swirled around it in both world wars, but its ancient churches and cobbled streets somehow escaped destruction. 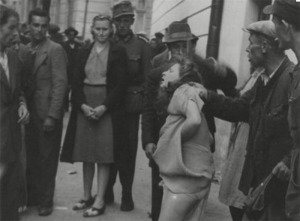 Historical photo of Lviv pogram against Jews and Poles in 1941

Appearances are deceptive because, though the buildings in Lviv have survived, the same cannot be said for most of its inhabitants. In 1939, the majority of the people in Lviv were Poles and Jews, with Ukrainians making up less than one fifth of the population. But the Jews were murdered and the Poles forced by Stalin to resettle in eastern parts of Germany ceded to Poland. Only the Ukrainians remained.

I thought about Lviv again last week when I saw a sentence in a newspaper referring to it as “a bastion of Ukrainian nationalism”. I wondered just how much the writer knew about Ukrainian nationalists in Lviv and the strong evidence that, in 1941, they had played a leading role in one of the horror stories of the Second World War.

This was the Lviv pogrom of 1 July 1941, when thousands of Jews were dragged from their homes, beaten and executed by either German troops or their Ukrainian helpers. Ukrainian politicians and historians have denied complicity, but surviving Jewish victims, other witnesses and contemporary photographs prove that Ukrainian militiamen and mobs of supporters carried out the pogrom, though the Germans oversaw it and committed many of the murders.

Of course, it does not follow that the present generation of Ukrainian nationalists are ideological descendants of pro-Nazi Ukrainians. But the Lviv pogrom and Ukraine’s grim history of sectarian and ethnic slaughter does explain why many in Ukraine fear an ultra-nationalist resurgence. A rabbi in Kiev, Moshe Reuven Azman, last month called on Jews to leave the city and possibly even the country. “I don’t want to tempt fate,” he told the Israeli daily Maariv, “but there are constant warnings concerning intentions to attack Jewish institutions.”

What really happened in Lviv in July 1941 has been meticulously researched – drawing on a wealth of eyewitness information – by Professor John-Paul Himka, a Canadian-Ukrainian historian at the University of Alberta. In a study entitled The Lviv Pogrom of 1941: The Germans, Ukrainian Nationalists and the Carnival Crowd he concludes that the murderous assault on the Jewish community in Lviv – swelled by Jews fleeing the advance of fascism and anti-Semitism in other parts of central Europe – was primarily carried out by the militia of the Organisation of Ukrainian Nationalists (OUN) acting under German auspices. It happened quickly after the German occupation because the OUN wanted to show “the Germans that it shared their anti-Jewish perspectives and that it was worthy to be entrusted with the formation of a Ukrainian state”.

Lviv lies dangerously close to the ethnic, religious and military fault lines of Europe. And, as with other cosmopolitan cities, past and present, such as Beirut, Smyrna, Alexandria and Damascus, it was an excitingly diverse but potentially risky place to live. At different times it has been ruled by Poland, Austria (under the Habsburgs), the Soviet Union, Nazi Germany and, finally, an independent Ukraine. It had been known at different times, depending on which country it belonged to, as Lwow, Lemberg, Lvov and Lviv.

Between 1918 and 1939, it was part of Poland until invaded by the Soviet Union under the Nazi-Soviet Pact. At this time, it had a population of 312,231, of whom 157,490 were Poles, 99,595 were Jews, and 49,747 were Ukrainians. The Jews were well represented among the professions providing most of the doctors, lawyers and businessmen as well as dominating such trades as tailoring and barber shops. In the territory around Lviv, Ukrainians made up at least two-thirds of the population.

The German army captured Lviv on 30 June 1941, the Soviet NKVD secret police massacred several thousand political prisoners in the jails when they realised that the Germans could not be stopped. The next day, the pogrom started with Jews being compelled to dig up the rotting bodies of the dead prisoners. Others were ritually humiliated by being forced to clean the streets with tooth brushes or remove horse manure by putting it in their hats. “Judging by the photographs, gentiles in Lviv found the cleaners amusing,” writes Professor Himka. “To some extent, the pogrom was a carnival.” Women were stripped naked and beaten and hundreds of Jews were forced to crawl for miles to the prisons.

Kurt Lewin, a survivor, left a detailed account of what happened to him in one prison and he described “savage beatings by both Germans and Ukrainians”, said Simka. “One Ukrainian particularly carved himself into Lewin’s memory. Elegantly dressed in a beautifully embroidered shirt, he beat the Jews with an ironclad cane. Strips of skin flew with every blow, sometimes an ear or an eye.” When his cane broke the man chose a heavier piece of wood with which to beat a man to death.

Edward Spicer, 22 at the time, recalled being caught by a group of Ukrainians near his home and taken to a nearby railway station: “First they were beating us all the way, then they pushed us down the staircase, until we were piled up one on top of another five-six high.” Later, the Jews were made to lie on the ground and anybody who moved was killed with a rifle butt. Many were later taken away in trucks by the Germans to be shot.

Professor Himka says the Ukrainians co-operating with the Germans and spearheading the pogrom were members of a militia formed the previous day who often had no uniform and were identifiable only by blue and yellow armbands, worn on the left arm. The Jews were later forced into a ghetto and by the time the Red Army recaptured Lviv in 1944 only 200 to 300 of those Jews were still alive.

The OUN militia did not confine itself to killing Jews. Later in the war, it murdered tens of thousands of Poles in western Ukraine.

I was in Lviv in 2001 when Poland’s National Remembrance Institute was investigating the massacre of 35,000 Polish villagers in 1943. I visited the Polish Consulate where an official named Wicenty Debicki did not directly answer my question about the investigation, but he gave a bit of personal biography. “I was born in Lviv,” he said. “I remember as a small boy having to hide from Ukrainian nationalist groups with my father, in 1944, because we were Poles.”

A Ukrainian woman translating Mr Debicki’s Polish interjected to ask in surprise: “But surely you were frightened of the Germans and Soviets as well?” After a long pause, he replied diplomatically that there was good reason to fear both.

Lviv presents itself as a beautiful city reflecting a culturally diverse past. In reality, it is a monument to ethnic cleansing and the appalling willingness of long-time neighbours to murder each other, as I saw earlier this year in Homs and Damascus – something those who want to heat up the conflict over Ukraine and Crimea’s future should keep in mind.