There is currently a lot of noise about the Russian economy and almost all of it is bad. Many commentators predict that a catastrophe lies ahead and the economic destruction will lead to social instability and eventually a political crisis. But is such a negative view really valid? And is it fair to say that the crisis is either all about sanctions or all about the oil price collapse? Let’s turn down the noise a bit and have a look at the key issues. 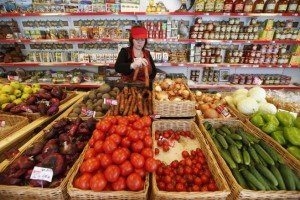 How bad will the downturn get? A decline of about 5 percent over the first two quarters of this year is not an unreasonable expectation as consumer activity and investment spending have already collapsed. In addition, consumer inflation is expected to peak around 15 or 16 percent in the spring, with food inflation probably near double that. The prevailing uncertainty will also depress economic activity.

But forecasts of a full year collapse similar to that of 2009, when gross domestic product contracted 8 percent, are wide of the mark based on currently known facts and trends. Oil trades will certainly be key but also, one must not forget that the ruble collapse is a two-sided story; the weak ruble has helped substantially cut imports and boost demand for some locally produced goods.

People who are now unable to afford to travel abroad for leisure or health care will spend more at home. This trend is one reason why the manufacturing and agriculture sectors were much better in 2014 and helped keep the GDP indicator marginally positive at about 0.5 percent growth. That will also be the case this year and a more reasonable assumption is for a full year decline of about 3 percent.

Is the ruble now at a floor, or could it fall further? The short answer to that question is, at least over the next few months, “the ruble will move with the oil price and very little else.” In 2014 the ruble remained stable through March to the end of August even as sanctions tightened and economic indicators weakened. The ruble cracked when the oil price started its steep decline from late August.

Will the Central Bank try to prevent further weakness? Most unlikely. For sure the negative impact of the weak ruble is clear for all to see, in terms of rising inflation, higher interest rates and negligible inward investment. The Central Bank did burn through $124 billion of foreign exchange reserves last year, but $80 billion of that was in an effort to prevent a panic free-fall since the oil price started to collapse and during December’s frenzy.

Bear in mind that the weak ruble has made a big difference to the course of this crisis compared to that of 2009. The ruble decline protected federal budget revenues in 2014, allowing for a small full year surplus, and while a spending deficit of 2.5 percent of GDP is forecast for this year, it should not be worse as the ruble will again provide partial compensation for lower foreign currency revenues.

There is also an important political element at play here as the weak ruble impact on the budget means that pensions and most public sector salaries can be indexed to protect President Vladimir Putin’s core support group from the ravages of double digit inflation.

In which direction will oil trade? Any answer about the oil price has to come with a huge caveat — there are far too many variables in the equation, both economic and geopolitical, for anybody to be sure. A reasonable assumption is that the medium term trend is still down, albeit maybe with some greater volatility.

A testing of the 2009 low of $42 per barrel (Brent) is very likely this quarter. But a significant difference this time is that OPEC producer country budgets have all changed since 2009, typically they now need $100 per barrel to balance with many a lot higher, while U.S. shale oil and other non-OPEC producers need a high average oil price to justify continued investment.

So we should start to see supply slippage within a few months. For example, Russian oil output may slowly slip by 200,000 to 300,000 barrels this year with oil averaging below $50. Therefore, even without some major OPEC action, a price rally in the spring or summer is probable.

What matters more, sanctions or oil? Oil is the most important factor. While many commentators equate Russia’s current economic plight with sanctions, that is not the case.

If oil had stayed near $100 per barrel, the ruble would still be below 40 against the U.S. dollar, inflation and interest rates would both be below 10 percent and liquidity would not be an issue for the banking sector. There would be no talk of a financial crisis. What that means is if sanctions remain but oil rallies then the crisis will ease, while if sanctions are removed but oil stays low then the positive impact will be muted.

Is there a danger that Russia defaults? No. A cut in the country’s credit rating to junk status is possible but not because of the historic criteria of “willingness and ability to pay.” The credit rating may be cut because of the poor economic performance, the slow pace of reforms and the reliance on oil.

A positive trade balance and current account balance boost reserves so any suggestion that the country does not have enough money to ride out a crisis, or to fund the major banks, for many years is simply wrong. It doesn’t mean that it will be any easier for small- and medium-sized businesses, or individuals, to get credit or that we may see a lower interest rate anytime soon, but Russia Inc. is fiscally safe, albeit in recession.

If oil rallies and sanctions end, will the economy return to boom times? This is the bad news bit. The answer is no. Recall that neither sanctions nor lower oil actually caused the slowdown in the economy. The events of 2014 only made a pre-existing condition worse. The economy had started to slow down from early 2013.

It has become obvious that the country needs to create a new driver of growth based on a large and sustainable increase in investment. Getting that investment was always going to be a tough task and the events of the past year and legacy of this crisis will make it much more so.