Ukraine is now investigating nationalists complicit in the ‘snipers’ massacre in Kiev in February 2014. The arrow points to the far-right Svoboda Party which is participating in the October 25 local elections. 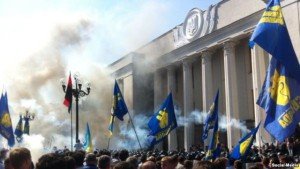 MOSCOW–The right nationalist party Svoboda (Freedom) aims to be represented in a number of Ukrainian City Council after Sunday’s local elections, but currently the party’s extra-parliamentary activities that attract the most interest in Ukraine.

For 20 months after snipers on and around Kiev’s Independence Square, killing more than 100 protesters and police officers are members of the party in the authorities’ attention in the investigation of the massacre.

The case is still far from being fully resolved, but members of the police special forces Berkut stands accused of the bulk of the killings.

However, only foot soldiers who are behind bars in Kiev – both the superiors in the police force and policymakers have long since fled the country, mainly to Russia. 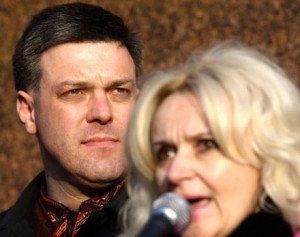 Raids earlier this month of top people of Svoboda have now opened a second front in the investigation of the killings that sparked a dramatic change of power in Ukraine.

“It’s a real time bomb,” says Ivan Katchanovski from the University of Ottawa about the investigation of Svoboda.

“This is the first set directly Svoboda with the mass killing of demonstrators and reveals that snipers shot from the 11th floor of the Hotel Ukraine from a room where one of the Svoboda members was living,” says the Canadian-Ukrainian university lecturer who has been working on detailed maps of the events in central Kiev in February 2014.

Also according to Katchanovski, another investigation of the far right is taking place in connection with last year’s massacres in Kiev. A member of ‘Vikings’ group with links to the radical network Pravyj Sector is suspected of killing four police officers.

Svoboda is one of the oldest groups on Ukraine’s well-armed right wing and is described by various sources as everything from the right to the nationalist neo-Nazi. The party has six members in the Ukrainian parliament and for a time last year was represented in the government. Now it is suspected in several cases to have engaged in violence.

It is a member of the party who stands accused of having thrown the grenade at the Ukrainian Parliament, on August 31 of this year, killing four policemen and injuring more than 100.

Two activists also connected to Svoboda are suspected of the killing of the pro-Russian [sic] journalist and writer Oles Buzina in Kiev in April.

During the recent election campaign, however, the party invested a lot of money and effort to paint a more moderate image of themselves, says political analyst Jaroslav Kovaltjuk from the think tank ICPS in Kyiv.

In last year’s Ukrainian parliamentary elections, October 2014, Svoboda did not reach the five per cent threshold for party lists to win seats in Parliament. But some of its member did win election in a handful of single-member constituencies.

The party is now directing its full attention to the October 25 municipal elections. [1]

“Much is at stake for Svoboda in these elections and the expectation is that they will win seats on the city councils of Kiev and several cities in western Ukraine,” says Jaroslav Kovaltjuk.

In general, support for the nationalist forces is greatest in western Ukraine, while it is harder to win support in the capital.

Unlike Svoboda, the second major organization in Ukraine’s extreme right, Right Sector, not in local elections.