May 6, 2015
By New Cold War.org, May 6, 2015–Unique film footage of how Berlin looked and how it was returning to life after war in the summer of 1945 has recently been posted to ‘Berlin Channel’ on YouTube. The film footage was shot only months after the capitulation of Nazi Germany on May 9, 1945. 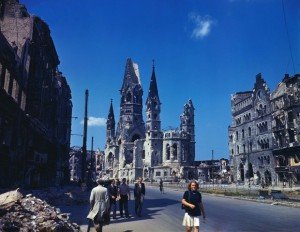 Pictured in the seven-minute video is the awful damage to Berlin caused by the crazed, last-ditch resistance by the doomed Nazi regime to the approaching armies of the Soviet Union. Yes, that’s correct, mainstream media. Contrary to what many of you report, the battles which decided the outcome of World War Two were not fought in western Europe. No, they were fought on the territories of the Soviet Union and other countries of eastern Europe. Eighty per cent of the civilian and military casualties of World War Two in Europe were suffered there. In the end, it was the Soviet army that liberated Berlin, the seat of Nazi power.

All of this is worth recalling as, unbelievably, war returned last year to the hallowed fields of eastern Ukraine. This present war is aided and abetted by the same NATO imperialist countries that quietly watched–some even cheered–some 85 years ago as the Nazis brutally rose to power in Germany in 1933 and then set out on a path of European conquest. Will the world stand by if the extremist, ultra-nationalist regime in Kyiv and its extremist paramilitary battalions decide to break the ceasefire agreed to on February 12 and resume warfare? Will the governments of NATO countries get away with their continued encouragement of Kyiv? Peace and justice loving people can prevent that by organizing against war in eastern Ukraine and in solidarity with the people throughout Ukraine who are fighting against Kyiv’s war and austerity agenda.

The video of Berlin in 1945 has been produced and colorized by Chronos Media. Watch it here, or by clicking the screen below.