Prime Minister Aleksandr Zakharchenko gave a press conference on September 1, 2015 (date corrected) to explain the plans of the government of the Donetsk People’s Republic to hold district and municipal elections on October 18. View a 12-minute recording of the conference, with sub-titles, here, or click on the screen below (broadcast was sub-titled on Sept 12, 2015). 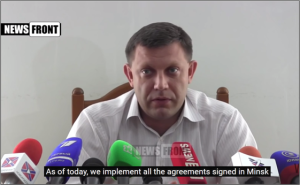 The prime minister denied rumours that officials of the DPR are planning to hold a referendum asking to join the Russian Federation. “These rumours are distributed by Ukrainian mass media,” he said.

“Local elections are planned in accordance with the Constitution and legislation of the Donetsk People’s Republic. These totally and completely comply with the letter and spirit of the Minsk agreements {of Feb. 12, 2015]”

“Kyiv authorities have said that these elections have no juridical force. This is not true, since we carry them out according to the Minsk agreements.

“It was emphasized (at Minsk) that elections should be coordinated with us. But this hasn’t been done [by Kyiv]. So we carry out ourselves the elections according to the Minsk agreements,” Zakharchenko said.

In his three minute opening of the press conference, Zakharhenko reviewed the opening of the school year in Donetsk on September 1. The vast majority of schools succcessfully opened.

Zakharchenko explained that foreign observers, including of the OSCE, will be invited to observe the Oct. 18 elections.

He also commented on the deadly riot by extreme-right forces on August 31 that killed three policemen and injured many other police and journalists in front of the Verkhovna Rada in Kyiv.  “The last Maidan (January-February 2014] used Molotov cocktails, batons and chains and some pistols and sniper rifles. Now, grenades and rifles were used in a new round of protests.

“Congratulations, [President] Poroshenko. You’ve equipped your people with weapons and they are now used against you.

“I think Kyiv needs conflict in this situation. And I will explain to you why…”