Western media has published yet another doom and gloom article on Crimea, repeating a worn theme that surely, by now, the people of Crimea must be reconsidering their vote 21 months ago to secede from Ukraine and rejoin the Russian Federation. 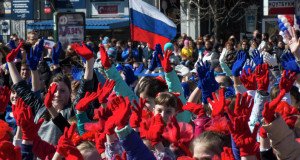 The article was published in the New York Times on Dec 1 and is titled, ‘Months after Russian annexation, hopes start to dim in Crimea‘. This one  has to skate around an new, added twist to the Crimea story: the electricity and commercial road transport blockade that has been mounted by small numbers of the extreme-right in Ukraine but endorsed by the governing regime in Kyiv while Western governments turn a blind eye.

SHCHYOLKINO, Crimea–When residents in this typical Soviet factory town voted enthusiastically to secede from Ukraine and to become Russians, they thought the chaos and corruption that made daily life a struggle were a thing of the past. Now that many of them are being forced to cook and boil drinking water on open fires, however, they are beginning to reconsider.

The article employs time-honored methods for when a pre-determined, negative theme is required and important facts must be obscured.

One, find disgruntled citizens in the street and cite them. That’s not difficult to do–is there a country in the world without many unhappy citizens? The Times writer cites two such people in his article.

Two, make it appear that the disgruntled citizen(s) speaks for large numbers of his or her fellow citizens.

Three, negative imagery is important. Thus we read in the Times article, “Twenty months after the Kremlin annexed the Black Sea peninsula amid an outpouring of patriotic fervor by the ethnic Russian population, President Vladimir V. Putin’s promise in April 2014 to turn it into a showcase of his rule now seems as faded as Crimea’s aging, Soviet-era resorts.” Very evocative–‘aging, Soviet-era resorts’. This recalls New York Times reporting of aged-looking buildings in Cuba during the decades of the U.S. embargo of the island. The embargo made it difficult for Cuba to manufacture or obtain paint and building materials; such things as public health care, public education, international aid and solidarity, and national defense took priority. So yes, this writer visited Cuba three times during the 1990s and, indeed, many buildings in Havana looked aged. But the spirit of the people and the outlook for the country was anything but tired and worn out. To my eyes, the people were much more spirited and forward looking compared to what I experienced in wealthy Canada.

Four, the key word in all reporting of Crimea is “annex”, as per the above citation. The people in Crimea voted overwhelmingly in March 2014 for secession from Ukraine, following a violent, right-wing coup against the elected president of that country (a president for whom a large majority of Crimeans had voted in 2010). The secession referendum was organized by the elected and constitutional Crimean legislature, whose legality contrasted sharply with the illegal, coup regime which came into power in Kyiv on Feb 21, 2014. Crimeans have affirmed in survey after survey that they are satisfied with the secession decision. Yet, Crimeans are presented in the Times as hapless people who have been “annexed” by Russia. The Times reference to the secession as happening “amid an outpouring of patriotic fervor” suggests that the people were so swept away by fervor as to be too dumb to realize what was really taking place. They were not choosing a future of their own free will; no, they were undergoing “annexation” without even being aware.

Five, blame the victims for their plight. Thus we read in the Times article , “… people here are not sure whom to blame more for their predicament: the Crimean Tatar activists and Ukrainian nationalists who cut off Crimea’s link to the Ukrainian power grid or the local government officials who claimed to have enough power generators stored away to handle such an emergency.” Here we have an absurd spectacle of the Crimean government being blamed for failing to foresee and prepare for the day that right-wing extremists in Ukraine would blow up the electricity transmission lines serving the peninsula. Even more recklessly, the Crimean government failed to foresee that the blowing up of transmission lines by right-wing terrorists (oops, “cutting off of Crimea’s links” by “activists”) would be endorsed and escalated by the regime in Kyiv and that Western governments would turn a blind eye and Western media would largely be silent.

Six, and finally, choice of headline to convey the negative message is key. In this case, we have “hopes start to dim”. In reality, the Times headline joins a long parade of such headlines. Pick a typical, negative word, use it alongside the word “Crimea” in an internet search, and, voilà, you arrive in a world of negativity over prospects for Crimea. Here is a small sample of the trade in negative Crimea headlines and stories:

Oddly–well, not so oddly–the last article in this list was about Crimean citizens trying to take back into public control Black Sea waterfront land which had been lost during Crimea’s time in post-1991 Ukraine.

Funnily enough, the Times article concludes with a quotation from a Crimean woman that is supposed to show that Russians are naïve and habitual complainers who always blame others for their failings and shortcomings. But the quotation is the closest thing to truth in the entire article (leaving aside the suggestion that the extreme rightists in Ukraine who blew up electricity lines are “Tatars”):

As often happens in Russia, some blame Washington rather than Moscow or Kiev.

“If it wasn’t for the Americans, none of it could have happened. The Tatars, who are supported by the United States, would not do a thing,” said Tatyana Bragina, 57, an energetic woman who also once worked construction at a nearby, unfinished nuclear plant.

“Please write that we are not desperate. On the contrary, we are full of joy,” Ms. Bragina said, standing near a black iron kettle boiling away in the courtyard of her apartment block.

Russian legislator Konstantin Kosachev has said that Kyiv’s electricity and road-transport blockades against Crimea constitute a “gesture of final farewell” to Crimea. 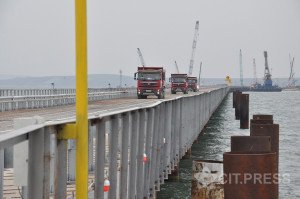 Update: Russia is racing to construct electricity, natural gas, road and rail links to Crimea across the 3 km wide Kerch Strait, which  separates the Sea of Azov from the Black Sea. The first of the electricity began to flow through a 200MW cable on December 3. A second supply cable of 200MW is due to open on Dec. 21. Crimea will be fully supplied with electricity by the summer 2016. Soon after that, it will be producing its own electricity courtesy of the gas pipeline under construction. By 2019, the road and rail bridge will begin to operate.