Justin Trudeau may have missed the memo, but now Vladimir Putin is West’s best friend

In the post-Paris war on terror, villains have been miraculously transformed into friends and vice versa. Speaking in Manila Wednesday, U.S. President Barack Obama praised Russian President Vladimir Putin as a “constructive partner” in the international attempts to end Syria’s civil war — a war that has allowed ISIS to thrive. 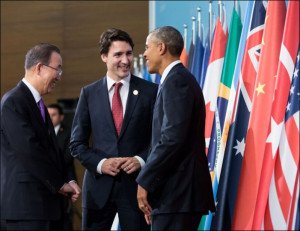 War has a funny habit of changing things. Just a month ago, Russian President Vladimir Putin was routinely lambasted in the West as a thug and bully. Now, in light of the Paris attacks, the Russian President has miraculously been transmogrified into a man of stature — an important ally in the battle against Islamic State (ISIS) militants.

Meanwhile, French President François Hollande is planning a pilgrimage to Moscow next week where he is to meet Putin and forge a common front against ISIS. Since the ISIS-linked attacks in Paris Friday, France and Russia have been co-ordinating their military efforts in Syria.

According to news reports, so have Russia and the U.S.

In effect, Hollande and Obama are signalling they need Russia, which since September has been conducting its own massive military intervention in the Syrian civil war.

At one point, the New York Times calculated that Russia was conducting as many air strikes in one day as the entire U.S-led coalition did in a month.

Almost no one on the international stage talks any more of Russia’s illegal intervention in Ukraine. Except of course Canada. Perhaps Prime Minister Justin Trudeau didn’t get the latest memo. Or perhaps he’s putting principle over practicality. Or perhaps he’s trying to stay politically onside with Canada’s vocal Ukrainian community. 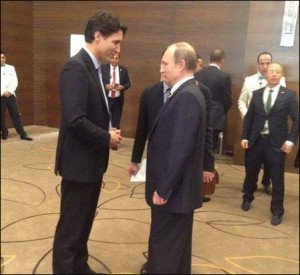 But when he met Putin briefly at the G20 economic summit in Turkey last weekend, Trudeau didn’t remark on either the Paris outrage or Syria. As he later told reporters, he instead chastised Putin, telling him that “Russia’s interference in Ukraine must cease.”

This was the position that Trudeau took during the election campaign, when he dismissed Putin as a “bully.” And it echoed the language of former prime minister Stephen Harper, who made headlines last year after he told Putin at an international meeting: “I guess I’ll shake your hand but I have only one thing to say to you: You need to get out of Ukraine.”

At that meeting of world leaders, Putin was so isolated he had to eat lunch by himself. Now, world leaders are lining up to break bread with the autocratic Russian president.

But Putin isn’t the only one undergoing the process of re-definition. Russia’s client, Syrian dictator Basher Assad, is no longer routinely dismissed by the West as a monster. Few praise Assad. But there seems to be a general recognition that nothing useful can be accomplished in Syria without his involvement.

Other former villains on the road to redemption include Iran, which commands much of the ground war in Iraq against ISIS and backs Assad.

Hezbollah, the Lebanese anti-Israeli militia, is also a de facto ally in the struggle against the Islamic State. But I doubt that any Western leader will ever admit it.

Conversely, the war with ISIS is subtly redefining the West’s friends. Turkey is a long-time NATO member and — on paper at least — a staunch ally. But it spends much of its time bombing or shelling Kurdish fighters in Iraq and Syria — including those fighting ISIS.

Canada is training Kurdish fighters. Trudeau has promised to send more military advisers to help in this task. Yet the Kurdish factions fighting ISIS include one linked to a group that Canada officially regards as terrorist.

Finally, the Saudis. On paper they, too, are staunch allies of the West. But Saudi Arabia is more interested in bombing rebels in Yemen that it views as Iranian proxies than it is in combating ISIS. Money from wealthy Saudis is said to have helped finance ISIS. A 2009 U.S. State Department memo later released by Wikileaks said that donors in Saudi Arabia constituted “the most significant source of funding to Sunni terrorist groups worldwide.”

We claim to know who the enemies are in this latest iteration of the war on terror. But who, exactly, are our friends?

Read also, in New Cold War.org:
Ill-informed first words on Ukraine by Canada’s new prime minister, by the editors, New Cold War.org, Nov 17, 2015
Does the Liberal Party election slogan of ‘ready for change’ apply to its policy on Ukraine? Or will the new government be captive to the right-wing Ukrainian-Canadian lobby and its representative in the cabinet, Minister of International Trade Chrystia Freeland (Toronto Centre)?